Richard E. Grant was at one of his favorite restaurants in London, having dinner with his daughter, when suddenly both burst into tears. The management rushed over: what was wrong? Nothing. Grant had just been nominated for an Oscar, for his supporting turn as a colorful accomplice in the literary biopic “Can You Ever Forgive Me?” (To celebrate, the staff comped his meal.)

Grant, the British actor whose lengthy résumé encompasses villains both ridiculous (“Spice World”) and sci-fi (“Logan”) along with episodes of “Downton Abbey” and “Doctor Who,” and the forthcoming “Star Wars: Episode IX,” was uncharacteristically agape at being a first-time honoree. “Actors, mid-50s onwards, your parts, your salary, it’s diminishing returns,” he said. “I’m almost 62 years old. I’ve never been nominated for anything. So it’s beyond anything I could even begin to imagine.”

A few minutes after he got the news, he was on the phone with his co-star Melissa McCarthy, nominated for best actress for her unusual dramatic turn, as the writer-turned-forger Lee Israel. “She could barely speak either,” he said. “We were just a blub fest. No shame in being a grown man crying.”

[Read more about the nominations | Check out the full list of nominees | See the snubs and surprises.]

The film, a period piece based on Israel’s memoir of the same name, traces her path from biographer to literary counterfeiter, convincingly faking signatures and letters from the likes of Noël Coward and Dorothy Parker until she was eventually busted by the F.B.I. It’s an unexpected story to see onscreen: both stars are somewhat unlikable. 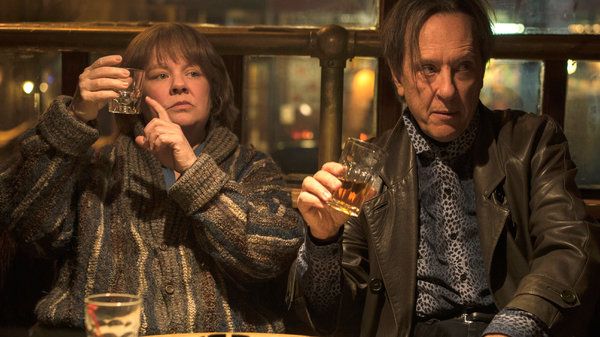 “I’ve been surprised at how generous audiences have been in kind of taking these two near-destitute, on-the-fringe criminals, full of loneliness and despair in early ’90s New York, that people have rooted for them and identified with them,” Grant said. Their misfit friendship struck a chord.

His character, Jack Hock, is based on a real person, about whom very little is known; he was gay and had AIDS. “I think the assumption was, he’d been disowned by his family — there are no photographs of him. What little there is is featherweight information in Lee Israel’s actual memoir,” Grant said. His performance, he added, is “an homage to those men who died in the ’80s and ’90s, before there seemed to be any possibility of an antidote.”

But Grant has brushed up against Israel’s contemporaries. “I met somebody at a Screen Actors Guild screening in New York last week, who said that in real life she was far grumpier and far more deadly than Melissa McCarthy portrayed her,” he said, “and that her apartment was an absolute pit of filth. He said it seemed quite sanitized in the film, but I don’t know that you could take an audience further into that Hieronymus Bosch territory.”

Grant has been unusually – and hilariously — unfiltered on the awards circuit; even with McCarthy, he’s the uproarious one in the room. “I was born without that button, that filter in your brain that stops what comes into your brain from going out of your mouth — to my cost, sometimes,” he said.

So, what does he make of his first go-round on the path to the Oscars?

“What nobody warns you about is that when I went as a complete innocent to the Telluride Film Festival, where the film premiered, at 4 o’clock on a Saturday afternoon, I had no idea that five months later, I would still be banging the drums for the film,” he said. “I had no idea that when someone said to me, you do realize it’s on a campaign, and you will not be earning any money — though you will be royally looked after. But what’s money? This is much better, because the response and approbation has been a once-in-a-lifetime opportunity.”

Moneywise, he could always do a sequel to “Spice World.” Is that in the works?

“No. But as Posh Spice is unavailable for the reunion world tour, I’m going to be taking over her for, as Posh Old Spice. I’ve got my legs in training as we speak.”