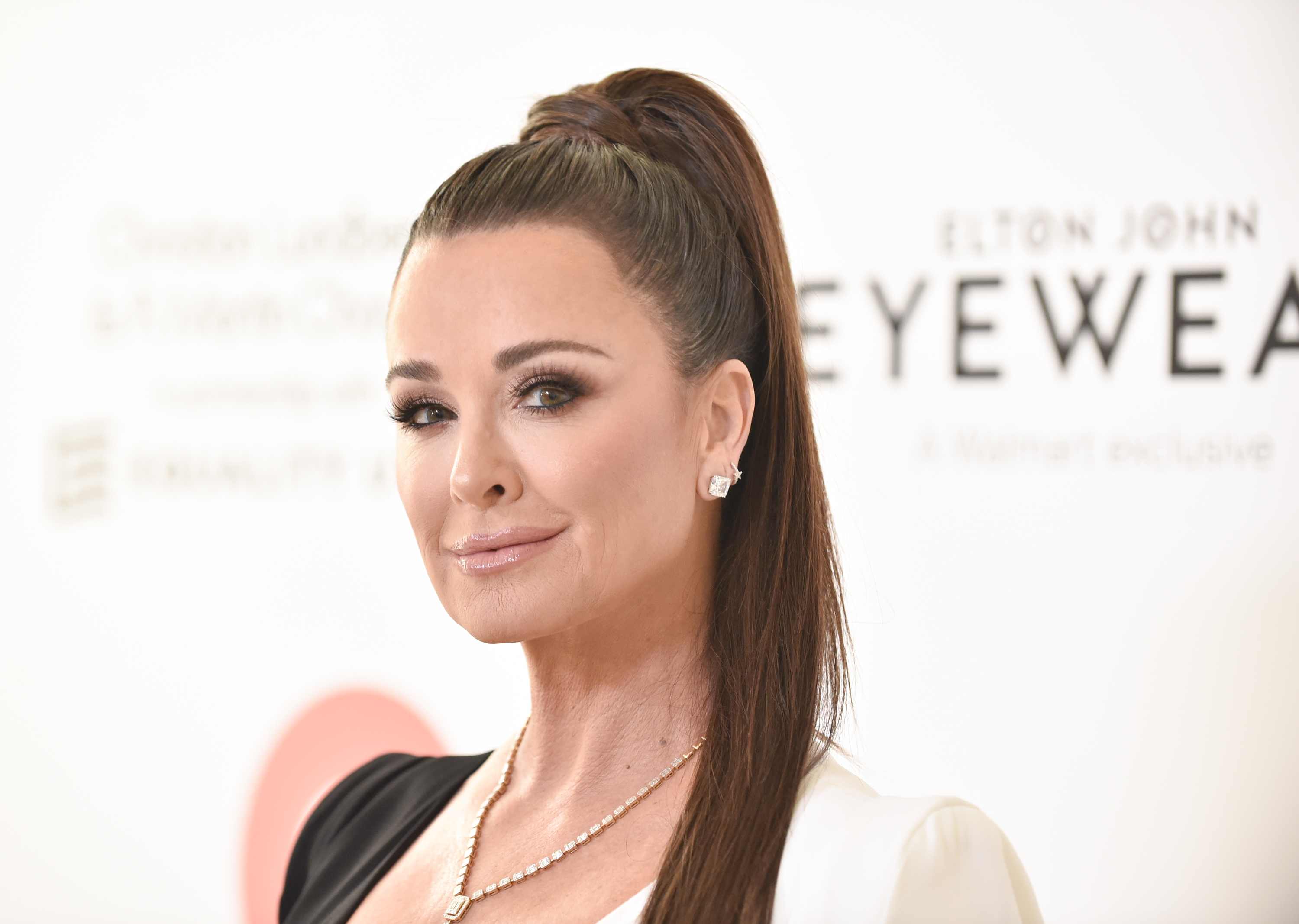 Real Housewives of Beverly Hills star Kyle Richards has addressed the backlash she received ahead of the upcoming episode, in which she appeared to make light of co-star Erika Jayne Girardi swearing at Garcelle Beauvais’ teenage son, Jax.

Footage from the next instalment, which will air on Bravo on Wednesday before landing on hayu, emerged on social media this week, showing the continuing drama from Garcelle’s birthday party.

One clip showed the moment the Pretty Mess star was sat beside castmate Dorit Kemsley at the end of the bash, when the Coming To America actress’ 14-year-old son approached them to get some flowers.

Jax was left unhappy by the interaction, with Dorit telling the camera that she felt ‘sick to her stomach’ over the shocking moment.

However, another preview video showed the budding fashionista and husband PK laughing about the incident in a chat with Kyle and her partner, Mauricio Umansky, as they all commended Erika for ‘loosening up’.

The clips caused outrage on social media, with the couples trending on Twitter as viewers called them out for making light of their pal’s son being sworn at.

Speaking to Metro.co.uk while in London with hayu, Kyle spoke out against the reaction and revealed that she has not been able to apologize to Garcelle just yet.

‘I didn’t even see Erika say that, I was told the next day,’ she told us. ‘I was laughing at a friend’s drunken behavior as one does sometimes. Nothing to do with disrespecting anyone’s child especially.

‘I’m a mom of four daughters. I think if I had obviously seen it – because I only saw it actually last night on Instagram, that clip – I would have a different reaction.

‘But when you hear a story like that, you’re like, “Oh my God!” I laugh sometimes at the wrong moments, but it wasn’t about Garcelle and her son, it was about Erika.’

The Halloween Kills actress confessed that she wasn’t ‘used to seeing’ that side of Erika, who has been notably guarded since she first arrived on our screens in 2015, on season six of RHOBH.

‘Especially when you’re not used to seeing that, you hear a story the next day, “Oh my God, so and so was so drunk, they did this and that,” and we laughed, it was like that,’ she continued. ‘To think that someone misinterpreted it as that, that I didn’t care and being flippant about someone’s child…

‘I would hope that after 12 years on this show [that] people know me better.’

When asked if she had managed to discuss the scenes with Garcelle, Kyle explained that she had not been able to just yet, due to the time difference between London and LA.

‘She just saw the clip for the first time too,’ she said. ‘Actually no, because I’m in London. I don’t know what time [it is], it’s 2am or something right now, I’m not even sure.

‘But that’s my plan, in between interviews today, to send her a text.’

‘In the beginning, I found it to be nice and refreshing,’ the Housewives OG reflected on Erika’s change in behavior. ‘It’s so funny, when I watch the show, I’m like, “So nice to see Erika finally loosening up”.

‘I didn’t know she was literally speaking to herself on the boat, she seemed out of her mind. It was cutting back and forth to me saying, “It’s so nice to see her relax and loosened up”.

‘In the beginning, honestly it was refreshing to see her just not be so guarded and stiff. But then it got a little too far, obviously. Then it wasn’t so appealing anymore.’

Kyle and co were slammed across social media when a preview showed them appearing to make light of Erika’s antics with Garcelle’s children – with many questioning whether they would react in the same way if their own children had been present instead.

‘I mean it’s not funny, but it is funny,’ she said in the footage. ‘I like seeing this more relaxed side of her.’

Her husband also declared, ‘it’s great that she did that,’ as they all began laughing.

‘It’s really why I can give a major pass and of course, it’s not my child,’ Dorit added. ‘She had a few drinks, she doesn’t get like that…

‘I don’t think I can ever remember a time where she was that loose and free.’