Gail – who dated Keith between 1999 and 2000 – simply wrote "heartbroken" after learning the Firestarter star, 49, had been found dead at home this morning. 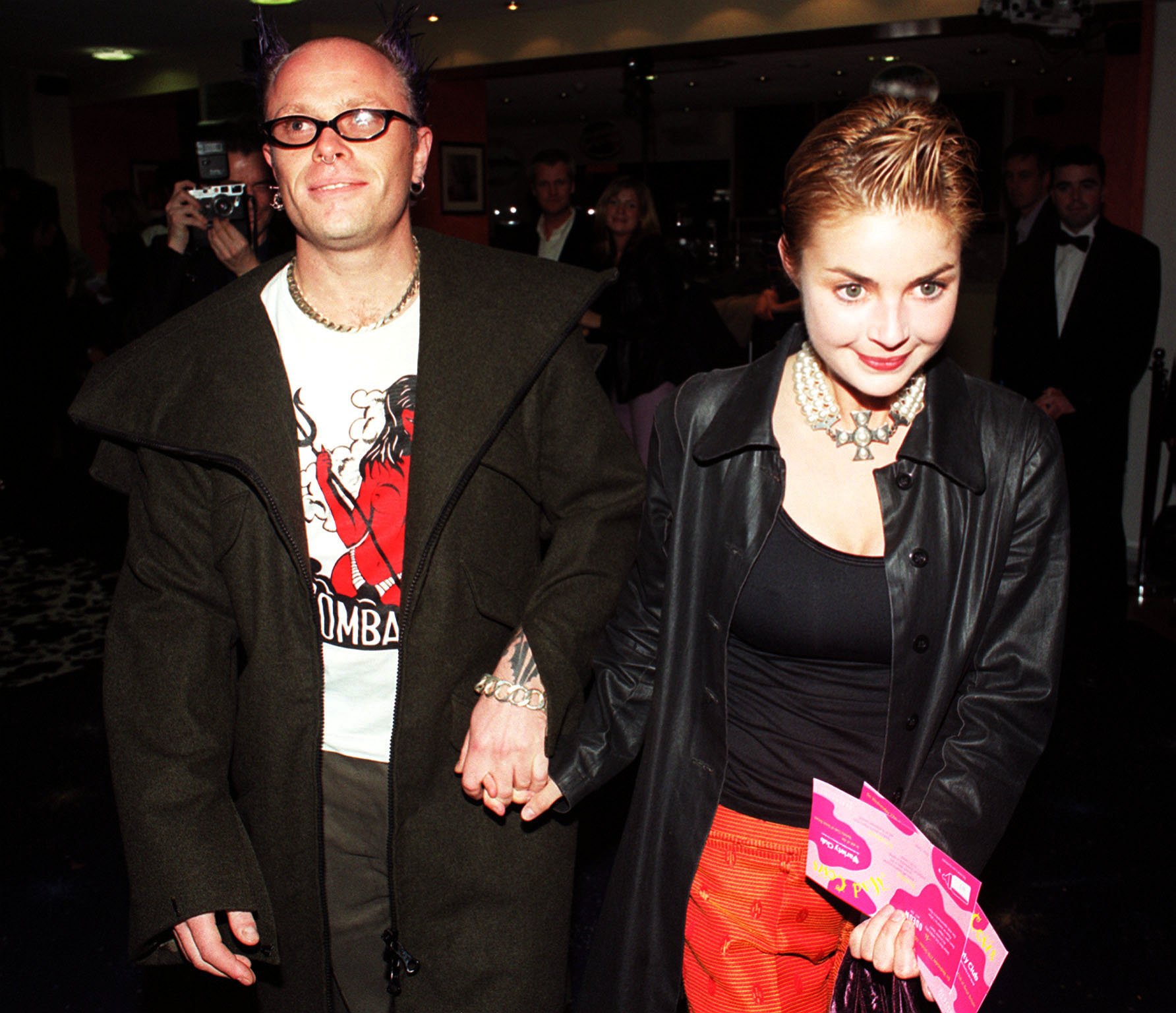 The couple were introduced by DJ Sara Cox and were once dubbed "Beauty and the Beast" due to his distinctive hair and wild music videos.

At the time, Gail was a TV presenter famed for her wholesome image but she insisted Keith was different to his Prodigy persona.

She also hinted it was her who preferred nights out, while the music icon loved having nights in.

Speaking in 2008, Gail, who is now married to Toploader guitarist Dan Hipgrave, said: "He was lovely and gentle and oh I still am so fond of him."

Gail joined celebrities including Rita Ora, the Appleton sisters, Jo Whiley and Ed Simons from The Chemical Brothers in paying tribute to the Prodigy legend.

'HE TOOK HIS OWN LIFE'

Keith's bandmate Liam Howlett spoke of his devastation and confirmed his friend had taken his own life.He wrote: "The news is true, I can’t believe I’m saying this but our brother Keith took his own life over the weekend.
"I’m shell shocked , f***in angry , confused and heart broken ….. r.i.p brother Liam #theprodigy."

Rita Ora posted a pic of him and captioned it "RIP Keith Flint", while Matt Willis, who attended Keith's 2006 wedding, called the reports of his death "devastating news", adding that he considered the frontman a "hero" and he was "so very sad".

Jodie Marsh posted that she knew Keith personally from Essex, writing: "He was such a lovely man and a massive animal lover. We used to speak at length about our love of dogs. I'm gutted and in shock!"

a life changing moment when I went to my first ever gig to see The Prodigy so it’s sad to hear of Keith’s death today. Such a big part of my formative teenage years, posters on my wall, learning the lyrics on the bus home from school and torturing my parents with Fat Of The Land. They don’t make em like that anymore. 💕 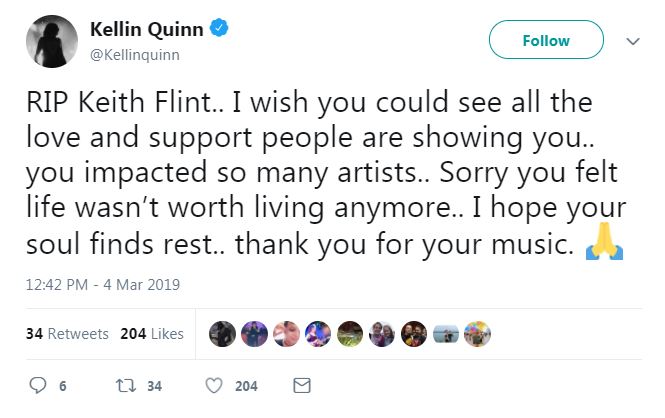 She added: "Prodigy was also such a huge part of my childhood. So upset."

Chase and Status posted: "Absolutely devastated to hear the tragic news that the legend Keith Flint from @the_prodigy has passed away. Our thoughts & condolences are with all his friends and family. We wouldn’t be here if it wasn’t for Keith and the life changing music they made and championed. RIP"

Radio 2 DJ Jo Wiley paid tribute, saying: "Oh this is sad news. The death of Keith Flint. Whenever our paths crossed he was an absolute sweetheart. Really lovely. Incredible iconic frontman with a soft centre."

Radio One's Nick Grimshaw told his Instagram following how he grew up listening to the band. He wrote: "A life changing moment when I went to my first ever gig to see The Prodigy so it’s sad to hear of Keith’s death today. Such a big part of my formative teenage years, posters on my wall, learning the lyrics on the bus home from school and torturing my parents with Fat Of The Land. They don’t make em like that anymore. ?."

Former Million Dead frontman Frank Turner posted that he was "absolutely gutted to hear about Keith Flint's passing. One of the greats. Best live show I ever saw. RIP."

RIP Keith – ICON – taken just after a festival in Czech Republic. They headlined. I remember being side of stage shouting “I can tell people I supported the Prodigy!!!” Meant so much to me. An absolute gentlemen 💔 one of a kind 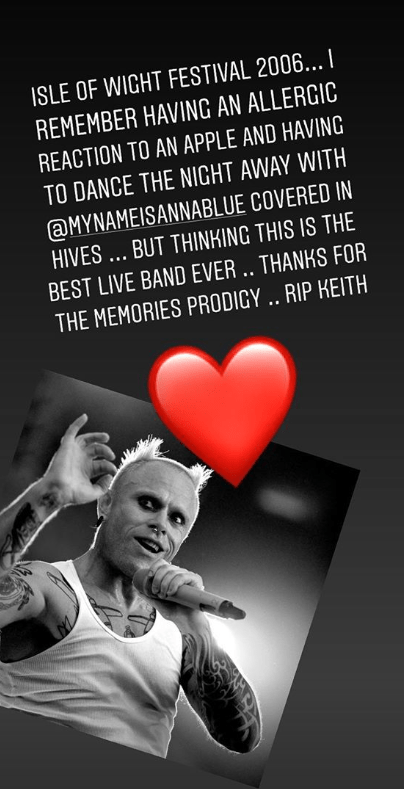 Singer Beverley Knight wrote: "I just heard, and I am heartbroken. Once the most innovative, fearless, ballsy bands to grace a stage and Keith was perfection up front. We have lost a Titan. #KeithFlint #Prodigy."

Ed Simons of The Chemical Brothers tweeted: "Oh gosh, so sad to hear about Keith Flint, he was always great fun to be around and very kind to Tom and I when we first started doing shows together.. great man."

"The Prodigy were one of the first big bands we supported years ago and Keith single-handedly shattered my presumption that big stars would have an arrogance and aloofness about them. He was so welcoming, sweet and passionate. ?" 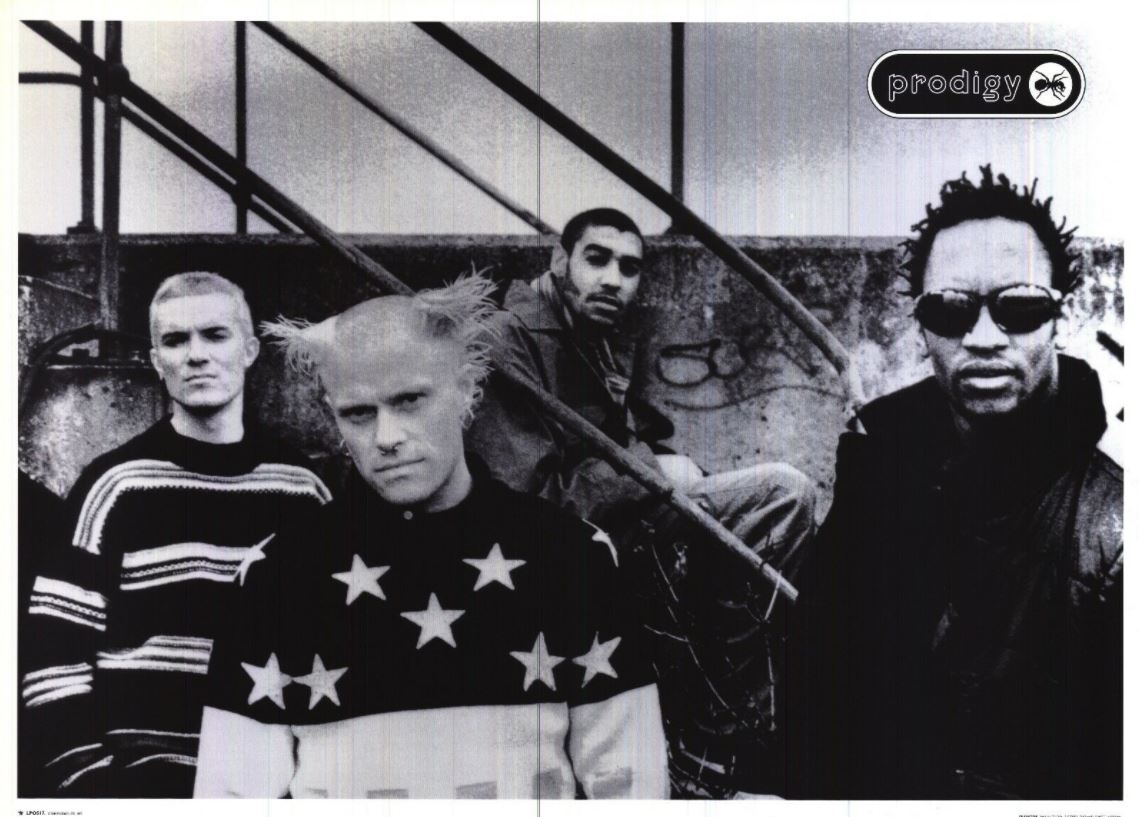 Keith's body was discovered at around 8am this morning after police and paramedics were called to his Essex home.

Officers remain outside the rural cottage this morning but his death is not being treated as suspicious.

Famed for his devil-horns haircut and intense stage performances – the iconic 90s musician was performing just last month in New Zealand on a world tour set to run until May.

The Essex boy, who once dated Gail Porter, was the face of the rave band and took centre stage on their best-known hit Firestarter, the single which launched him as an icon.

His Prodigy bandmates described him as a "true pioneer, innovator and legend”.

In a statement, they said: "It is with deepest shock and sadness that we can confirm the death of our brother and best friend Keith Flint.

"A true pioneer, innovator and legend. He will be forever missed.

"We thank you for respecting the privacy of all concerned at this time."