Prince Harry and Meghan Markle have got the world talking following the release of the first three episodes of their docuseries Harry & Meghan.

On Saturday, Netflix released a new trailer for the series, in which Harry and Meghan speak about their 2018 wedding. In the 44-second clip, Meghan reflects on what the couple chose to have as their first dance, as well as attempting to sing along to the classic. As ever, the footage was interspersed with still images, and the photos from the reception had never been seen.

Plenty of shots were featured in the trailer, which is above, showing them dancing, and even attempting a very daring move!

The photos even showed Sir Elton John at the uplifting event, and his reaction to the bride and groom has to be seen to be believed.

“It was a whirlwind,” the Duchess of Sussex exclaimed as the trailer drew to a close. 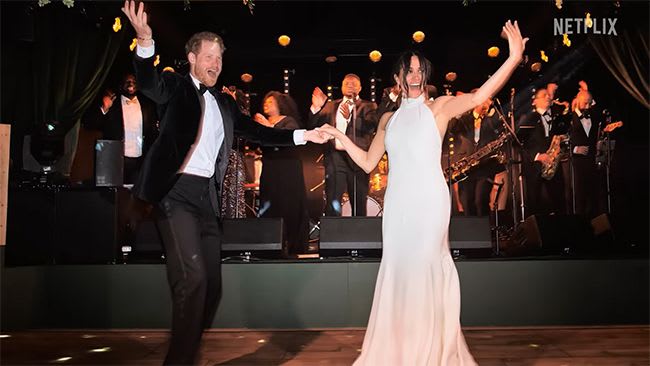 Harry and Meghan took to the dancefloor

The couple’s six-part documentary shares an incredibly candid insight into their high-profile love story, their rocky relationship with the media, and everything in between.

DISCOVER: Prince Harry and Meghan’s royal titles – what can and can’t happen

ABOUT: Meghan Markle’s father’s family: who are they and who features in the documentary?

The series has also seen them speaking about their relationship with the royals, with Meghan sharing details about her first Christmas at Sandringham.

“I remember so vividly the first Christmas at Sandringham, calling my mom, and she’s like ‘How’s it going?’ and I said ‘Oh my gosh it’s amazing’,” she explained.

Plenty of stars were at the high-profile event

“It’s just like a big family like I always wanted. And there was just this constant movement and energy and fun.”

INSIDE: The exclusive Soho House where Prince Harry and Duchess Meghan met

The Duchess even shared detail of the royals’ Christmas dinner, saying: “And at dinner I was sat next to H’s grandfather and I just thought it was so wonderful and I was like ‘Oh we chatted and it was so great and I talked about this and talked about this’.