Piers Morgan is back in the interviewer chair tomorrow night as the fourth episode of his entertainment show airs on ITV.

Viewers will tune in to see him sit down with Harry Redknapp and discuss his life and career as one of the mot respected and experienced football managers having started his managerial career in 1983 at Bournemouth, and also included a successful stint at the likes of West Ham United, Portsmouth and arguably his best years at Tottenham Hotspur.

Ahead of that, ITV chat show Lorraine gave fans a sneak peek from the episode earlier today and Harry was seen speaking about his marriage to wife Sandra, as well as his intolerance of people in general.

The clip began with Harry explaining: “I’m totally besotted with her [Sandra], and I am, I’m not just saying it, I am.

“When I leave her tonight, we’re going to go and have a bit of food, I just love being with her. We go on holiday, just on our own, the two of us. We just love each other’s company.”

Harry and Sandra have been married for 52 years after first meeting back when they were just 17-years-old.

Piers continued and then asked: “And do you think Harry, if.. “ But was cut off by Harry explaining: “And she knows, I can, I do get bored with people quite quickly.”

The audience in the studio then erupted in laughter and the camera panned to Sandra who was sitting on the side giggling too.

“No, no,” Harry tried to clarify and Piers jokingly replied: “Are you trying to tell me something Harry?”

The I’m A Celebrity… Get Me Out of Here! 2018 winner was also probed about his son, Jamie Redknapp and daughter-in-law Louise Redknapp’s decision to end their marriage. 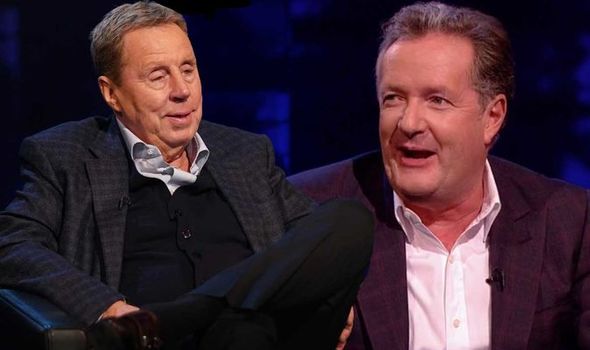 “Everything that happens in [your] family gets splashed across the papers. And recently your son Jamie has been through the tabloid ringer a bit by splitting from his wife Louise, what did you think about their split?” the journalist asked.

“No, I was choked,” Harry replied. “Absolutely could never ever see that happening. I thought they were going to be married forever.

“They weren’t a showbiz marriage, if you like,” Harry continued. “Lou just didn’t want to be anywhere without Jamie, they were very, very down to earth the pair of them. Me and Sandra were completely shocked when it happened.”

“Do you think there is any hope they could get back together?” Piers wondered and his guest responded: “I don’t know, I mean only they know that Piers, but they were a great couple together that’s for sure.”

Last week, Piers was joined by comedian Michael Barrymore and he opened up about his relationship with the late Princess Diana as well as speaking about his issues with substance addiction. 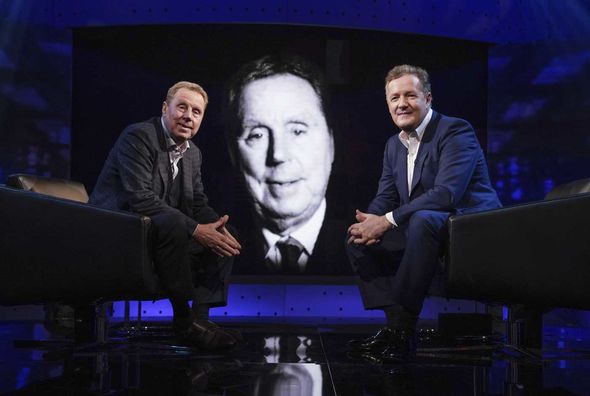 Alongside Harry and Michael, Piers is going to chat to his onscreen rival Lord Alan Sugar.

‘Shuggsy’, as the Good Morning Britain presenter fondly refers to him as, will open up to his frenemy about his life and career in upcoming weeks.

Speaking about finally securing Lord Sugar for the show, Piers said: “I’ve tried for ten years to get Lord Sugar to do Life Stories but he’s always bottled it. Now we’re going to finally get it on, and I predict fireworks.”

He will be seen on screen next Saturday night, where Piers will quiz him on his recent financial and legal troubles as well as the nervous breakdown he experienced while fighting a libel case.