Our Yorkshire Farm: Cow steals a sock from the kitchen

In tonight’s episode of Our Yorkshire Farm, Amanda and Clive Owen had the challenge of moving their sheep from the Yorkshire Dale fields and back closer to Ravenseat ahead of tupping season. Clive was driving a quad bike while Amanda led the sheepdogs to move the animals, but due to the rough terrain, Clive got the quad bike stuck and Amanda was not happy when she had to go and rescue him – especially since she was the one to push the vehicle out of the muddy bog.

Ralf Little told Channel 5 viewers how the quad bike was “sunk up to its axis”.

Amanda noticed Clive “appeared to be on foot” and how that was “usually not a good sign”.

“Out here, being on a quad bike is a hindrance,” she added. “I don’t know whether its run out of petrol or bogged.”

Because Clive was unable to herd the sheep with a quad bike, Amanda had to resort to old-fashioned methods. 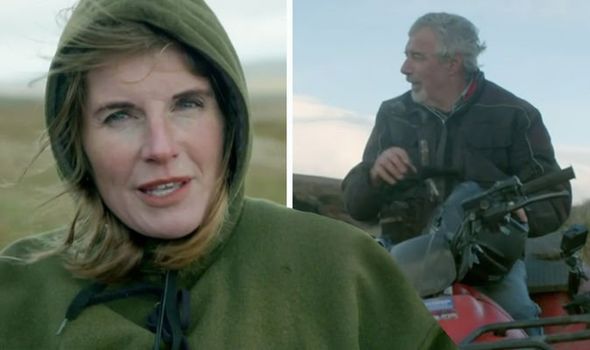 “Whistling your dog in this environment is entirely different,” the Shepherdess said.

“You usually see a dog working in an enclosed space.

“Here, you’re working over hundreds of acres and hundreds of natural obstacles – Gail force winds, freezing conditions – it really is the purest form of shepherding, back to basics.”

When Clive finally joined Amanda, she asked her husband: “What have you done?”

And the farmer explained how he had got the quad bike stuck and added: “She’s bogged big time. 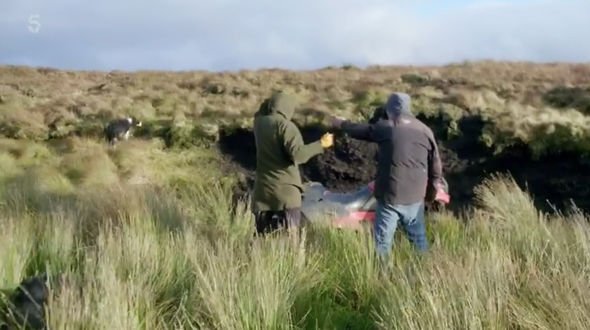 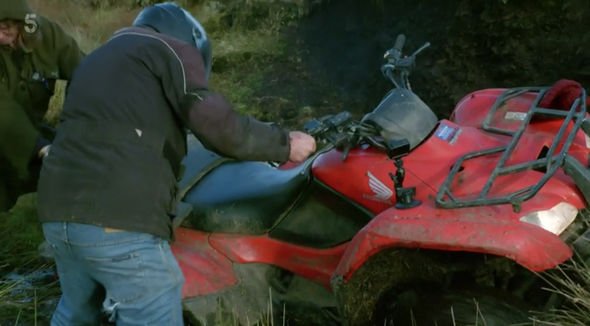 “I think I can find the place [I abandoned it], I just need you to come and give me a lift.”

“And get covered in the mud?” Amanda remarked. “How far away did you do it? About as far away as possible!”

Clive and Amanda set off on foot and he added: “I think it’s out here somewhere – we’ll spot it.”

They eventually stumbled upon it and Amanda commented: “I must say, [you’ve done a] cracking job!” 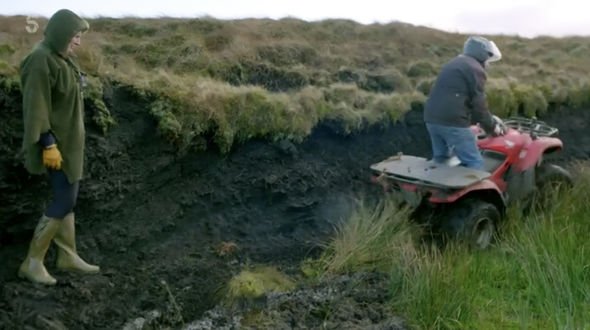 “I was heading there but I got grabbed here,” Clive explained. “One of us needs to stand behind it and push it.”

And Amanda realised this would be her standing in the muddy bog, she then told her husband to put his helmet on.

“Safety reasons and you can’t hear me calling you all the [names under the sun],” she joked.

After a few attempts, they managed to get the quad bike out of the bog and they headed back to the farm.

Together, they had 850 ewes on the land and they needed to sort them all before they could be introduced and mate with one another.

Clive did this by separating the families and colour coding them with the hope every ewe would be pregnant for next spring.

Our Yorkshire Farm airs Tuesdays at 9pm on Channel 5.