An advert deemed ‘offensive’ and ‘disgraceful’ has received calls to be taken down and more than 200 complaints, with comedian Jenny Eclair among one of the most vocal critics of the commercial.

Earlier this month, paints company Crown Paints shared a new ad on its social media channels, which tells the story of two characters – Hannah and Dave – through the medium of song.

A group of singers decked out in various shades of yellow sing about the couple’s relationship journey, including how they met at an ‘illegal rave’ and moved in together after dating for a while.

According to the song, while Dave wanted kids and Hannah previously didn’t, she then changed her mind ‘throwing herself’ at her partner in an effort to conceive.

‘And now baby’s coming and they don’t know what it is. Hannah’s hoping for a girl, Dave’s just hoping that it’s his,’ the tune continues, before celebrating that the spare room is no longer grey ‘‘cause there’s a baby on the way’.

Jenny is one of a number of people who have taken offence at the advert, with several expressing their anger over the lyric about Dave not knowing if the baby is his, insinuating that he might suspect Hannah has slept with other people. 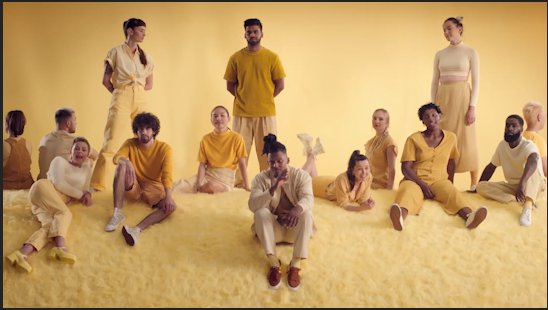 Others complained about the notion that ‘woman who don’t want children are constantly told they will change their minds’, while Jenny argued that the ad ‘set up a scenario that implies a woman has possibly conned a man into fatherhood’.

In a series of tweets, former I’m A Celebrity…Get Me Out Of Here! star Jenny fumed about the advert, writing: ‘Hey @crownpaints get that offensive baby ad off air – what were you thinking !!!? What on earth possessed you?’