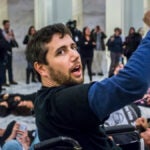 The “West Wing” actor added, with a good-natured laugh, “Which is the reason he’s not here today, because he doesn’t have time to promote a movie when there are health care fights to be had.”

Whitford was joined by the documentary’s producer Amanda Roddy and director Nicholas Bruckman in a conversation moderated by TheWrap’s editor-in-chief Sharon Waxman. The topic centered on the still-young life of Barkan (he’s only 37) and the valiant efforts he’s made to be heard.

Barkan, in fact, was already losing his voice to ALS when director Bruckman first met him three years ago. “We knew that the core of the film would we watching his voice decrease as he gained this national platform,” the filmmaker explained. “And the incredible poignant irony of him losing his voice and then giving it to so many others.” 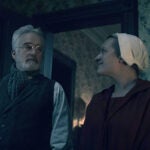 Producer Roddy described not knowing where the film would lead, after Barkan agreed to allow the camera crew to document his cross-country road trip highlighting healthcare in 2018. But the story didn’t stop once the roadtrip was finished. “He just kept on going and we had to keep on going. We set out to make one film but then had to learn and adapt from our subject and evolve with him as he continued to create this movement.”

Barkan gained prominence in 2017 when he engaged Senator Jeff Flake in a conversation while aboard a plane. And Whitford insisted that it is Barkan’s openness to conversation, with friends and foes alike, that makes him such an admirable and much-needed figure in our society.

“It’s very easy to be cynical about politics and to be frustrated and we should be, but politics is the way we create our moral vision,” Whitford said. “Culture is fantastic, but ‘Will & Grace’ won’t help you if you have a pre-existing condition. We don’t do the follow-though politically think people like Ady understand that. You have to pass a bill in order to get home health care workers and community health care workers to improve the lives of people. You can’t just scream about how much you hate the people who frustrate you.”

To watch the whole conversation, click the video (above). “Not Going Quietly” is available on streaming services.