In honor of Daniel Craig’s farewell as James Bond, “No Time to Die” director Cary Joji Fukunaga made a romantic adventure to wrap up 007’s emotionally-charged personal journey, and linked it to the franchise’s two previous tragic love stories: “Casino Royale” and “On Her Majesty’s Secret Service.” For cinematography, Fukunaga tapped Oscar-winning DP Linus Sandgren (“La La Land”), who shot a combination of 35mm film and 65mm large-format film (including IMAX 65mm) — a franchise first.

What they achieved on “No Time to Die” was an “enhanced reality,” with greater richness and scope in a grand, classical style, according to Sandgren, who joins “You Only Live Twice’s” three-time Oscar-winning legend, Freddie Young (“Lawrence of Arabia,” “Doctor Zhivago,” and “Ryan’s Daughter”), as the only other DP who comes to Bond with such Academy distinction. “It was very important for Cary that we take care of that part of Bond that embraces adventure, escapism, and romantic action,” he said. “And that has humor and fun gadgets. It’s larger than life.

“But Cary also wanted to really pay attention to Daniel’s version of Bond, which is more raw and layered, and has the ability to be emotionally softer,” continued the Swedish Sandgren. “I very much agreed to that. We wanted to give the audience that without being unrealistic. And a large part of Cary’s vision was also the actual stunts…that, ideally, could be captured in camera and [done] for real, which, for Bond, has always been a big thing.” 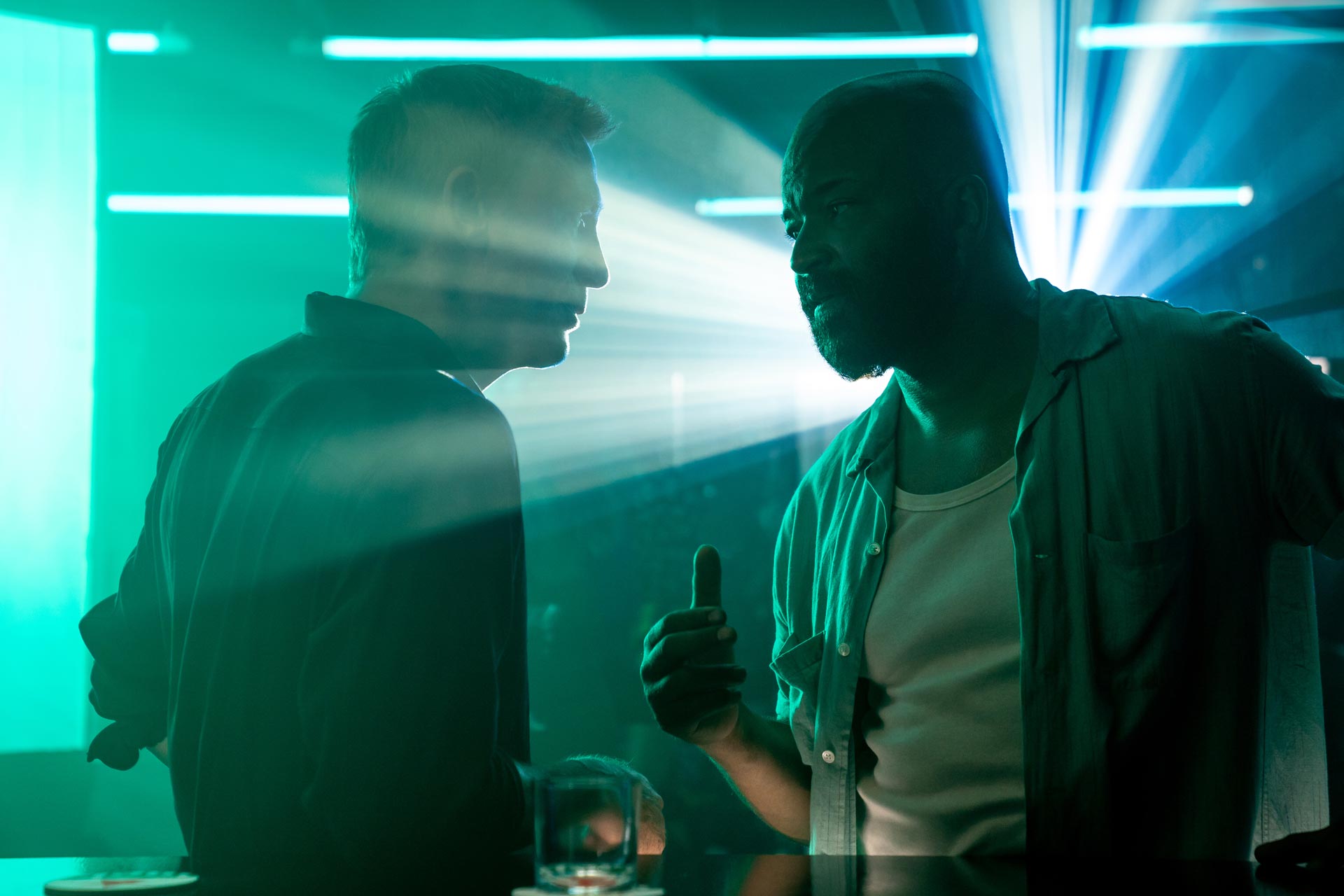 “No Time to Die” (Daniel Craig and Jeffrey Wright).

It was this combination of intimate character drama and brutal action that defined the visual strategy of “No Time to Die.” And Fukunaga’s penchant for hand-held, guerrilla style shooting blended perfectly with Sandgren’s preference for long takes and intricate blocking (such as Bond battling henchmen while climbing stairs in a single shot late in the movie). But all the action had to be tied emotionally to Bond, and the color palette was dictated by locations in Norway, Italy, Jamaica, and London, or the Pinewood sets created for Cuba and baddie Safin’s (Rami Malek) exotic, brutalistic-looking underground lair.

“We both thought that the best film format for Bond was anamorphic 35mm,” Sandgren said. “We love the colors that film brings and the richness to the images, but also, in anamorphic, it romanticizes. It’s the perfect match for a Bond movie. So that was our base [using the Panaflex Millennium XL2 with Panavision G Series Anamorphic Primes for beautiful flares and high contrast]. But throughout production, we’d build a set on the 007 Stage in Pinewood that was 300 feet long and Cary still wanted to extend it. He wanted it even taller, longer, a little more explosive.

“So part of that was maximizing the image with IMAX [using the IMAX MSM 9802 with Hasselblad lenses and custom high-speed Panavision lenses], which we know is stunning and sharp and colorful. The benefit of it basically is that you have your 2.40 aspect ratio, but then you mix. And we mixed in such a way that a full scene would be in IMAX or not [alternating mostly with the Panavision Panaflex System 65 Studio with Panavision Sphero 65 lenses]. And then when you see it in an IMAX theater, you get your [widescreen] field of view, but then the IMAX adds image above and below and just engulfs you so you’re more immersed.” 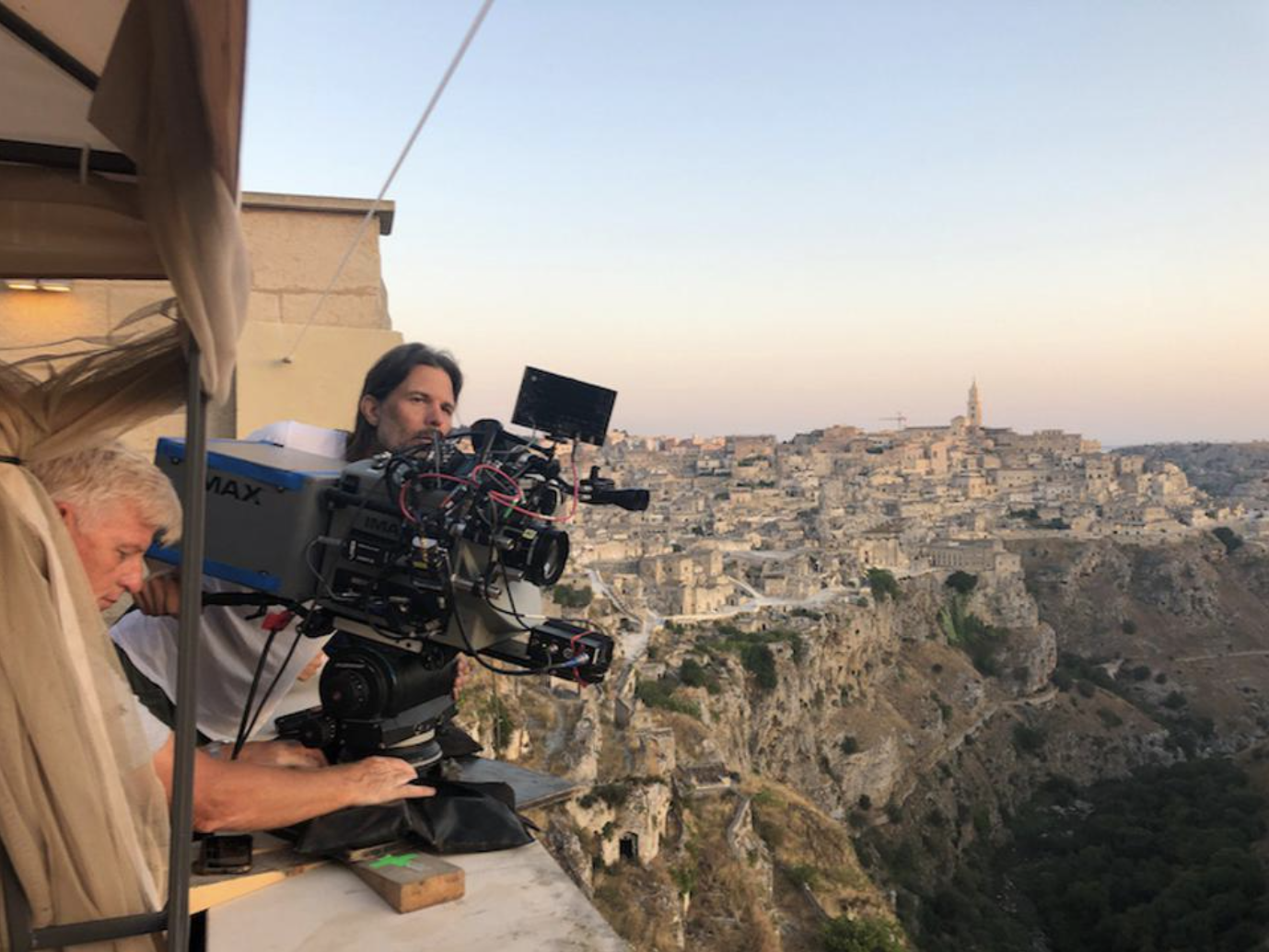 But the heavy-weight IMAX camera, despite special modifications for Christopher Nolan’s “Tenet” and “Dunkirk,” was not made for heavy-action vehicle stunts or the demands of frozen temperatures, in the air, on cables, and underwater. “When you come to these action sequences, we wanted it to be brutal and hard and unpredictable,” said Sandgren. “And therefore we wanted that to feel hand-held.

“However, it was daunting at first to travel fast through these [narrow alleys in Matera, Italy]. You need to test and we put them on motorcycles and hand-held and it turned out [to be] very easy to use. Sometimes it could be intricate designs that help. For instance, we were thinking there’s a part of that action sequence in Matera that actually went through a building and we kept fighting how to get through to the other side for a moment. We thought of building that on stage and having those cameras supported from above with a cable so it would be easier to operate hand-held. Eventually we just shot it hand-held.” 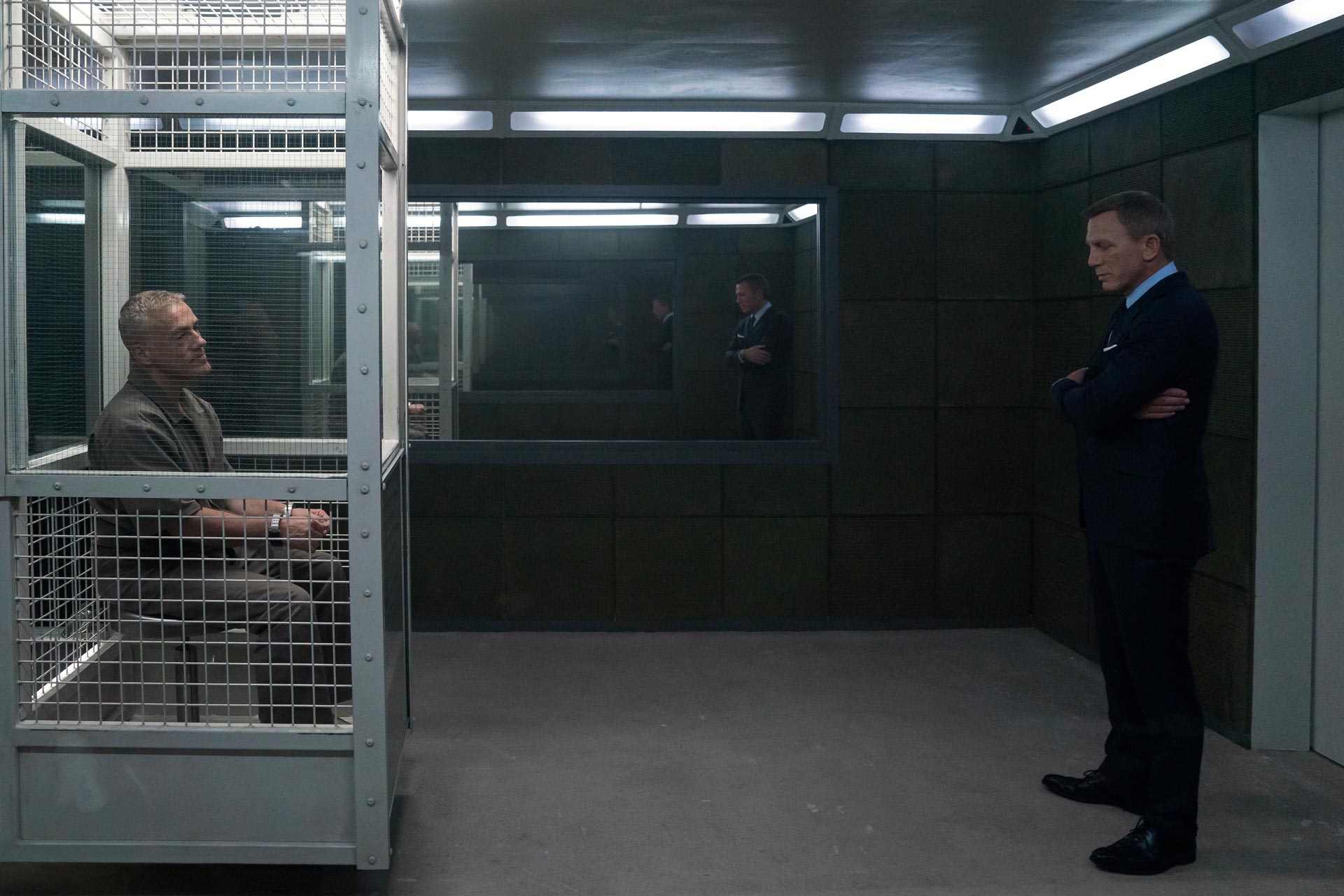 “No Time to Die” (Christoph Waltz and Daniel Craig).

Yet a Bond shoot functions like no other action franchise. It’s a wild brand of organized chaos where scripts are always in a state of flux along with location scouting and set building. But this Bond film was the most trouble-plagued in franchise history. After coming aboard with Fukunaga (who replaced director Danny Boyle and rewrote from scratch with Bond scribes Neil Purvis and Robert Wade and Phoebe Waller-Bridge), Sandgren had to adjust to the further complication of Craig injuring his ankle early in Jamaica.

The Bond star was out for several weeks, which meant that scenes were pushed up, and others were shot around him, including the Cuba fight sequence during a Spectre party, in which Bond teams up with badass CIA agent Paloma (played by the delightful Ana de Armas). This was originally designed as a single take, but that idea got scrapped for more of a puzzle piece, with 2nd unit sometimes shot ahead of first unit until Craig returned. 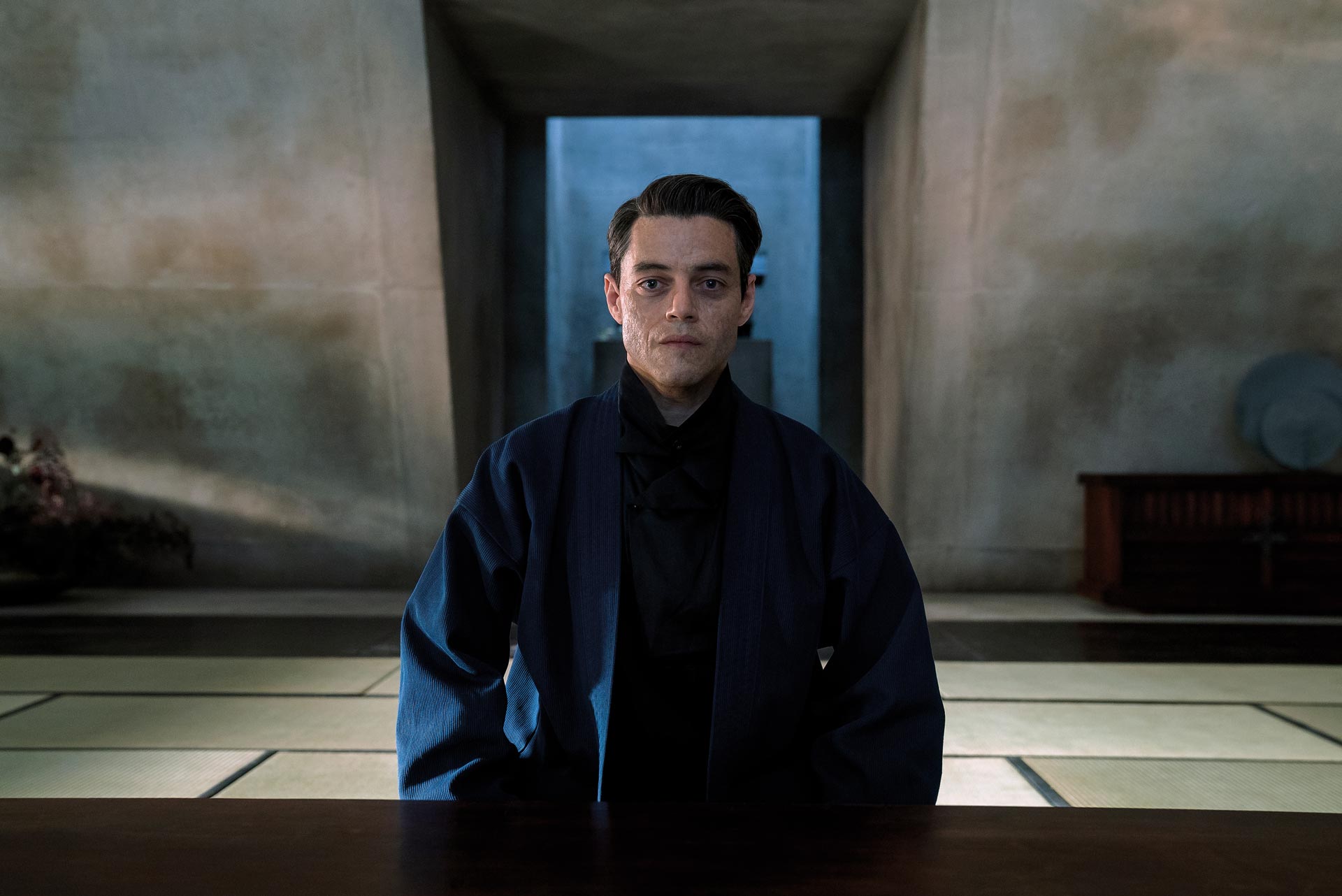 “What was also interesting with that one was Cary wanted it to take place in Cuba, and there were thoughts of having that scene in the streets of Santiago de Cuba, but it would’ve been impossible because it took six weeks to shoot that,” added Sandgren. “So the whole thing was built at Pinewood, and it was all designed from scratch, and we lit it like what you would do in the streets. But it was much larger. Lighting wise, it was like an exotic night in Cuba that also connects to the scene in the ocean, and we played with doing it all in twilight and then dusk, shooting over multiple nights to get that mood, which was important. It’s all shot for real with explosions in that light.”

For Sandgren, though, it was important not to get too lost in the spectacle that you neglected to focus on Craig’s battle-hardened face and striking blue eyes. “The script is so emotional and he’s such a great dramatic actor,” he said. “It’s important to disregard that you’re moving the camera around, that you need to do explosive shots, and move really fast. It’s not about that. It’s about the ability to be intimate and sensitive. Sometimes you want to be really close and still. And that’s what it was, only intensified in IMAX.”