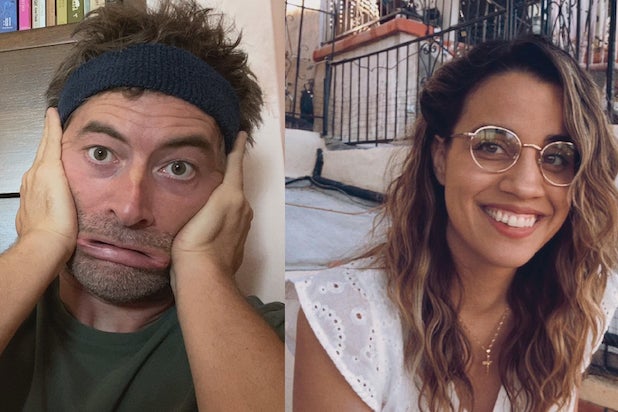 “Parks and Rec” star Morales made her directorial debut on “Language Lessons,” which made its premiere at the Berlin International Film Festival before snagging an audience award for Morales at this year’s SXSW Film Festival. Shout! plans to release the film across all platforms, beginning with a theatrical release later this year.

Duplass and Morales also co-wrote the screenplay, which is about a man whose husband surprises him with weekly Spanish lessons. When tragedy strikes in his life, his Spanish teacher becomes a lifeline he didn’t know he needed, leading him to develop an unexpected and complicated emotional bond with her.

“Language Lessons,” which earned strong reviews out of Berlin, is described as bittersweet, honest and at times darkly funny in how it explores platonic love and the complications of a long-distance relationship. The film was shot in secret during the pandemic with skeleton crews in Los Angeles and Costa Rica.

The film is a production of Duplass Brothers Productions and was produced by Mel Eslyn. Natalie Morales, Mark Duplass and Jay Duplass are also executive producers, and the film features original music by Gaby Moreno.

“Shout! has held a special place in my heart, way back since their release of my first show, ‘The Middleman.’ What can I say? They’ve always had a good eye, and they’ve always been supportive of the little guy. I’m thrilled that they’re the ones who will bring this movie about connection to larger audiences in a time where I think we could all use it,” Morales said.

“We’ve been so humbled by the response to our little film, but it was Shout!’s unwavering passion and innovative strategy that won us over in the end,” Mark Duplass added.