And explains why it’s so hard to do 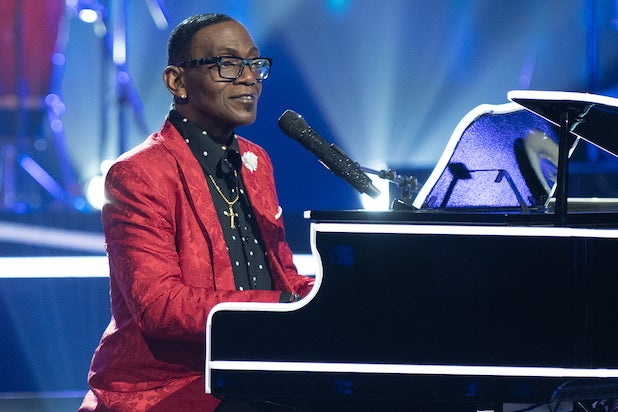 Fox’s reboot of “Name That Tune” premieres Wednesday, bringing the classic game show with a very simple premise — it’s right there in the title — back to broadcast television. But as anyone who has ever had an answer stuck on the tip of their tongue can attest, naming that tune is easier said than done.

“You’ll see it when you’re watching the show, people are singing the lyrics in their own head to themselves, hoping the the title comes out. But the tough part about the show is you’ve got to name the title correctly, exactly,” the rebooted “Name That Tune’s” band leader, Randy Jackson, told TheWrap. “It can’t be a roundabout, adding a word here. It’s got to be the exact title or it’s wrong.”

Jackson says things get even tougher in the iconic “Bid-a-Note” final round, where contestants are given clues to guide their guess, along with following the notes.

“That’s why you see some people saying, ‘Oh, I think I know what this is, I can name this in one note.’ And I play the note and they name it. And you’re like, how did you figure that out? They figured out from the clue the only answer it could possibly be to them. And either they get it right or dead wrong. So it’s taking a huge leap of faith. This game is a lot harder than it seems. People will be at home watching the show yelling at the screen, ‘How do you not know!’ And I did that as a kid. But it’s hard.”

So how do you win it then?

“You want the most memorable part of the song played, to jog you to what the title might be,” Jackson, who is in charge of playing that most memorable part for you. “And to prepare for that, you’ve got to go through your catalog in your mind, in your iTunes, in your Spotify playlist, whatever you’re doing. Really identify exact titles. It’s hard to do. People today will listen to stuff, ‘Oh, I love that song, what’s it called?’ ‘I don’t know.’ ‘What!’ Your mind plays tricks on you like that.”

Hosted by Jane Krakowski, Fox’s “Name That Tune” reboot matches the format of the original series, testing contestants’ music knowledge as they battle it out in an assortment of challenging musical games for cash and prizes.

Per Fox, each one-hour episode of the show — which was shot over a two-week period in Sydney, Australia following a two-week quarantine so the network could incorporate a large studio audience under COVID-safety guidelines — is comprised of two stand-alone half-hour contests, pitting two players against each other as they race against the clock to test their knowledge of songs, performed by the live band. Each contest features a rotating variety of games from the original format, before the iconic Bid-a-Note round. The player with the most money at the end of Bid-a-Note wins the game and takes his or her bank into the Golden Medley bonus round, for a chance to win additional cash and potentially the $100,000 grand prize.

Again, all of this might sound easier than it is, as “Name That Tune” executive producer Paul Franklin agrees with Jackson on the complexities of memory recall in that pivotal moment.

“It’s the worst feeling, because it’s like suddenly they’re playing the beginning of ‘Lose Yourself’ and you’re like ‘Is it called “One Shot”?? Why don’t I know what it is!’” Franklin told TheWrap. “Our contestants are better than that, but if you’re sitting at home and you’re like ‘Ah, I know that song!’ That’s why the show works and why it’s worked for so many years. It’s for contestants to play, but more than that, it’s for people at home to play.”

Franklin says the part that trips people up is Jackson and the band, of course, can’t sing the title when they come to it in the lyrics.

“So they’ll get to that point and people are hearing all the other lyrics, you’ll hear, ‘You’ve only got one shot,’ and you start to try to figure it out,” he said. “And a lot of people hear the music and they press the buzzer and you see them and their eyes are rolling over and over and they’re trying to fast-forward in their head to get to the chorus so they can remember what it is. You see that a lot: they hit it, they stop and they continue in their heads where the band was. That’s the common thing, which is fun to watch.”

And readers can watch that when “Name That Tune” premieres Wednesday at 9/8c on Fox.