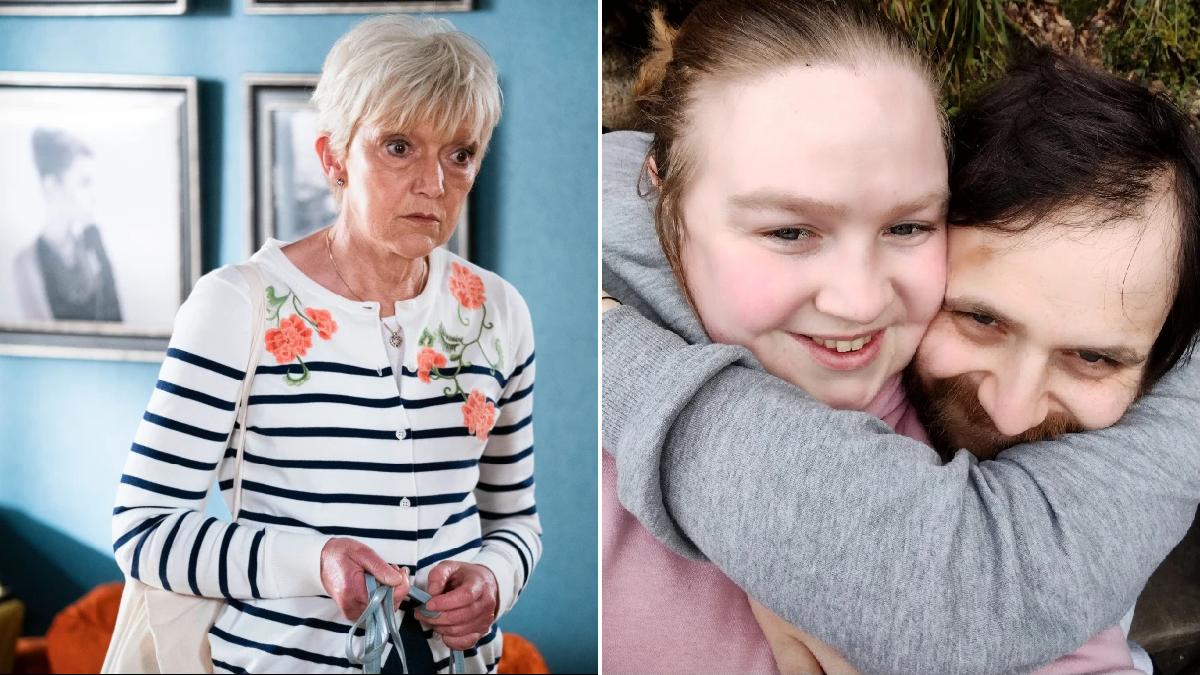 Erratic nights out with intense and over domination of social groups; dangerous and impulsive decisions involving strangers, finances and gestures; terror of silences; self hatred and suicide ideation.

It’s not the thing that most people would willingly sign up for in a relationship and yet from the day I met the man I love, I was prepared for these things to be part and parcel of life.

My now-husband Duncan started displaying characteristics of bi-polar disorder long before I met him at the age of 19.

It’s a condition that remains an enigma to many; those who can’t differentiate between excitable behaviour and a manic episode. And those who assume that sudden plunges into deep despair are a generalised form of depression.

This is absolutely understandable. Bi-polar is a condition that can be easily misunderstood and it is one that, while it is being more talked about, lacks awareness and education.

One such display of the condition comes from the EastEnders character of Jean Slater, played exceptionally by Gillian Wright.

I see so many familiarities in Jean’s behaviour and Duncan’s that I am engrossed and find our lives represented.

Jean is a character often seen as kooky and out there, but can behave more and more excitably and, as many would see it, strangely.

Interspersed between impulsive behaviour such as launching herself prematurely into a sexual relationship with someone she barely knows, hiring and jumping on bouncy castles she has hired on a whim and heading off on a stag do with strangers, we see Jean become snappy and declare dramatically that those she loves are dead to her.

These are the kind of contradictions that those who experience bi-polar episodes and those who witness them deal with.

During manic episodes, I have seen Duncan overwhelm conversations, speak quickly and make inappropriate comments and jokes in the wrong environment.

In desperation to be liked, he has involved himself in buying everyone’s drinks, using humour overtly and making sudden gestures such as lending people sums of money he can’t afford and inviting people to stay for months.

Manic episodes can influence work too; witnessing Duncan working from the early hours to past midnight without any kind of respite or exhaustion is an intense watch.

In the same way that Duncan’s manic episodes come and go, so do the arguably more harrowing depressive episodes.

I have never been more frantic than when Duncan disappears for hours, while in a mood where he won’t talk and is clearly consumed by self hatred.

Like Jean, he can turn at a moment’s notice, saying nasty things and behaving in an argumentative manner both in person and through personal social media and work emails. He then becomes tired and frantic when he recalls what he has done; plunging himself into a deeper crisis.

As Jean has, the man I love has attempted suicide on more than one occasion. Before his diagnosis, which was very recent, it was believed that he was depressed as a result of incidents in his life.

Those around him, including myself, made assumptions and often saw the changing moods as dramatic and uncalled for.

Family members have wrongly claimed that he has been drunk when in actual fact, no alcohol has passed his lips.

Often manic and depressive episodes can come hand in hand; from childhood, Duncan has been triggered by conflict, often inducing them himself.

Is Gillian acting over the top? Yes. Is she portraying it incorrectly? Absolutely not

He has been called a drama queen and told simply he needs to calm down when he has erratically argued sometimes without sense.

Duncan was only diagnosed last year and it made much more sense; we saw such familiarity in the symptoms and just knowing it was a condition and not personality flaws helped regain some balance.

Medication has also been a factor and this has been represented by Jean. We have seen her stop taking her pills at some points, which has led to threats of relapse.

Everyone close to Jean knows she has bi-polar disorder and, through frustrations, we have seen it handled from a place of love but not necessarily the right kind of approach.

Losing tempers and rolling eyes, as Stacey has done, is a common and understandable reaction – but it is one which can be a mistake.

Remembering that things that are said are not personal, while also striking that balance of not allowing the condition to be a get out of jail free card, is really hard.

But in the show, we are seeing that the behaviour shown by ‘quirky’ Jean is just being accepted as ‘well, Jean will be Jean.’

But beyond her funny misunderstandings of situations and her sausage surprise, the way she acts becomes more and more concerning at times.

Her relationship with Harvey has been exciting and out of the blue for them both, with Harvey using the fun as a way to distract himself from stresses in his own life.

He has been warned by Stacey, who has adopted a dangerous approach of asking him to finish with her, that Jean is in the midst of a serious manic episode.

The dismissal of the condition for the fear of having to deal with it is something that Harvey may soon see the repercussions of.

Duncan can be perceived as a blight on social situations and someone whose frustrations and sudden temper swings are absolutely unacceptable and driven by tantrums.

And Jean is being assessed by others in similar ways. Those not directly involved with Jean have raised their eyebrows and laughed while viewers watching the show have described the character as ‘annoying’ and declared that Gillian is playing it way over the top.

Finding someone annoying when they are in a manic episode is a common response, although not altogether fair in my opinion.

Someone with a broken leg or a disease would not be considered irritating when needing support, and mental health conditions such as bi-polar disorder shouldn’t be either.

Is Gillian acting over the top? Yes. Is she portraying it incorrectly? Absolutely not because the episodes of someone with bi-polar ARE over the top.

As for some sighing that EastEnders have done the story before; this is the reality.

Coming down from episodes and being prescribed medication is not a cure and doesn’t remove the condition from someone’s life. Jean’s story isn’t being copied or repeated, but is a continuation of what she has.

It is the same with Duncan; for the most part, bi-polar disorder does not define him or impact his day to day life. But when that intensity strikes, it seriously does.

Since his diagnosis, Duncan has been much more levelled. He has taken part in therapies and discussions and he is taking levelling medication, which is not a cure or a so-called ‘happy pill’, but which works to try and ease the peak of the intensities of both manic and depressive behaviours.

He has managed to beat an eating disorder he has suffered for over half of his life because the acknowledgement of what has been going on since childhood has provided a vindication of some sort.

But do I think that we will never be there again? Do I expect that he won’t dominate a party or make those jokes that aren’t the right place or time?

Do I reckon he will never need a big hug and a pep talk and that I will never experience that fear of his state of mind?

No. I am not unrealistic.

Jean is a character who has been visited by the bi-polar demons on and off for years but for the most part, she is a character of love, laughter and fun.

With her condition recognised, these relapses are much less common than they would be if the illness is unknown and unaddressed.

And that’s why the future feels bright for myself and Duncan. My love for him has never changed and I will support him whatever but our lives have changed in a positive way since diagnosis.

Jean’s portrayal in EastEnders has given us and those around us with a much deeper understanding of what bi-polar disorder is and how it alters behaviours and moods.

Jean is not annoying, or repetitive to the point of boring. She isn’t played badly by the wonderful Gillian.

She is the representation we need to make sense of a condition that needs much more discussion and support.