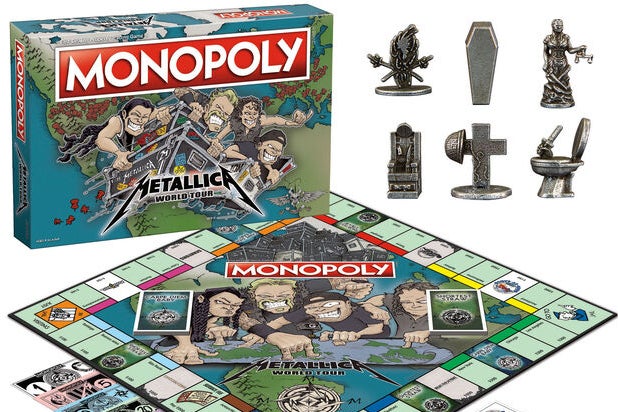 There hasn’t been much to celebrate in 2020, but leave it to one of the world’s biggest bands to find something to cheer about. Metallica has re-teamed with Monopoly for an all-new “World Tour” edition of the timeless board game, nine years after their first partnership in 2011.

So what exactly is Metallica celebrating that’s worthy of a new game? For starters: their time on the road and their many accolades, which includes their record-breaking 2013 tour that made them the only band to ever perform on all seven continents. That milestone is reflected in this new edition of Monopoly, with collectible tokens representing iconic destinations in Asia, Australia, Antartica and beyond. But it’s also reflected in the game as a whole.

Metallica’s newest Monopoly game includes tokens that allow you to purchase properties like arenas and stadiums. Fans can also choose from an assortment of Metallica-inspired player tokens — including Lady Justice, the Death Magnetic coffin, the Ride the Lightning electric chair, the Master of Puppets cross, the Metal Up Your Ass toilet and the Scary Guy. And as a reward for buying all that property, you get everything you’d collect if you were able to be at a concert in 2020: guitar picks, drumsticks and snake pit passes.

The new game is a smart way to fill the concert-sized hole in your life, especially if you add in some sweet Metallica music along with your gameplay. Plus, with travel cautions and slimmed-down family gatherings, what else are we going to do this holiday season? Monopoly is pretty much the ideal family game for all ages — not to mention, one that you can get really competitive with.

And for those fans who loved the first edition of Metallica Monopoly and are eagerly awaiting the chance to collect this second one? You just found the newest thing to add to your holiday wish list.