Can a divorced, 50-something woman with a penchant for wrap dresses and bad decisions be the center of her own story? The question sounds absurd, until you consider just how few films have focused on such a character.

But that’s just what Sebastián Lelio’s slice-of-life “Gloria Bell” does.

A remake of the Chilean director’s award-winning 2014 Spanish-language film “Gloria,” the movie is a radical proposition for American audiences accustomed to seeing characters like Gloria relegated to the sidelines.

Set in a hazily lit Los Angeles, the new version stars Julianne Moore as a funny, irrepressibly optimistic and deeply flawed divorcée who in the course of the film does her best at navigating the day-to-day drama of middle age on her own. She lives in a modest apartment, works a boring job in insurance, sings out loud to Bonnie Tyler’s “Total Eclipse of the Heart” in her beat-up car and goes out dancing by herself.

Orbiting around her are her adult children, played by Michael Cera and Caren Pistorius, her friends (Rita Wilson and Alanna Ubach), her mother (Holland Taylor) and her disaster of a boyfriend (John Turturro), whom she meets out one night at her go-to disco.

Lelio, whose 2017 identity study “A Fantastic Woman” won his country its first foreign-language Oscar, said he wanted to revisit Gloria now because of this particular moment in American culture, when the view of women is shifting with the help of #MeToo in Hollywood and beyond.

“The story of a woman in America today, claiming her rights to be seen, felt urgent again,” he said in a phone interview, adding later, “There’s a political dimension now, and that’s part of the excitement of it.”

He explained that there was something moving about turning the camera on a character who in most films would be “the mother, or the auntie, or the friend. Normally, the camera goes with the rest of the characters, but here it stays with her.”

Of course, plenty of films dealing with the trials and joys of middle age have starred, and have often been made by, women. The director Nicole Holofcener achieved critical success with movies like “Please Give” (starring Catherine Keener) and “Enough Said” (Julia Louis-Dreyfus). And Nancy Meyers became a household name with her ebullient romantic comedies starring Meryl Streep and Diane Keaton.

“Gloria Bell” is an exaltation of Gloria but also an examination, Lelio said. “It is quite intense to show her from every angle going through the entire emotional spectrum, to really get to know this woman.”

The movie has already drawn praise for Moore’s performance. “The genius of Moore,” Anthony Lane wrote in The New Yorker, “is how plausibly, and how patiently, she fills the spaces of ordinary living.”

It’s Gloria’s exceptional ordinariness that drew Moore as well. “There’s more drama in a single day of a person’s life than all these manufactured versions with explosions and car chases. When do you ever see a car chase?” she said. “The drama that I’m interested in is human drama and relationship drama.” 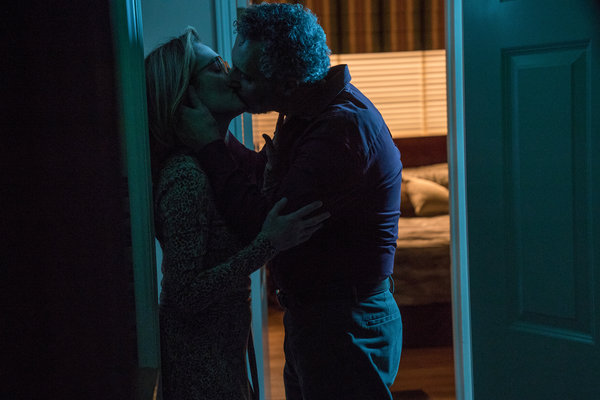 For Moore, 58, it was also crucial to show that women don’t become less interesting or less desirable as they age. “It’s important to see women make mistakes at different stages. Just because you get older, you don’t know everything and it’s not like you stop living.”

She added, “I think in the weird narration of our world of entertainment, there are these central figures who are in their 20s and 30s.” That focus misses a lot of human experience, and Lelio took pains to show the full spectrum of a woman’s life in the way he approached shooting the film, which includes nudity and a nonchalance around sex.

The only people who see Gloria in her entirety, though, are the viewers. Everyone else, as in any life, Moore pointed out, only gets little bits. Her mother, children and boyfriend each experience different iterations of her. “So there’s a marvelous feeling of looking at her life and thinking about your own.”

The movie rides a fine line between making you feel sorry for Gloria and inspired by her. How audiences read her is a Rorschach test of sorts for how they think about single women and their capacity for happiness in a society that rarely celebrates being alone. Moore said she talked about this idea with her friends and daughter, too, when it came to shaping the character.

“There’s nothing tough about Gloria, and sometimes people talk about female characters as being tough or strong or powerful. I’m always like, I don’t like those words. I don’t know who those people are. That idea of being impermeable, that’s not very human. What’s interesting about Gloria is that resilience when you allow pain and shame and difficulty to penetrate you, and you still manage to move forward and find a way to be.”

Lelio said he made some adjustments in adapting the film for American audiences — Los Angeles required different details. Her character remains a collage of women from his own life, complete with oversized glasses and streaky blonde highlights.

“I grew up surrounded by women, my grandmother, my mother, her friends. I was the minority, and I always loved it,” he said. “Somehow all that turned into this strong desire to make female portraits.”

Gloria, he said, is more or less of his mother’s generation, even though she is younger than his mother in real life. “She was my main first source of discovery of what it’s like becoming older for a woman in life, to see the violence of that process in a youth obsessed society,” Lelio, now 44, said. “I was always listening to her stories, laughing with her, but also realizing that what she and her friends are going though is also really hard.”

Hollywood hasn’t always ignored stories like Gloria’s. Lelio pointed to a period in the 1970s when movies like “An Unmarried Woman,” starring Jill Clayburgh, and films by John Cassavetes starring Gena Rowlands took on such subjects. “There was a moment and that era of cinema was a big influence of Gloria Bell, it’s not that it was never there, it just got lost,” he said.

For the most part the men in the film come up short. They are stunted characters who consistently fail Gloria. John Turturro was hesitant at first to take on the role of her boyfriend, Arnold, who can’t commit, but said he appreciated the idea that like so many people he knows, his character keeps trying.

“It’s like in a Chekhov play,” Turturro said. “People try, but life sometimes takes over, we’re all still primitive in lots of ways and we all still do childish things.”

The fact that the movie doesn’t revolve around a male character was not only appealing, “it’s radical in fact.” He also said it made sense to focus on middle age. “When you’re facing questions about mortality, loneliness, your parents death, your children, and it’s really, really complicated time in women’s lives.”

It’s a subject area that Lelio plans to keep probing, at least for a while: “I feel moved by the idea of telling stories about women and creating complex portraits of them. It’s as simple as that.”