Leos Carax was sitting barefoot on the balcony of the Majestic Hotel in Cannes, chain-smoking as he gazed out at the French Riviera behind the sunglasses glued to his face. “Why don’t people in musicals fuck?” he wondered. “It’s not a rule, but it seems weird. Probably because it’s an old genre.”

With “Annette,” Carax is rewriting plenty of rules. By the time Adam Driver and Marion Cotillard shed their clothes, the Sparks musical has already launched its revisionist approach to the genre. The first song, “So May We Start,” finds Carax, the band, and the lead characters walking down the streets of Los Angeles and literally arriving at the plot of the movie.

The opening night Cannes selection, which Amazon Studios releases in the U.S. this August, blends the “Holy Motors” filmmaker’s usual enigmatic storytelling with a rock opera structure driven by the band’s compositions. Sparks band members Ron and Russell Mael conceived of the idea years ago, but Carax revised it several times in the seven years they spent teasing out the idea.

He also contributed new lyrics to several songs. “We changed it from Broadway to cinema,” he said. “The brothers live in this Sparks bubble, which is pop fantasy. There was a lot of irony. Irony in a cinema is a danger, I think. It has a tendency to make everything less crucial, less real.”

So when it came to “We Love Each Other So Much,” the romantic composition that Driver’s fiery comedian and Cotillard’s famed opera singer belt out early on, Carax said he wanted to change things up. The song first takes place as the couple roam the woods, then moves to a motorcycle ride, and culminates in the sack, where a fleeting glimpse of cunnilingus might be the first in film history to take place in a song. “It was a fun process for everyone,” Carax said. “The only difficulty was for Marion to sing with her head in a very difficult position.”

Driver serves as producer on the project, though Carax originally envisioned Joaquin Phoenix for the part when Sparks brought the idea to him in 2012. “I don’t like to meet actors with a script. I just wanted to see if he liked the idea,” Carax said. “But he was too shy to meet.”

Then he saw Driver on HBO’s “Girls” and reached out. They started developing the role together just as Driver geared up for “Star Wars: The Force Awakens,” which consumed his schedule for years to come. “He was a nice boy then,” Carax said. Driver’s rising stardom brought new financiers to the table (the project was produced by Amazon and ARTE France, among others). “That both helped and didn’t help,” Carax said. “It helped get it made but then you have to fit it into his schedule, which was not easy.”

The French director has connected with many American actors in the past. In the ’90s, after his dazzling romance “Lovers on the Bridge,” he met with Sharon Stone for a project to be produced by Martin Scorsese, but it never came to pass. Carax has grown weary of developing roles for specific performers in the years since. “Casting is a terrible thing,” he said. “It shouldn’t exist. Each time I imagine a film with anyone in mind, I don’t end up doing it, because I can’t find these people or the money.”

Those challenges receded once Driver decided to serve as producer on the project for the first time in his career, though Carax claims he had no idea that Driver was working behind the scenes to get the movie made. “I only found out he was doing that when we did the credits,” Carax said. “Obviously, it’s important to him. I know he has powers and he used them to help the film. But we don’t talk about that.” 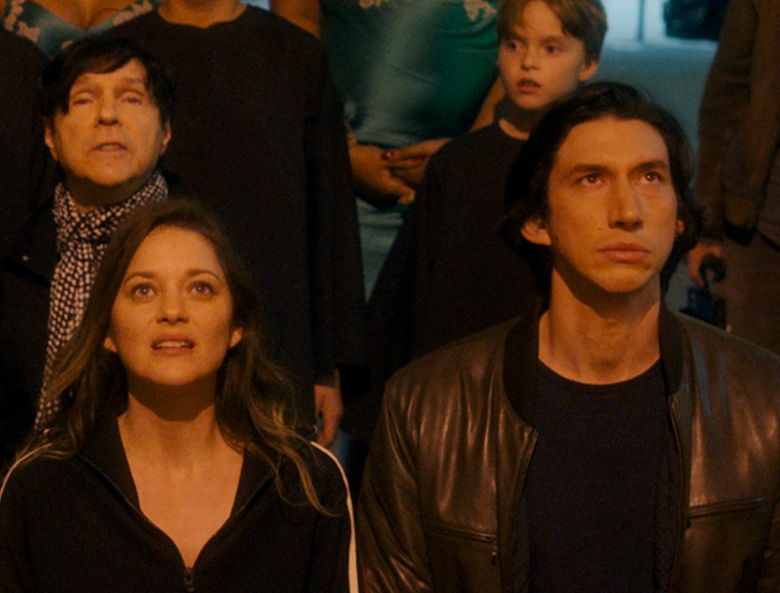 Instead, they focused on the character, raucous comedian Henry McHenry, who bounds about the stage in aggressive performances that shock and unsettle his audience until they revolt. There were a few inspirations for the role.

“We obviously talked about Lenny Bruce, Andy Kaufman, and this guy who went into that racist rant from ‘Seinfeld,’” said Carax, referring to Michael Richards. “I read a lot of autobiographies of standup comedians that were really interesting,” Carax said. “I read Richard Pryor and Steve Martin, because of the scene where he vomits before going onstage when he’s opening for Nina Simone, who I love, and she tries to console him. That was a great scene.”

All of it, of course, takes place in verse. Sparks initially composed 80 tracks for the project, a figure that was cut down by half over the course of the writing process. “There were many versions of every song, depending on where the story was going,” Carax said.

That meticulous process speaks volumes about the glacial pace of Carax’s career. “Holy Motors” was his first feature in 13 years, and “Annette” comes nearly a decade later. But Carax said Driver is eager to get the filmmaker rolling on a new project in the near future. “Adam wants to shoot next year,” Carax said. “He’s always ready. I’m not sure, but I’ll probably make another film one day. Will it be a small film or a big one with a star? I have no idea. It depends on several things. Money, inspiration, the world, casting.”

And the industry is changing all the time. Carax said he felt that cinema belongs on the big screen, and while “Annette” was getting a huge audience through Amazon, he admitted that he wasn’t hopeful about the rise of streaming platforms. “I don’t like it,” he said. “Platforms and COVID are the same for me. They want to keep you at home.” Nevertheless, he was able to rationalize the support during the production. “When you make an expensive film you sell your soul,” he said. “When you do it, it doesn’t feel that way, but when you’re done…”

He trailed off and lit another smoke. “Nobody gives a fuck about theaters anymore,” he said. “They’re too expensive. Platforms are easy. You can push a button and that’s it. They don’t even tell you who watches it. They tell you it’s a success if it’s good for the platform. It’s a paradise for them and it’s hell for the filmmaker. That’s the truth.”

Yet Carax, whose love for the medium was kickstarted by everything from French New Wave films to Robert Bresson and Jacques Demy, saw potential in some kind of future for exhibition. “Cinema will always be the big screen for me,” he said. “People will need to go out again, but we can’t count on the big companies to make that happen.”