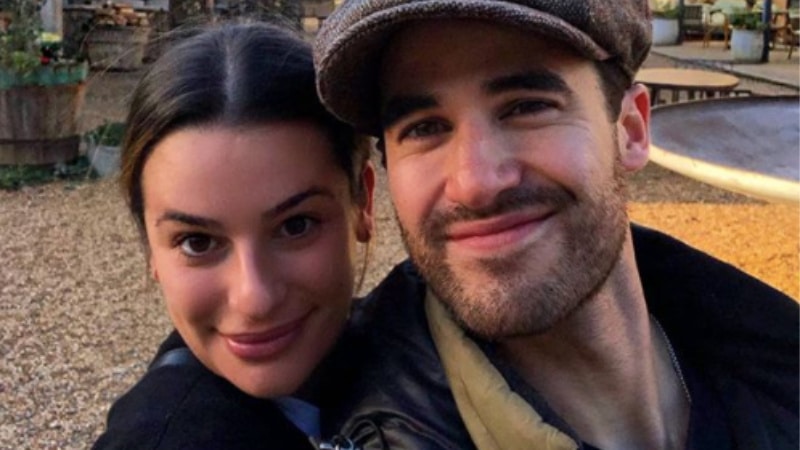 Lea Michele and Darren Criss have been on tour, sharing some memorable moments from their days on Glee together on stage. They are wrapping up their performances shortly so they can enjoy the 2018 holiday season.

Lea Michele thanked her fans in an Instagram post, revealing it had been quite a year for both her and Darren. She explained that they had both been on tour together and they had both gotten engaged in 2018, making people wonder who their significant others are.

Who is Lea Michele engaged to?

Michele is engaged to Zandy Reich. The two actually got engaged back in April of this year, according to Harper’s Bazaar.

Reich, who is a company president of AYR, had been dating Lea Michele for over a year when he popped the question. The relationship first went public in July 2017.

Their relationship started out as a friendship but later turned romantic. He popped the question with a 4-carat elongated radiant cut ring, a ring she didn’t hesitate to share on Instagram after the proposal.

Harper’s Bazaar also reports that Reich has worked with Goldman Sachs, an investment company called Renaissance Capital, and apparel company, Theory. Michele is supposedly a fan of the apparel line.

Lea Michele was previously engaged to Glee star, Cory Monteith, who tragically passed away from a drug overdose in 2013. At the time of his death, he and Lea had just gotten engaged.

Darren Criss, on the other hand, actually got engaged almost a year ago. He shared the news on Instagram in a post from January 2018.

He’s engaged to his longtime girlfriend, Mia Swier. According to People Magazine, the two had been dating for over 7 years when he decided to pop the question. The two met before he was on television and before he became famous.

Mia Swier may not be in front of the camera, but she does work with celebrities. She attended the New York University’s Steinhardt School for Media Studies and Television Production, and she has worked with various networks throughout her career, including ABC, NBC, and USA Network, according to IMDB.

She worked as a writer and a producer at Fox Networks, including working on Glee, Screen Queens and more, alongside Darren and Lea. In 2009, she started a film production company called Effin Media with co-founder, Dan Bricker.

Mia and I have had seven and a half years of fun, wacky, wonderful, CRAZY adventures together. And I’m happy to announce that we’re kicking those adventures up a notch. We’re goin for it. To boldly go where neither of us have gone before. Engage. 🚀💍🖖

Lea and Darren worked together on Glee and they decided to take their music on the road, creating a concert experience for their fans. The tour is simply called the LM/DC tour, and it started earlier this year in the United States.

Criss has previously told Ellen DeGeneres that his set with Lea Michele is a mix of fun stuff, including some Glee performances, some Broadway songs, and some of their original songs.

We are so excited to bring our show to Glasgow tonight! Only three more days left of tour! #LMDCTour

Michele and Criss have just wrapped up six shows in the United Kingdom, playing their last show on December 7 at the Birmingham Arena.