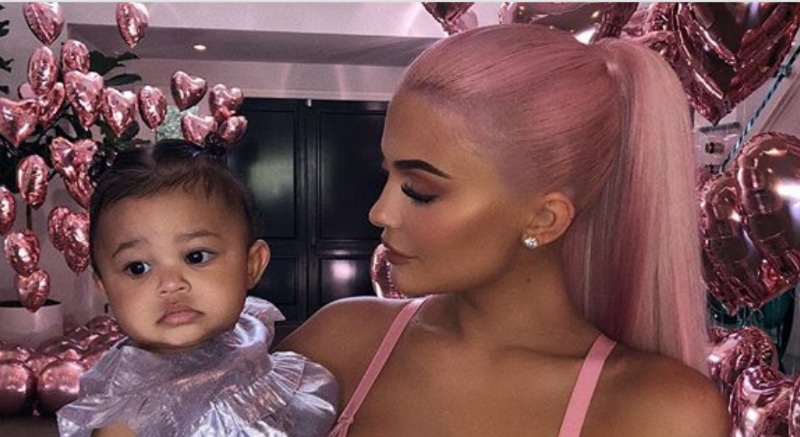 Kylie Jenner’s pregnancy has been described as the “best-kept secret” of 2018 by Kim Kardashian and while that may be the case, it’s her baby’s name that was the most Googled of the year. Soon after revealing that she was, in fact, pregnant all along, she also shared her daughter’s name, Stormi Webster.

How did Kylie Jenner’s baby get such a unique moniker? Well, the Keeping Up With The Kardashians star has explained exactly how that came about.

It was during Kylie’s collaboration video with James Charles that the KUWTK star talked in depth about baby Stormi and how her name came to be. It turns out that she and baby daddy Travis Scott can’t agree on who came up with Stormi’s famous name.

“It was me! I remember the whole thing but he swears he made her name up,” Kylie told James.

“I was just looking on nature names, like weather-earth inspired, Storm was on there, but I was like, I kind of want an ‘ie’ like me,” Kylie continued. “So then I did ‘Stormie.’ It was always Stormie… and then I didn’t fully choose her name, I wanted to have like a week of just me and her to see if I wanted to change it.”

“When they called me from the birth certificate office and I was finalizing the name. I was like S-t-o-r-m-i…Literally, right then and there I just changed it to an ‘i.’ And they were like ‘Okay.’ I hung up the phone and I was like, damn, I guess that’s her name!”

And just like that, another KarJenner kid was born and given a very unique name.

Of course, Stormi’s last name, Webber, is something she got from her dad. Travis Scott’s real name is Jacques Webster and rather than giving Stormi her dad’s stage name, she took on his legal surname.

Given all of the secrecy and rumors surrounding Kylie Jenner’s pregnancy, it’s not a huge surprise that her baby name is the most Googled baby name of 2018. However, the KarJenner clan took three of the top five in that category, with the Royal baby coming in second, then Khloe Kardashian, Cardi B and Kim Kardashian.