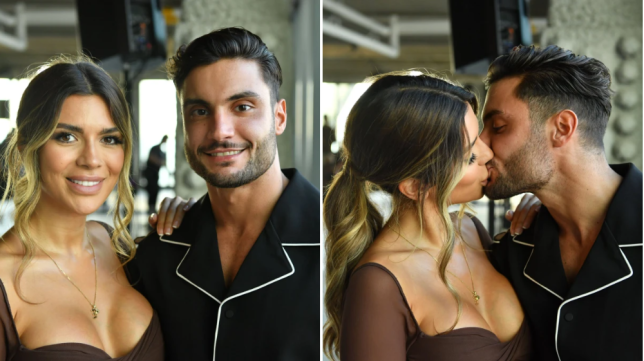 Ekin-Su Cülcüloğlu has announced she and Davide Sanclimenti are taking the next step in their relationship and moving in together.

The pair won hearts during their time in the villa, with their relationship being pretty explosive at first (and Davide famously labelling Ekin-Su a ‘liar’ and an ‘actress’ in one argument).

But the Love Island 2022 winners are now stronger than ever, with the Turkish soap star, 28, revealing that the Italian Stallion, 27, popped the question over a romantic meal.

‘Davide just surprised me! It’s official we are moving in’ she wrote on Twitter, along with a picture of ‘Moving In?’ written out in chocolate sauce next to a tiramisu.

For those who may not remember, the tiramisu played a part in their Love Island journey, after Davide made her the homemade Italian dessert as a way of proving how committed he was.

‘The beginning of a new beautiful chapter,’ he captioned the video, as he sat opposite a beaming Ekin-Su.

‘Yes!’ she of course agreed, as the pair shared a kiss and fed each other spoonfuls.

This comes after Ekin-Su opened up about the difficulties of having a relationship in the public eye.

‘One thing I’ve learnt in this relationship, you have to trust your boyfriend or girlfriend because in the public eye, it’s not easy,’ she told OK!.

‘Especially when people will make up rumours or say things, or they see things, or things could look different from a picture.

‘You just have to communicate with your partner, trust your partner and keep your relationship private.’

In the meantime, fans won’t have to wait long to see them on screen again, with their new Ekin-Su & Davide: Homecomings series announced last week.

In it, the couple will travel to their respective hometowns in Italy (where more tiramisu might be on its way) and Turkey, while Ekin-Su is also currently in training for the upcoming season of Dancing on Ice.

Love Island is available to watch on ITV Hub.