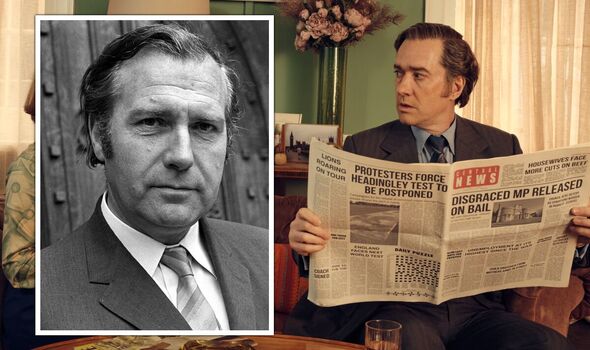 John Coffey, 88, has spoken about the dramatic decision that brought down Stonehouse, the Labour politician who fled Britain in November 1974, faking his disappearance and death. He had left a pile of clothes on Miami beach, to make people think he had either drowned or been eaten by a shark. But the former Postmaster General wanted to start a new life in either New Zealand or Australia with his secretary Sheila Buckley.

And Mr Coffey will appear in a documentary accompanying the drama, The Real John Stonehouse, with both going out on ITV.

Coffey and his team had singled out a suspect who had made suspicious bank transactions in Australia. He had the look of “a toff”, and the officers believed he could even be Lord Lucan.

But until they searched his luggage they had no evidence.

“If it hadn’t been for a matchbook from the Fontainebleau Hotel, he would have got away with it,” admitted Coffey. “We had nothing on him.”

Stonehouse was known to have stayed at the Miami hotel before disappearing.

Coffey, then 36, was a senior detective in the Melbourne Fraud Squad in 1974. Yet he has received little recognition for his dogged police work in arresting Stonehouse, which concluded a two-week operation tailing the suspected fraudster.

At the time Mr Coffey believed he might even have been on the trail of Lord Lucan, who had gone on the run in the same month.

Mr Coffey had read about both Lucan and Stonehouse in English newspapers during the operation.

Stonehouse’s elaborate plan faltered when he started moving large sums of money across the world to cover his tracks, but under different names – Clive Mildoon, and Joe Markham.

“The banks had been in touch with us at the Fraud Squad,” explained Mr Coffey.

“We talked to a teller at one of the banks about a customer who had just made a withdrawal of a large amount of money.

“When the teller went out to have his lunch, he met a colleague from another bank, further up the road. The second teller said the same customer had just deposited a similar amount of money with him. But they had different names.

“We were worried about the status of the cheque or money order. Then as we were talking to the first teller, the suspect in question suddenly walked down Collins Street, right in front of us. ‘Here he comes now!’ the teller said. We had to make a decision then on whether to grab him or not.”

But Coffey explained they had no evidence of an offence, so they decided just to “look at him” and put him “under observation”.

He recalled: “He was quite a tall man, very straight and upright. He looked like a toff!”

The son of a female mayor of Southampton, left-wing Stone-house went to a grammar school, before attending the London School of Economics and becoming a Labour MP.

Coffey said: “There wasn’t much to go on. For one, white collar criminals don’t actually look like bad people. We just had to gather facts at that stage.”

A team of six detectives then watched him for several days as Stonehouse bought and read English newspapers.

Coffey said: “I went to the British Embassy to read some of these papers and I saw there was a missing lord – Lord Lucan!

“I thought our fellow had the appearance of a Lord Lucan.

“I then began thinking he might be a murderer.

“We thought he might have murdered either of the two men whose identities he’d taken.”

Police around the world were on alert for Lucan at the time. He had murdered his nanny Sandra Rivett, allegedly mistaking her for his wife.

Detective Coffey said: “We just concentrated on what we had.

“Next thing, our suspect was on the move. He had changed his accommodation from some sleazy rooms in inner-city St Kilda to a nice Flinders St unit complete with a swimming pool. He’d gone upmarket.

“I had a chat with the manager of the fancy units and got access to Stonehouse’s room. Didn’t see much at first, then just as we were leaving I spotted, among a collection, a box of matches from the Fontainebleau Hotel in Miami.

“I actually recognised the hotel from my time as a steward on the Cunard Lines doing the West Indian cruises.

“One of the real problems was that we hadn’t been provided with a proper picture of Lucan.

“We couldn’t make a match but I was very much leaning towards our fraudster being Lucan.

“It was coming up to Christmas, so it was time to do something.

“We hadn’t identified him as either man so we grabbed him to see what he would say.

“We grabbed him as a suspected murderer but he never said a word for two hours!”

Yet Coffey still thought there was something “very suspicious” about him, because people normally don’t “remain silent”.

Scotland Yard then gave Coffey information about a scar that Stonehouse had on his left leg.

“So we pulled up his trouser leg, and we saw the scar. He didn’t really react. We then told him that his mother was very sick and she wanted to talk to him to make sure he was still alive.

“Stonehouse realised the game was up and said, ‘I’ll ring, Mum’.

“He then rang his wife. She knew he was still alive.”

Mr Coffey said Stone-house’s mood changed dramatically. “Once we knew what it was all about he went from Lucan, the murderer, to Stonehouse, the thief.”

Some reports suggested Stonehouse and Lucan had scars on different legs, and that was how the police ruled out the suspect as being Lucan.

Mr Coffey denies this, saying: “Trouble is, a lot of rubbish has been written about this case. For example, a lot of papers reported Sheila, his secretary, was in Australia with him when we arrested him. That’s not true. He was on his own. I want to clear this up.”

However, there was little recognition for his prized arrest. “On the day of the arrest Cyclone Tracy had gone through Darwin. It made the front page.”

It took six months to get Stonehouse back to England where he eventually stood trial. He was sentenced to seven years in jail. Coffey revealed the mistress Sheila Buckley took a dim view of him.

“I’m not sure why. She should have been cross with Stonehouse I thought for leaving that box of matches from the Fontainebleau Hotel, sitting in his luggage. And it was just luck that I saw it.

“If it hadn’t been there, I don’t think we would have arrested him.

“We would have written it off because he’d committed no offence in Victoria.”

Asked why he thought Stone-house had tried such an audacious plan, he replied: “Love does strange things, doesn’t it?”