Adil Ray, 47, joined Susanna Reid, 50, to host Good Morning Britain, and throughout the programme, the pair discussed the increasing number of cases of the Indian variant in the UK. The duo were joined by Secretary of State for Business, Energy and Industrial Strategy, Mr Kwarteng, 45, to debate the action taken by the Conservative Party to lower the risk of the coronavirus strain. However, as the politician tried to defend Mr Johnson, 56, and his team, the journalist launched into a furious tirade at his guest.

Reid was leading the conversation as she wanted to know why India was not put on the red-list of countries not to travel to sooner than last month.

Although the politician explained the Government knew India was a “dangerous place” in terms of the virus spreading, he said it was a “close call” to stop travel to the country.

The presenter added it was “not a close call” and cases were already starting to skyrocket sometime before the Conservatives took action.

Trying to deflect from the premise of the debate, the guest began discussing the success of the vaccination programme in Britain.

However, Ray was not going to let Mr Kwarteng skirt over the issue and confronted him in a furious clash. 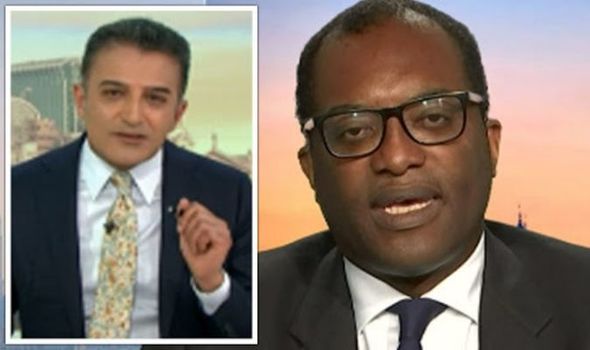 “Hang on, I’m not going to accept that. You’re talking about the vaccination rollout…in that case, why do we have red list countries at all?” Ray asked.

“Why don’t we look at Pakistan, with far lower cases than India? Do we not say, ‘We won’t put Pakistan on the red list because our vaccine rollout is strong?’

“It seems to me you’re finding excuses to try and justify why you made a catastrophic error with India.

“Rather than accept you made a mistake. If you’re going to talk about vaccinations, then you can apply that to any country in the world right now,” the presenter continued.

I’m not going to accept that

A furious Ray declared: “India has a population of over a billion people. 10 flights a day were coming in.

“20,000 people, 30 percent of them, immigration authorities who are connected to your Government tell us weren’t self-isolating.

“We know there are 160 people, at least, had the Indian variant. It was a mistake and just accept that.”

Mr Kwarteng replied: “The vaccination rollout is key and that’s what is keeping people safe and I absolutely right to say this is important.”