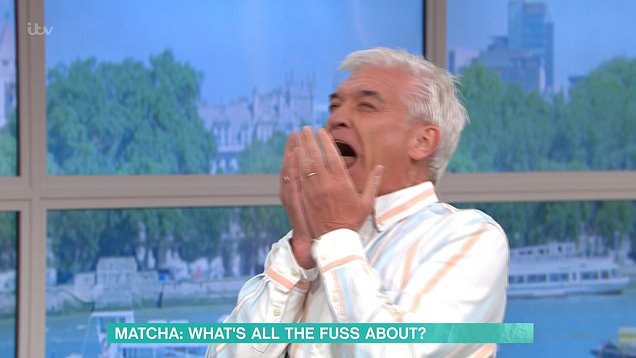 Phillip Schofield had the best reaction after trying matcha for the first time on today’s episode of This Morning.

Just when viewers thought Phil drinking horse milk was the funniest moment of the year, he outdid himself with yet another side-splitting live telly doozy.

The presenter was joined by Holly Willoughby’s stand-in Rochelle Humes on Monday’s show when he was asked to sample the finely ground powder of specially grown and processed green tea leaves in tea form as part of Liz Earle’s health segment.

Before taking a huge swig, Phil gave the matcha tea a sniff and looked apprehensive about giving it a taste.

He then proceeded to take a giant gulp, but immediately stuck his tongue out and recoiled in horror as the taste hit him.

Letting out an almighty wail, Phil screamed: ‘What the hell is that?’ 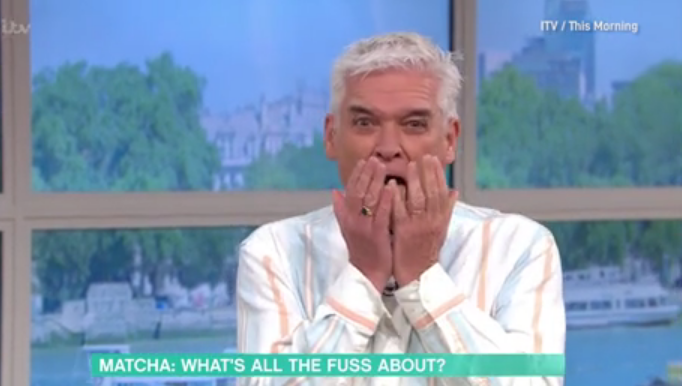 ‘It’s really not a good one,’ Rochelle cowered, as she agreed: ‘Wow, even I don’t like that’.

‘It is quite grassy,’ Liz replied, as she tried to maintain composure during the segment. ‘What you might like instead then… do you know you can bake with it?’

‘You can make matcha muffins, matcha doughnuts,’ she continued. ‘They’re popping up everywhere’.

But Phil looked far from convinced and scrambled to find anything to eat to take the taste of the tea away.

Viewers were in stitches over the scenes at hand, with many turned off by the thought of ever sampling matcha for themselves.

Looks like Philip had a great night on the town with Kermit the frog ð¸.. #ThisMorning pic.twitter.com/TfcvvX3NrY

‘I don’t think I’ll be drinking “matcha tea any time soon thank you very much,’ wrote one.

‘Today sales of Matcha have plummeted after Philip Schofield reaction on this morning,’ added another.’

Oh, the joys of live television.