DJ Conner will be gone, but not forgotten, when The Conners kicks off Season 5.

As TVLine exclusively reported, legacy cast member Michael Fishman has exited the Roseanne spinoff after four seasons. But at the time of our initial reporting, we didn’t know how the ABC sitcom would address DJ’s whereabouts.

Speaking to TVLine in advance of the Wednesday, Sept. 21 premiere, executive producer Bruce Helford explains that Becky and Darlene’s younger brother will be roughly 7,000 miles west of Lanford this fall.

“He’s visiting [Geena], who right now is stationed overseas,” Helford reveals. “She was involved in the withdrawal of troops from Afghanistan, and she is still overseas on assignment, so he is going to be going over and spending time with his wife…. It does get addressed in the first few episodes.”

When The Conners first launched in 2018, the principal cast also included Maya Lynne Robinson as DJ’s wife (and Mary’s mother) Geena. But after Season 1, Robinson departed for a role on CBS’ The Unicorn, at which point Geena reenlisted in the Army. She returned to Lanford in the Season 3 finale, but did not appear in Season 4. Now, husband and wife will be reunited off screen. 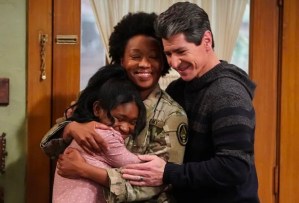 Though there are no current plans to bring Fishman back, the EP suggests that we haven’t necessarily seen the last of DJ.

“We love him,” Helford says of Fishman. “He’s part of the family. There’s certainly no one saying he will never be on the show [again]. It’s just a matter of whether storylines come up that are built for that.”

Following word of his exit, Fishman released a statement, which in part read, “While I was told I would not be returning for Season 5, Lanford was a valuable place to grow up, learn and develop. I was incredibly lucky to return home and demonstrate my expansion. As I venture into the world to build the future, I send tremendous love and success to everyone involved in production.”

Will you miss Michael Fishman on The Conners? Pleased with what the Powers That Be have planned to address his absence? Sound off in Comments.