Charlie and Nick made us root for their love on Netflix’s new teen drama Heartstopper, and that support paid off in the Season 1 finale, when the adorable pair officially became a couple.

The road to romantic bliss wasn’t easy. For starters, Charlie had to confront his secret ex-boyfriend, Ben, after defeating him in a relay during the Truham-Higgs sports day event. A jealous Ben threatened to tell everyone about Charlie and Nick, but Charlie fearlessly replied that if Ben did that, he would tell those same people what he and a closeted Ben used to do back in the day.

Best of all, Charlie told Ben: “You don’t get to make me feel like crap because you hate yourself.” Around the same time, on the other side of the yard, Nick played rugby with his team. He kept looking for Charlie in the crowd, but he didn’t see him until Charlie walked over and stood on a bench. Nick was so overcome with love in that moment, he interrupted his own conversion kick in the middle of the match to run to Charlie and grab his hand, so they could dash away together and be alone.

Imogen smiled when she saw Nick and Charlie holding hands because she finally understood that Nick, on whom she had crushed, truly loved Charlie. Tara and Darcy also looked on approvingly. As the only official lesbian couple at Higgs, the girls came out and unintentionally gave Nick the courage he needed to love Charlie openly. Perhaps Tao and Elle will make their love leap next. 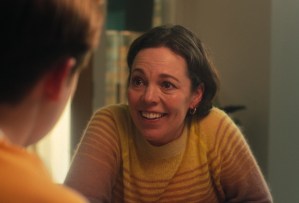 Alone at last, Nick told Charlie he didn’t want to break up and confessed that Charlie had made his life better, not worse. Nick told Charlie he was his favorite person and asked him out on a date. The two took a train that Sunday and Nick kept the location — which turned out to be the beach — a surprise to make Charlie happy. And Charlie was so happy as they ran to the shore and Nick said he loved liking Charlie.

Nick shared more good news and revealed that he was going to come out to the people who mattered, and this included his mom, who he told in a wonderfully warm and encouraging flash forward. In turn, his mom hugged and thanked him for being honest as Nick explained he was bisexual and Charlie was his boyfriend. Nick even tried to unpack what bisexual meant, and his mom chuckled and said she was older, not ancient. 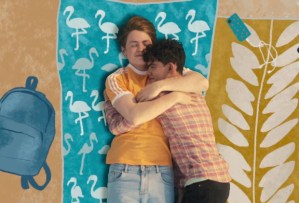 Charlie asked if they were officially boyfriends, and Nick laughed and said he thought it was obvious that they were. Nick picked up Charlie, held him in his arms, and announced they were boyfriends to the seagulls and the sea.

The two then kissed, snuggled on a beach towel, and smiled about a future where they could just be themselves and continue to fall in love.

What did you think of the Season 1 finale of Heartstopper? Are you thrilled that Charlie and Nick are a couple now? Grade the closer in our poll, and drop your thoughts in the comments.