“Greed” is good enough — if only just. A serrated but superficial portrait of how capitalism distances the rich from its consequences, Michael Winterbottom’s damning sendup is often right on the money, but its broadside attacks on the ultra-rich are too obvious to draw any blood or raise our hackles. What more could you really expect from a bitter comedy about a Branson-esque billionaire named Rich McGreedy? Okay, technically the business tycoon that Steve Coogan plays is called Sir Richard McCreadi, but no one in the movie (nor anyone watching it) is fooled by the spelling; Winterbottom and co-writer Sean Gray aren’t exactly trying to get away with it.

“Greed” likens Richard’s lifestyle (and the tax-dodging schemes through which he maintains it) to a magic trick, and the case could be made that the film only exists for the gallows humor it gleans from a system that’s allowed the world’s 28 richest people to have more money than its 3.8 billion poorest. It’s obvious, and that’s the point — that, and how insidiously it obfuscates the dehumanization of doing business. We know that H&M can only sell a pair of jeans for $25 because the women of a Sri Lankan sweatshop weren’t paid a living wage to make it, but it’s hard to connect the dots with the price tag in your hand. That dilemma doesn’t quite redeem a tepid slice of “eat the rich” satire that isn’t as nuanced or bracingly scabrous as a random episode of “Succession,” but it helps explain the straitjacket that Winterbottom’s film struggles to escape. How do you force people to actually look at something they see every day, and what good does that really do?

It’s just a few days before Richard’s 60th birthday, and the fashion-industry magnate is stressed out about the star-studded blowout party he’s planning for himself in Mykonos. Then again, he’s the kind of guy who came out of the womb with a chip on his shoulder, and has lived every day like it was something to win. (Coogan, who could do this sort of shit-eating imperiousness in his sleep, at least gets to spice it up with some flowing hair and a ridiculously white set of fake teeth.) The theme for the bash is “Gladiator.” No, not gladiators, but the Ridley Scott movie “Gladiator.” From his disarming ex-wife (Isla Fisher, in a diluted version of the role she played in “The Beach Bum”) to his vaguely sociopathic teen son (Asa Butterfield), Richard’s entire family seems to know every one of Russell Crowe’s lines by heart; someone even rightly points out that Maximus fought tigers, but it’s too late to return the enormous lion that’s waiting on stage for the big night. Alas, the unenthused Greek and Bulgarian construction crew charged with building a massive wooden arena in less than a week seem to have a more ambivalent relationship to the Best Picture winner. 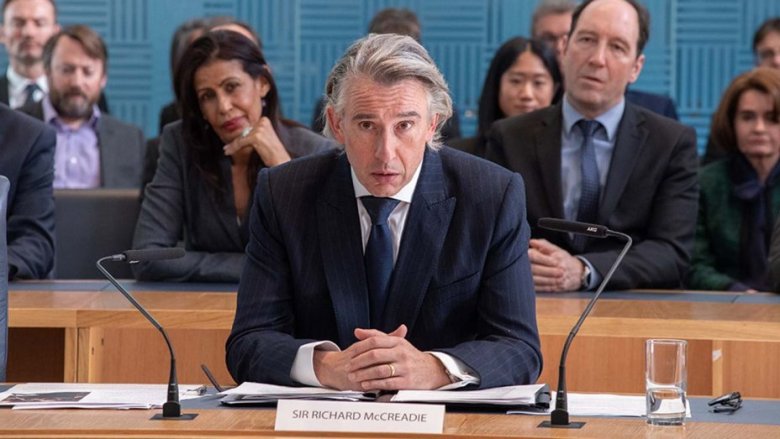 But even if they finish assembling the set in time, it won’t guarantee that all the celebrities Richard invited actually bother to show up to collect their checks. And what’s he supposed to do about the small community of Syrian refugees who just washed up on the shore? Sure, it’s a public beach, but poor people can be such an eyesore! The party is designed to project an image of ridiculous success because Richard feels like he’s only as wealthy as other people think he is (and when your money is floating between a zillion different shady bank accounts, there may be some truth to that). Perhaps that’s why he allowed his reality TV-star of a daughter to bring along a camera crew, and why Winterbottom indulged in a painfully forced subplot that fails to earn a single moment of its screen time.

There’s plenty of other ways that Winterbottom could have spent that time. Briskly skipping around the years with an erratic flashback structure that distills Richard’s life into a series of predatory business deals and profanity-laced tirades at shellshocked employees (Gray wrote for “Veep,” and it shows), “Greed” offers a kaleidoscopic view of a one-dimensional man. The fragmented plotting is rationalized by the fact that Richard’s biographer, a bumbling journalist called Nick (David Mitchell), is there to document the event and interview attendees. It’s hard to imagine he’d be able to write an interesting book on the subject, as Richard’s life is a story that might be more vividly told by an accountant; but men like Richard only exist because men like Nick are fooled into being fascinated by them.

Amanda (Dinita Gohil), a young British-Sri Lankan who does some unspecified job for Richard, might be the only one who’s different. She seems immune to his Ozymandian strength from the start, and the true depth of her mixed feelings makes for both the film’s sweatiest plotting and its most satisfying beats. “Greed” is seldom funny enough to justify its shallow caricatures, and it’s seldom pointed enough to justify having so few good jokes, but the climactic party sequence — in which Amanda takes center stage — is such a perfect storm of affluence and idiocy that it manages to blur the line between magic and tragic (to paraphrase one of Richard’s favorite sayings) and show oligarchs for the scared little boys they often are.

Still, in a sorry gambit that Winterbottom steals from “The Big Short,” “Greed” doesn’t really show its teeth until the closing title cards, which present a series of familiar but eye-popping statistics about the global wealth gap and the barbaric practices through which fashion brands in particular are able to make their billions. It’s like a much darker and more sobering riff on the scene from “The Devil Wears Prada” in which Meryl Streep lectures Anne Hathaway about the labyrinth of choices that had to be made in order for her to choose and afford her cerulean sweater.

Miranda Priestly might see that big machine as a testament to the artistry of her profession, but Winterbottom smartly (if only just under the wire) condemns the various buffers that are put between people and the things they buy. Capitalism only works because some people don’t care about how much a t-shirt really costs, and the rest of us are too far from the truth to see it clearly. If Winterbottom had gotten down to business before his movie was basically over, perhaps “Greed” would have been worth more than the time that it takes to watch.

“Greed” premiered at the 2019 Toronto International Film Festival. Sony Pictures Classics will release it in the United States in 2020.