“You know why America loves a crime story? Because America is a crime story,” mob boss Josto Fadda (Jason Schwartzman) argues in the fourth season of Fargo. We are a nation built on stolen land, with the labor of stolen people. And perhaps because of this, as Josto notes, we tend to root for the takers in these stories, rather than the innocent victims being taken.

The long-awaited fourth season of the great FX crime anthology series has no shortage of colorful takers to root for, or against, in its tale of a syndicate war in 1950 Kansas City. On one side are Josto and his hot-headed brother Gaetano (Salvatore Esposito, from the Italian hit Gomorrah) and their army of goons in shiny suits. On the other is Loy Cannon (Chris Rock), who has forward-thinking plans (like partnering with banks to issue credit cards), if only the white establishment would listen to a black man on such matters. There are wildcards like Rabbi Milligan (Ben Whishaw), orphaned survivor of two previous mob clashes, and Oraetta Mayflower (Jessie Buckley), a nurse with sticky fingers and a ruthlessness that belies her Minnesota Nice demeanor. Even many of the cops we meet are shady, whether twitchy military veteran Odis Weff (Jack Huston) or smug U.S. Marshal Dick Wickware (Timothy Olyphant). One of the story’s few true innocents, it seems, is 16-year-old Ethelrida Pearl Smutny (E’myri Crutchfield), whose mortician parents are in debt to the Cannon gang(*).

(*) Can we pause a moment and reflect on the series’ endless supply of wonderfully absurd names? Previous installments gave us, among many others, Nikki Swango, Gloria Burgle, Molly Solverson, and the Kitchen Brothers. Here, character actor and national treasure Glynn Turman plays Cannon’s adviser, Doctor Senator, who is neither a Senator nor a doctor (though he has degrees in both law and economics from Howard), while Oraetta works for the arrogantly patrician Dr. Harvard (Stephen Spencer), educational bona fides unknown. And that’s before we get into, say, the bank-robbing lesbian couple, Zelmare Roulette (Karen Aldridge) and Swanee Capp (Kelsey Asbille), or that there are kids named Zero (Jameson Braccioforte) and Satchel (Rodney L Jones III), or that Dick Wickware’s nickname is Deafy, or… Just sit back and enjoy this bounty of nomenclature. 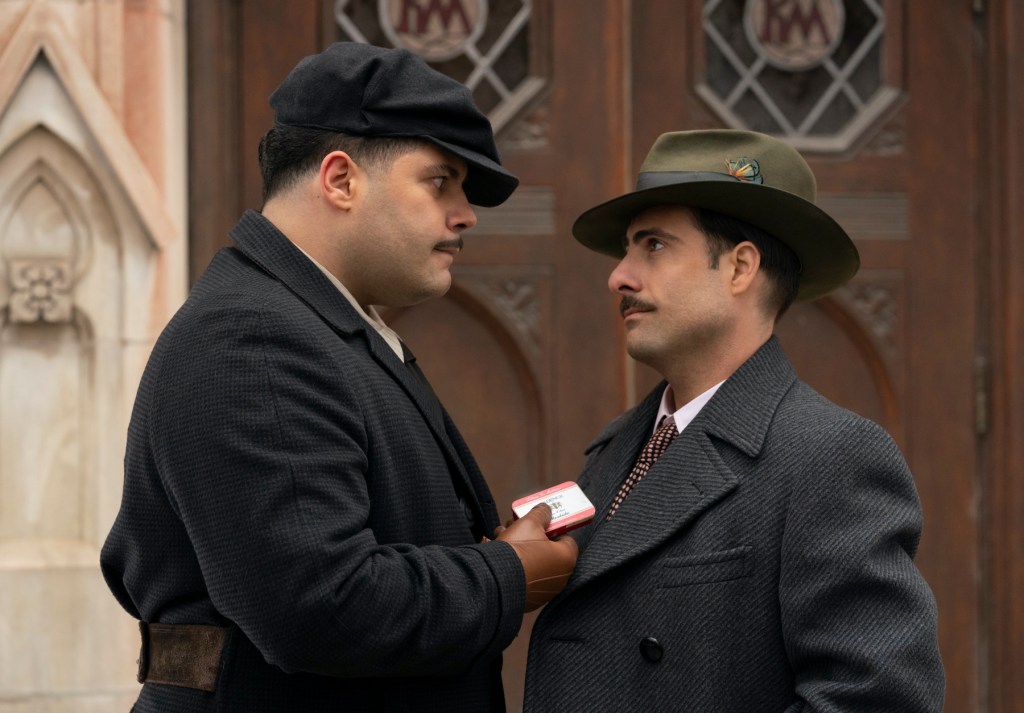 Esposito and Schwartzman as brothers Gaetano and Josto Fadda.

Ethelrida narrates the premiere, and is wise enough beyond her years to explain what this pulpy story has to say about the immigrant experience in the United States, and the ways the system pits groups against one another so that they can’t team up to change the status quo. “If America is a nation of immigrants,” she asks, “then how does one become American?” The class struggle goes well beyond this specific conflict between blacks and Italians. Deafy Wickware, for instance, brags of having helped chase Italian interlopers out of Utah, even though as a Mormon in 1950, he could technically be shot on sight within the borders of Missouri. Swanee, who’s part Native American, part Asian, dresses like a cowboy and talks off-handedly about the white teachers at her school “raping the native out of me.”

The huge cast and the very timely discussion of what it means to be American make this in some ways the most ambitious Fargo season yet. In others, it’s the most formulaic. As always, creator Noah Hawley and company throw in winks to Coen brothers films (look for a cattle gun like Chigurh’s from No Country for Old Men, used for its intended purpose this time). But the show largely seems in conversation with itself at this point, mixing and matching elements from installments past (could Rabbi Milligan, perhaps, be linked to Season Two’s loquacious Mike Milligan?), and counting on its impressive new ensemble to make it all work. Yet if it’s Fargo’s Greatest Hits, then don’t we deserve something fun after such a long wait(*), after such a tough year, and after Season Three (particularly the parts focusing on Ewan McGregor as feuding brothers) was a bit of a disappointment compared to the first two years?

(*) It’s been an even longer wait than originally planned (Season Three’s last episode aired in June of 2017), since two episodes had yet to be filmed when the COVID-19 quarantine shut down production, postponing a planned April premiere date. The cast and crew were recently able to return to the Chicago suburbs (which stood in for mid-century Kansas City) to resume work, and filming wrapped last week.

Rock is convincingly understated in his most prominent dramatic role to date; you won’t necessarily come out of these episodes shocked by the range of his performance, but you will believe him as this powerful, calculating man. He and Turman (who is fantastic as always) provide more than enough grounding to allow co-stars like Schwartzman, Buckley, and, especially, Esposito to play things far more broadly. (There are multiple scenes where it looks like Esposito’s eyeballs are on the verge of bursting out of his head, and not just when Gaetano is filled with rage.) Having Olyphant play so closely to Justified type is perhaps the least surprising casting choice in the show’s history, as if Hawley and the other directors told him, “Just do what you do.” But when you have an available actor who can play an arrogant, talkative lawman as charmingly as Olyphant, it’s an understandable impulse. (And Deafy is by far the more compelling of the two main cops, since Odis’ struggle with OCD leans too hard into the kind of self-conscious quirkiness of which the Coens are sometimes accused.) 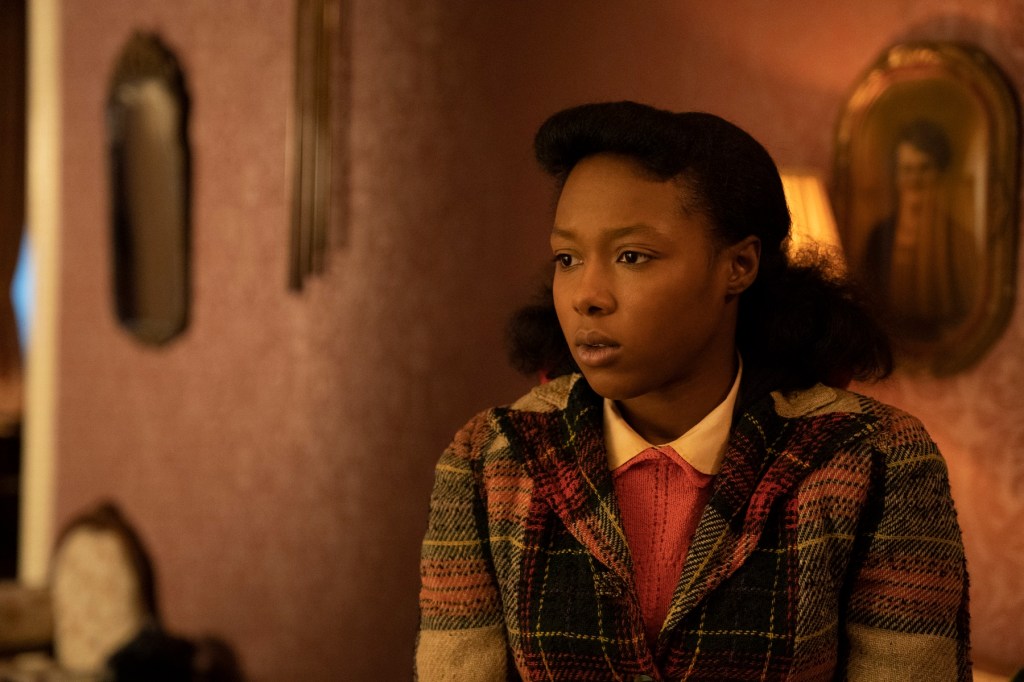 The sprawl of the ensemble and story at times becomes too much. Good luck keeping track of all the soldiers on either side of the war, even after an early scene superimposes all of their names over their bodies as they square off. E’myri Crutchfield makes a terrific impression in the premiere — cool and slyly funny in the way she deals with, among other things, attending a school full of racist teachers — but then Ethelrida shrinks in prominence as the focus shifts more towards all the grown men puffing out their chests at one another. And despite being one of the bigger names in the cast, Ben Whishaw is underused most of the time, up until he gets a big showcase in the ninth episode.

That installment, shot in chilly black-and-white, is by far the most Coen-y hour of the season, even as it’s simultaneously a tribute to The Wizard of Oz (because why not). Another episode climaxes with an action sequence shot at the train station famously used in The Untouchables. Like America itself, Fargo is a dizzying, delightful swirl of influences. And this move away from the series’ familiar Minnesota home turf is mostly a rollicking success. After all, there’s plenty of snow — and blood — to be found in a Kansas City winter, too.