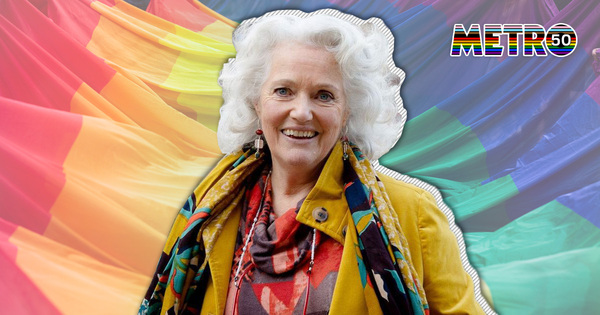 Popular Emmerdale character Mary Goskirk has spent decades wrestling with her identity and sexuality, with social acceptance changing over years.

And viewers will see her come out as gay to her stunned daughter Rhona (Zoe Henry) in emotive scenes.

This hits Rhona like a wrecking ball, as she feels her mum has lied to her. But in actual fact, Mary has been lying to herself over the years.

Rhona handles the situation in a terrible way by publicly outing her distraught mum.

But she does get an ally in the form of Kim Tate (Claire King), as Mary discusses coming out in later life and how she was forced to bury who she really is.

It’s a story that will move many fans who can relate to Mary’s situation, no matter the age of circumstance.

But the angle of focusing on an older character is something of particular interest to the story team, as show boss Kate Brooks exclusively told Metro.co.uk as part of our Pride Takeover week.

‘This story is a vitally important one to tell, as coming out in later life is something rarely portrayed on television,’ the producer reflected.

‘With the character of Mary, we wanted to explore her back story and how she struggled to accept her sexuality and was forced to suppress her feelings in order to conform to the social norms of society.’

Things may have changed over the years, but that doesn’t make coming out any easier when someone has lived a life when it goes against the norms of society.

And it is the fact that Mary has been robbed of precious time being who she really is, which makes the story one which will resonate.

Kate continued: ‘While progress has and continues to be made, for Mary she had to settle for convention and a life half lived.

‘We wanted to show Mary’s courage as she admitted to herself, and to the world, that she is gay and in doing so give people hope that you can still be your authentic self, whatever your age.’

Louise Jameson has quickly sealed herself as an adored figure in the village, with fans immediately won over by her no-nonsense but empathetic nature.

As for her relationship with Rhona, however, Mary will hope that her daughter will come round to the shock.

But, at the same time, this is not all about Rhona so it may take some time for Mary to accept what she has done too.

With everything that Mary has been through in the past, telling Rhona about her sexuality was no easy task.

Can Mary form a path forward with a daughter, in which they can both embrace the fact that she deserves to live her life and be proudly gay?

This year marks 50 years of Pride, so it seems only fitting that Metro.co.uk goes above and beyond in our ongoing LGBTQ+ support, through a wealth of content that not only celebrates all things Pride, but also share stories, take time to reflect and raises awareness for the community this Pride Month.

And we’ve got some great names on board to help us, too. From a list of famous guest editors taking over the site for a week that includes Rob Rinder, Nicola Adams, Peter Tatchell, Kimberly Hart-Simpson, John Whaite, Anna Richardson and Dr Ranj, we’ll also have the likes Sir Ian McKellen and Drag Race stars The Vivienne, Lawrence Chaney and Tia Kofi offering their insights.

During Pride Month, which runs from 1 – 30 June, Metro.co.uk will also be supporting Kyiv Pride, a Ukrainian charity forced to work harder than ever to protect the rights of the LGBTQ+ community during times of conflict. To find out more about their work, and what you can do to support them, click here.