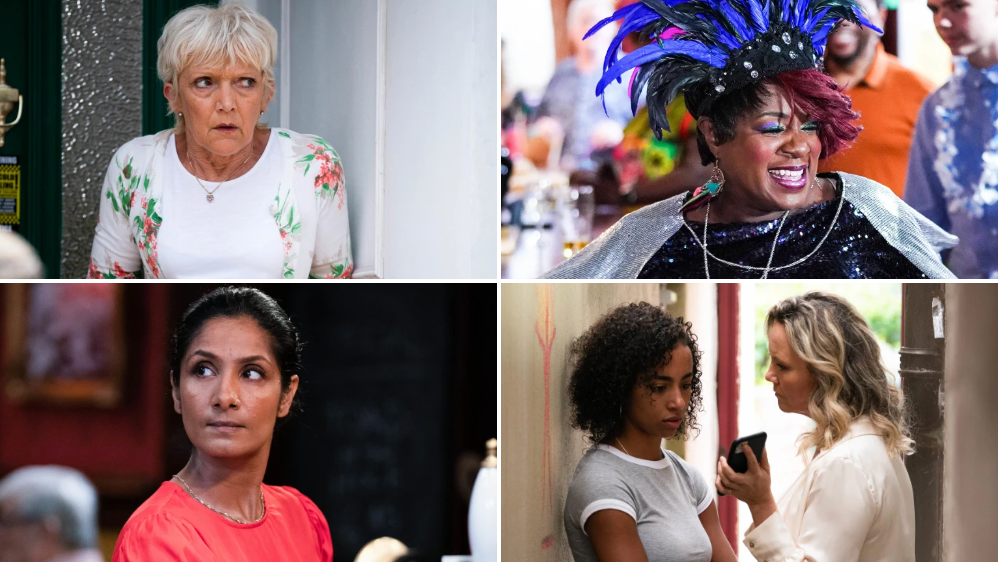 There are emotional goodbyes in next week’s EastEnders as Linda Carter (Kellie Bright) prepares to leave behind her children.

However, when the court rules against a prison sentence, her relief is overwhelming – but short-lived if Janine Butcher (Charlie Brooks)’s plot is pulled off.

Another person parting with their loved ones is Dana Monroe (Barbara Smith) as she sets to start a new life away from the Square.

But does she have unfinished business with Bobby Beale (Clay Milner Russell)?

It’s the day of Linda’s court hearing and Zack comforts her as she reveals that her divorce from Mick is official. Felix and Finlay interrupt to prepare for their Carnival themed party but are disappointed when Linda tells them she probably won’t make it.

Janine seethes when she realises Mick will still visit Linda if she goes to prison so gives a reluctant Jada money and blackmails her into helping her bring down Linda. Linda says an emotional goodbye to Ollie and Annie.

With Mick by her side, Linda goes to the hearing and delivers a passionate speech about her mistakes.

Both Mick and Linda are shocked when the judge doesn’t give her a prison sentence but Janine sees red as Linda walks back into The Vic. With the Carnival party underway, Linda joins in the festivities but Zack arrives with some alarming news.

Jean’s friends and family welcome her home but things get a little awkward when Arthur cowers away from Jean.  Jean tells Stacey that she will go to the Carnival party but when she steps outside she sees Harvey and Dana so immediately turns back.

Feeling bad, Harvey decides not to go to the party either and instead gives Dana his credit card to go shopping for university supplies.  After chatting with Stacey, Kheerat rethinks his feud with Suki but he’s rattled to learn Ravi and Nugget are moving in with his mum.  Billy is gutted when Honey turns down his invitation for a dance at the party.

A guilty Jada tells Janine they went too far but Janine brushes it off and continues to blackmail her.

Dana can tell Harvey has been drinking and he shuts her down when she suggests that he go and sees Jean. Rocky gives Billy and Bobby advice about the women in their lives, giving Billy an idea to put on a Carnival themed party just for Janet and Honey.

Eve observes Ravi taunt Kheerat about looking after Suki and tells Suki what’s happening. At the Slater’s, Kheerat offers to cover the cost of redecorating Jean’s bedroom but Stacey politely declines and asks him to stay with Jean while she pops out. Kheerat calls in a favour from Vinny and pots of paint arrive to redecorate her bedroom.

However things don’t go as planned and a paint fight breaks out between the kids, Eve, Kheerat and Jean. Suki knocks to speak to Kheerat but it’s immediately awkward so she leaves. Stacey arrives home to the mess.

Kheerat and Jean both encourage each other to face their fears, Jean going outside and Kheerat accepting that he needs to look out for his mum. Bobby, Harvey and Rocky plan a surprise leaving party for Dana and discuss whether they should invite Jean, with Harvey refusing.

Billy spots the exchange and realises Jean has overheard and tells Eve what happened. Eve encourages Harvey to be more sensitive, leaving a guilty Harvey contemplating if he should visit her.

Sam finds Ravi waiting for her at Peggy’s and assumes he knows Jonah but he tells her he’s looking for Phil. Upon learning he works with Suki, Sam throws him out. Ravi waits for Phil at home and almost catches him on the phone to Keeble who is demanding names.

After Ravi has left, Phil makes a phone call to a contact, Dodge, to try and get dirt on Keeble.

Unaware of the surprise party, Dana worries about her dad’s behaviour and despite Bobby’s reassurances, she tries to defer her place at university. Dana reluctantly follows Harvey into Peggy’s and as she reveals she’s not going to university as she’s worried about him, everyone jumps out and surprises her.

Kheerat tells Stacey his issues with Ravi and Stacey later gets what he means as Ravi tries to charm her. Stacey purposefully kisses Kheerat.

Kat warns Phil not to ruin their wedding and to get Keeble off his case. Phil meets with Dodge and gets some information on Keeble, before warning him to get out of the country.

Phil and Keeble meet and Keeble reveals her anger at Phil telling everyone on her list to get out of the country. Keeble is taken aback when Phil reveals he knows she has an ulterior motive, so she hands him a photo of someone and demands information on them otherwise he’ll be back in prison.