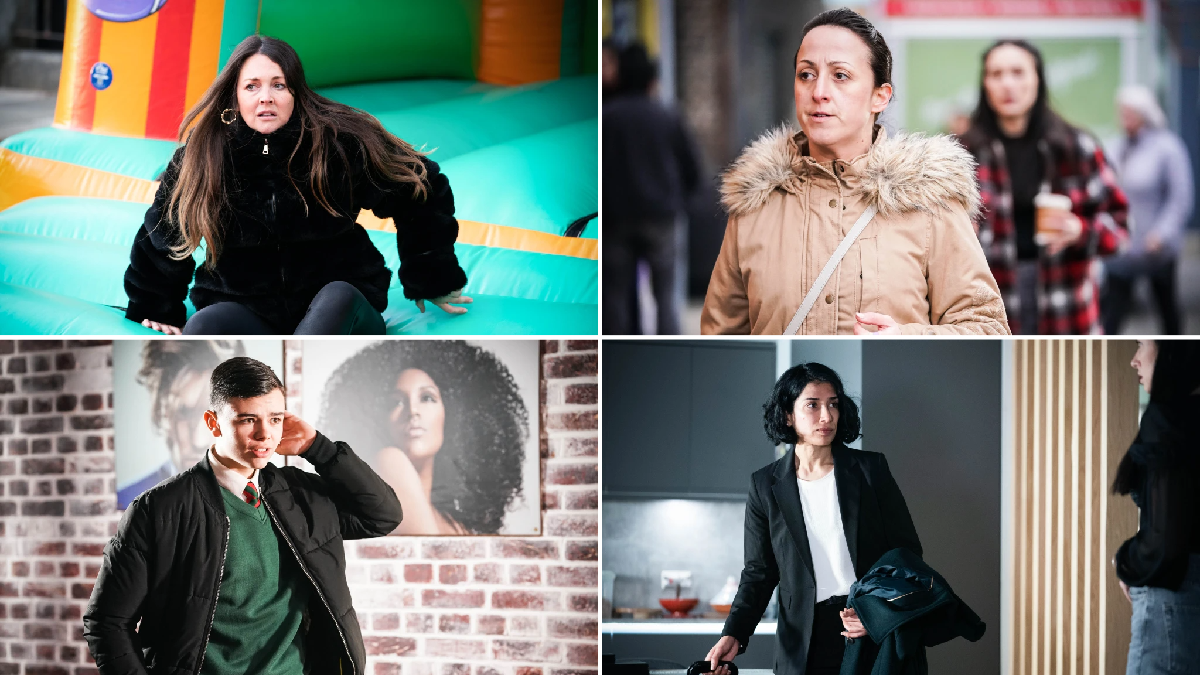 Stacey Slater (Lacey Turner) is left wondering what to do as the behaviour of her mum Jean (Gillian Wright) gives her cause for concern in EastEnders.

With Jean in a manic episode, Stacey is taken aback when things escalate – and the situation worsens when Jean decides to tell the kids how Kush died.

Elsewhere, Kat (Jessie Wallace) tries to support bullied Tommy but as the situation gets more dangerous for him, he takes drastic action.

But what has he done?

Stacey is concerned about Jean’s behaviour. Jean reveals a surprise for the kids as she has purchased a bouncy castle for them, but has blocked the market with it. Things get out of hand when Jean uses the bouncy castle herself, embarrassing herself and accidentally hurting Arthur.

When Harvey joins Jean on the bouncy castle, Stacey gets annoyed as he doesn’t seem to understand Jean’s condition. Stacey warns Jean that she can’t be alone with the children until she sees a doctor.

Kat is shocked by a new discovery. Tommy is surprised to find Kat crying in the kitchen.

As Sharon is going away with Albie, Jada’s friends have sent out an invite for a massive party at her place. Jada tries to make sure the house will be empty by getting Zack and Martin to go out tomorrow.

Jean tries to downplay Stacey’s concerns, telling Kat that she’s capable of looking after the kids on her own. She soon slips out to the tube station and tells Arthur the truth about Kush’s death – something that Stacey had deliberately kept from him.

Stacey is devastated when she realises that Jean has told Arthur about Kush. After an argument, Jean comes to see Harvey and Rocky – announcing that she’s moving in with them as Stacey is dead to her.

Suki isn’t happy when she finds out that Kheerat is planning to plead guilty over the Gray incident. Dotty uses some money from Sonia and approaches Eve for legal advice about Kheerat’s case.

Jada’s friends – including Will – arrive at Sharon’s place for the party. However, the girls are confused about why nobody else has turned up. Sonia interrupts the party and takes Will home. Zack is disappointed over Jada’s deception and warns that he plans to tell Sharon.

Stacey tries to convince Harvey that Jean may be experiencing a manic episode.

Harvey visits the prison and is shocked by Aaron’s injuries. He wants to speak to the officers about it, but Aaron urges him not to say anything.

Mitch and Karen have to comfort Mack and Mia after Arthur tells them that Gray killed Kush.

Isaac intervenes when the bullies taunt Tommy at school. While Kat waits for Phil’s package to be collected, Isaac arrives and tells her about the extent of the bullying. Kat decides to take action.

Tommy realises he has been set up by the bullies.

Stacey pretends to be Jean to get a doctor’s appointment.

Howie helps Kim to edit Pearl’s scholarship film, but soon realises that changes will need to be made to the OTT video.

Jada embarrasses Will when he arrives to see her with snacks and flowers.

Suki anxiously waits for news on Kheerat’s hearing, while Rocky decides it’s time to check in on Dotty.