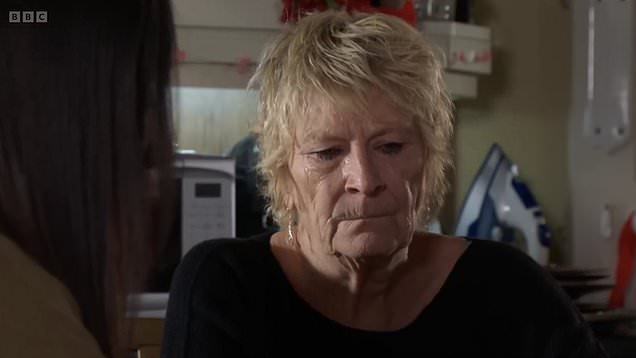 Residents such as Jean (Gillian Wright) and Denise (Diane Parish) weren’t the only ones sad to see her go, as fans took to Twitter to express their disappointment.

Another Shirley Carter lover (aren’t we all) said: ‘Shirley left EastEnders? The apocalypse is near’.

While Mick’s death hasn’t been confirmed, due to the weather conditions and the fact he was out in the icy water for so long, the Carter family are trying to come to terms with the fact he has most probably died.

Shirl’s emotional exit scenes left many fans in tears, praising the actress for her performance.

I don’t know how I’m supposed to cope without weekly sightings of Shirley Carter but at least she took Lady Di with her for company. Hurry back, Shirley. Linda Henry is a phenomenonal actress #eastenders #shirleycarter #ladydi pic.twitter.com/0MKzVolaeh

One particularly poignant scene saw Shirley say her goodbyes to friend Jean, who was already suffering with loneliness over the festive period.

Shirl is the third character to have exited in the past week, following the likes of Mick and Janine (Charlie Brooks).

Noooo! Not another character leaves! Theyâll be nobody left soon. #eastenders #shirley pic.twitter.com/OEtoWhmbUG

In a heart to heart with Denise, she confessed that the Square just didn’t feel like home for her anymore, with the loss of Tina (Luisa Bradshaw-White) and now Mick.

However, a spokesperson for EastEnders has confirmed that she will return.

Though it is still unclear how long she will be away from our screens, at least we have her return to look forward to.