Disney+ on Wednesday morning suped up its slate of Marvel fare by adding 20 total seasons of TV, including Netflix’s inaugural street-level hero series, Daredevil, and the five that followed it, plus ABC’s Agents of S.H.I.E.L.D.

Of course, the place that any of the series’ in “The Defenders Saga” (as aggregated in a new Disney+ row) or S.H.I.E.L.D. holds in the MCU has been the subject of debate for years and years. 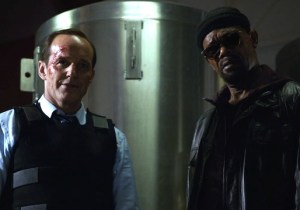 In what at the time was an impressive bit of synchrony, S.H.I.E.L.D. distinctly reflected the events of Captain America: Winter Soldier — in which S.H.I.E.L.D. was basically disbanded after a HYDRA takeover — with its 17th episode, “Turn, Turn Turn” (which premiered just days after the film’s release). Jaimie Alexander reprised her role as the Thor films’ Lady Sif just a few weeks before that, and Samuel L. Jackson popped up as Nick Fury a few weeks after, to task Clark Gregg’s Agent Phil Coulson (who famously died in The Avengers) with rebuilding S.H.I.E.L.D.

S.H.I.E.L.D. also referred to The Battle of New York (aka the Loki-led Chitauri invasion from the 2012 Avengers film), as did Daredevil (Wilson Fisk’s master Season 1 plan is born out of the destruction of Hell’s Kitchen) and Jessica Jones (where it was called “The Incident”).

The Avengers themselves have even been name-checked… sorta… such as when Jessica Jones characters referred to “the big green dude and his crew” and “the big green guy and the flag-waver.”

But again, these Marvel series’ tie to the MCU has mostly been at arm’s length (none of them ever referenced/incorporated Thanos’ Snap), and it has never been reciprocated — until, that is, Agent Carter‘s James D’Arcy, as (a differently cast) Howard Stark’s Jarvis, was spotted in Avengers: Endgame, and Charlie Cox’s Matt Murdock made a brief, crowd-pleasing cameo in Spider-Man: No Way Home (which exists in a special corner of the MCU, given the whole Sony-Marvel back-and-forth).

All of which is a way of recapping that Daredevil, S.H.I.E.L.D. et al have never been firmly folded into the MCU, though they have had their moments. And the No Way Home/Charlie Cox and Hawkeye/Vincent D’Onofrio castings have hinted at some sort of shift.

Do you agree with Disney+’s cordoning off of the  newly added Marvel series, or do some/all belong in at least one of the MCU groupings?