Derick Dillard is speaking out following a week full of revelations from himself and his wife, Jill Duggar.

The couple has spoken out about their rift with her parents, Jim Bob and Michelle Duggar. They did YouTube videos, and most recently, gave People an exclusive interview about their lives.

Did Derick Dillard and Jill Duggar profit from their recent interview?

On Instagram, a follower mentioned they were disappointed in Derick Dillard and Jill Duggar selling their story to people. He immediately responded and said they didn’t make any money from the People exclusive.

Of course, that didn’t sit right with some other followers. They didn’t believe he and his wife would pass up an opportunity for earnings. Derick responded to those claims as well.

He said, in part, “I wanted to set the record straight and remind people that things aren’t always as they seem.”

Both Derick Dillard and Jill Duggar were heavily scrutinized when they attempted to raise money for their mission work. The assumption was the couple was paid for their appearance on reality television with the Duggar family, but that was not the case.

This misconception is a big deal to Jill and Derick.

People have judged them on numerous occasions, and this is just another one of those instances. Derick maintains that they did not receive payment for their story, but there is no way to prove or disprove it. 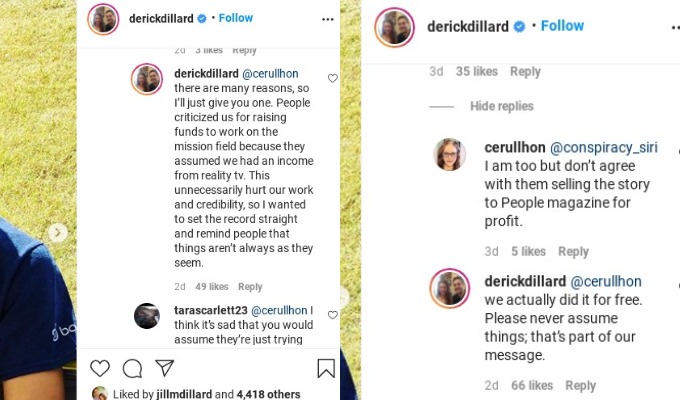 What have Derick Dillard and Jill Duggar said about their rift with the Duggars?

Over the last several weeks, Jill Duggar and Derick Dillard have participated in Q&A sessions on YouTube.

That is when the revelation about the rift between her and her parents was finally confirmed. It had been suspected for months, but this was the first time that Jill and Derick acknowledged it was true.

This was also the same time that Jim Bob and Michelle Duggar issued their statement confirming the strained relationship with Jill. They attempted to keep things under wraps, but now, there is no choice but to face it head-on.

Whether Derick Dillard and Jill Duggar profited from their story remains to be seen.

Typically an exclusive like that would be a big deal. Derick denies that money exchanged hands, but with his last year in law school playing out and a family to raise, it doesn’t add up to some followers.

Counting On is currently on hiatus.