David Letterman’s retirement gift to the late Regis Philbin could’ve taken a dangerous turn. During Wednesday’s episode of Jimmy Kimmel Live, Letterman recalled having Philbin as a guest on the Late Show With David Letterman the night before the TV personality retired from Live! With Regis and Kelly in 2011.

While brainstorming what to get Philbin in honor of his retirement, one person suggested a Rascal Scooter as “a joke about how old and feeble” he is, but Letterman had a better idea.

“I said, ‘No, no. Let’s don’t give Regis a Rascal Scooter. Let’s give him an actual scooter, like a Vespa. Everybody knows how to ride a motor scooter,'” Letterman remembered suggesting. “So that’s what we decided to do. [We said,] ‘Regis, we’re so excited. We’re sorry you’re retiring, but to commemorate the evening and your last show tomorrow, we’re giving you this beautiful, brand-new Vespa scooter.'”

The show had Philbin ride the scooter on-camera, outside of the studio. Right after a wave goodbye, though, Philbin tumbled off the Vespa.

Things ended up being just fine, as Letterman decided to take over the driving responsibilities and whisk Philbin away on the scooter himself. 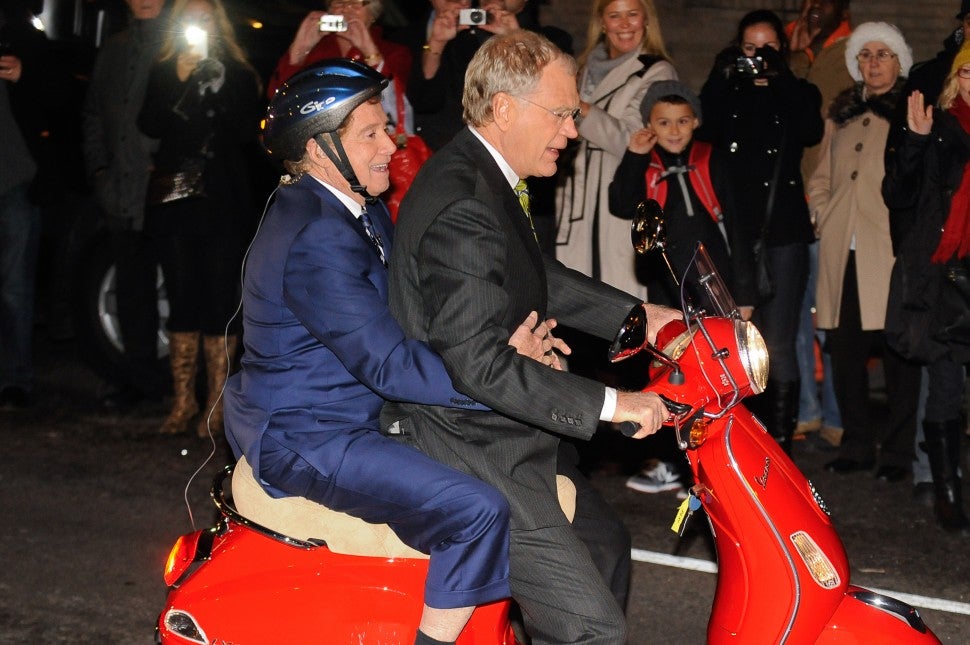 The Vespa story is just one of many with Philbin that Letterman looks back on fondly since his death from a heart attack in July..

“He never said no. He often would do things that we didn’t want him to do,” Letterman said. “He showed up once dressed as Shrek. I’m not sure he knew why, but there he was in his Shrek outfit. But I was unimpressed. I mean, there are guys in show business who need the costume to stay in business. Regis was not one of them.”

“He would do anything. He would come and be on the show and you could call him later and say, ‘Regis, your makeup was lousy. Can you come back? We’re going to do the whole show over.’ And he’d put on his suit and he would come back,” he added. “Tremendous individual… a great heart.”

To Letterman, Philbin also represented “the last connection to a show business that I grew up watching back in Indiana,” which also included the late comedians Don Rickles and Johnny Carson. Kimmel agreed, counting those men, along with Letterman, as some of his idols.

“When Regis left us, to me, it seemed like, ‘OK, that chapter is closed.’ That made me very sad,” Letterman said. “But I’m telling you, this guy, if somebody said, ‘Let’s pick somebody to drive across country with,’ if it couldn’t be Regis, then I would hitchhike.”

Watch the video below for more on Philbin’s legacy.