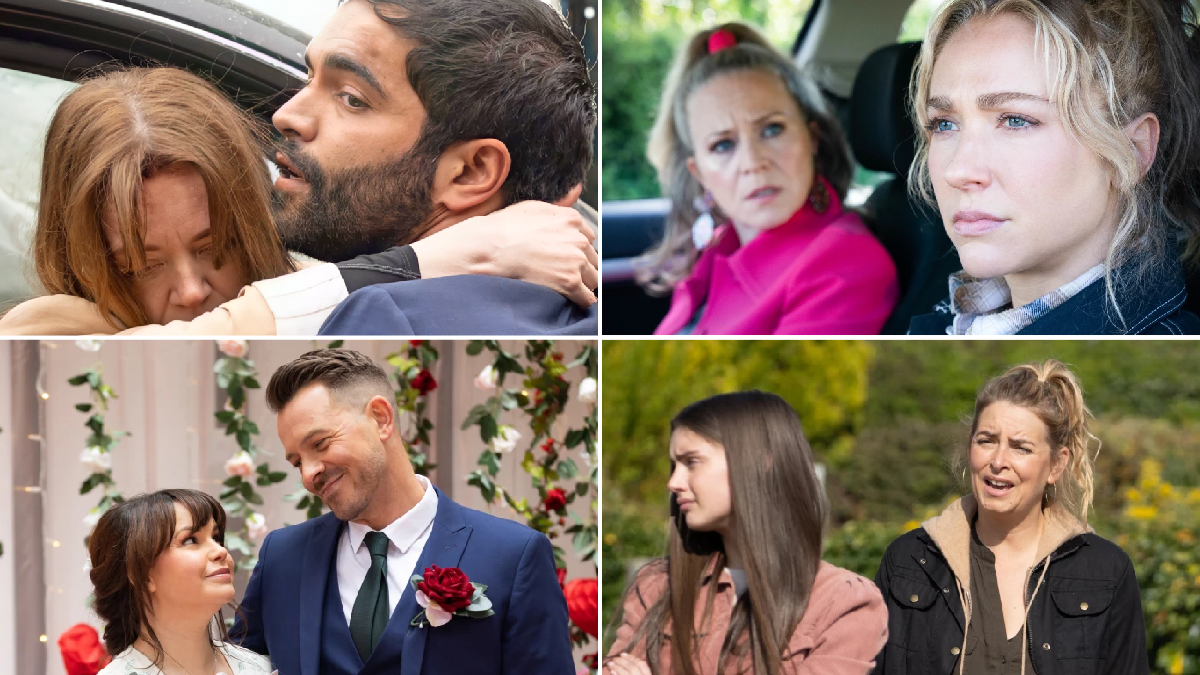 You’d better stock up on the tissues, as next week’s soaps are going to be bringing tears to your eyes, that much we can guarantee.

With the aftermath of a death sending shockwaves through the cobbles, Coronation Street is certainly not to be missed next week.

Mind you, the same could be said about EastEnders, as Linda Carter and Janine Butcher’s feud escalates once more, resulting in a dramatic and deadly car crash!

Perhaps the biggest tear-jerking development will be in Hollyoaks, however, as Luke Morgan dies while on his stag-do in Mallorca, while Nancy Osbourne gives birth to Darren’s baby.

Ahead of all the drama, Metro.co.uk is bringing you all the spoilers you could possibly need.

1. The residents of the eponymous street reel in the aftermath of the car crash, while Alfie’s future is increasingly uncertain in the wake of recent events.

2. Suspicions mount about the circumstances surrounding the car crash and, later, the police investigate. But just what, if anything, will they find out?

3. Summer attends her final exam, and she unzips her blood sugar testing kit to reveal Aadi’s revision cards hidden inside. The invigilator heads over, and thus she panics, claiming that she needs to test her sugar levels. The invigilator, however, finds the revision notes and recognises the handwriting as Aadi’s! Summer subsequently heads off, but she overhears Mrs Crawshaw tearing a strip off Aadi – for cheating!

4. Daisy and Jenny sample Leo’s homebrew, but they discover that it’s horrible. When Leo asserts that he’s looking forward to the beer tasting, Daisy and Jenny look awkward. How will they break the news to him?

5. Max offers to help school friend Sonya with her media studies homework. After a few messages, Sonya agrees to a date. Max grins at his screen, while David and Shona watch on, amused.

6. David and Maria are horrified to realise they’ve both booked the day off and there’s nobody looking after the barbers.

7. Eileen mistakes Frank for an ex-prisoner selling door to door when he calls at No.11, but Sean fills her in, revealing that Frank’s his new boyfriend. Eileen’s mortified. In the Rovers, Sean introduces Frank to George – but George becomes flustered, recognising Frank from school!

8. Linda sets off on a trip with Nancy, determined to tell her the truth about Janine’s scheming. Nancy, however, questions her mum about why she was going to leave several weeks ago, resulting in a colossal row. Nancy storms off, leaving Linda and baby Annie stranded by the side of the road. Linda turns to drink.

9. Janine is on tenterhooks, fearful that Nancy will find out the truth, but her attention is soon elsewhere, as she intercepts a call Linda makes to Mick, and sets off to retrieve the landlady. A showdown ensues between the love rivals, but as Janine drives Linda home, she loses control of the car and a devastating crash ensues!

10. Ben hits rock bottom, and after Kheerat relays his worries about him to her, Kathy confronts her son. She puts the blame on him for what transpired with Callum. This proves to be too much for Ben and, as emotions run high, the penny finally drops for Kathy, as she realises that Lewis raped her son.

11. Lewis speaks to Callum about being involved in a homophobic attack. The copper advises Lewis to report the crime. Lewis, meanwhile, continues to lean on Callum for support, asking him for help in regards to how exactly he should report the attack, taking advantage of his good nature.

12. Howie shows up in the Square, and soon finds himself chatting to Martin. Kim is surprised to see him, but an accident soon ensues, with Howie tripping over Kim’s bag! Kim wastes little time in saving the day, as she rushes her pal to A&E. Howie doesn’t want her help, but Kim refuses to take no for an answer, insisting that he move in with her while he recovers.

13. Peter returns to work at Walford East, but let’s just say that his first day back doesn’t go all that smoothly. Dana witnesses his struggles, and suggests that she be re-employed at the restaurant so that she can assist him.

15. Leyla’s jittery behaviour catches Liam’s attention. Suzy, meanwhile, find coke in her bag and berates her, reminding her of the dangers of buying drugs from an unknown dealer. Leyla’s left alone with the cocaine and, determined to make a change, Leyla washes the rest of it down the sink. When a buzzing Jacob arrives at Tenants eager to talk university, a ropey Leyla tries to act normal. She doesn’t fool Liam, however, who’s increasingly convinced she’s suffering from PTSD!

16. Noah sets off for court, looking lost and alone, much to Charity’s horror. Charity arrives in the court and, seeing Noah’s reaction to her arrival, she instantly regrets coming. As the sentencing commences, the group anxiously await Noah’s fate.

17. Sarah is angry with Charity when she realises that she is too distracted by Noah and resolves to leave the village for good. Faith, meanwhile, catches Sarah trying to hide her suitcase and messages Charity. Can broken Charity convince her to stay?

18. Will is stunned when Mike tells him that a man fitting Jamie’s description was spotted near Hazel’s house. Mike suggests a DNA test, and Will later tells him that he’s got Thomas’ hair. Will’s shocked, however, when Mike demands three grand for the DNA results. Despite his concerns, Will transfers £3,000 from the company accounts to pay Mike. How will Kim react when she finds the haulage company’s accounts open on his laptop?

19. Ryan agrees to Marcus moving in with Ethan and the happy pair head off for celebratory drinks with Charles.

20. Amelia suddenly collapses, the group gathers around her in fear. Amelia tries to convince the gang that she’s okay, claiming not to have eaten that day.

21. Darren and Nancy’s wedding date arrives, and the bride and groom-to-be are keen to keep their impending nuptials a secret. Luke, however, has other ideas, as he reveals his major surprise for the happy couple! In romantic scenes, Darren and Nancy get wed, as the one and only Chesney Hawkes serenades them!

22. Upon arriving in Mallorca, the hen-party kick back for a day at the spa, while the stag-do gang explore the island and all it has to offer. Things, however, get off to a bit of a rocky start for the lads, as they discover the boat that they’ve hired is a far cry from the one they were expecting, but a kind stranger by the name of Alex saves the day, showing them a good time!

23. The rest of the holiday is filled with touching moments of warmth, love and reflection, not to mention many highs and lows. But as the sun sets on the Mallorca backdrop, tragedy strikes, setting the scene for the final chapter of Luke’s tale. His loved ones wait by his bedside, desperately hoping for good news, but Cindy receives word from the doctors that there is nothing more they can do for Luke.

24. Nancy summons Felix to discuss DeMarcus and Charlie’s actions, but a series of unfortunate events soon ensue, resulting in the two ending up locked in a classroom! Nancy’s waters break, and both she and Felix come to realise just how inexperienced they are with birthing. Touching upon uncomfortable memories, they ultimately come together and support one another, delivering the baby.

25. Eric encourages Charlie to be cruel to Leah.