Coronation Street legend Martin Hancock, who plays Geoffrey David Nugent, AKA Spider, announced back in May he would be returning to the ITV soap after 25 years. The eco-enthusiast was married to Toyah Battersby (Georgia Taylor) and is the nephew of legendary character Emily Bishop (Eileen Derbyshire).

Martin recently opened up about his return to the cobbles and admitted that it was “scary” to step back into the character.

Speaking exclusively to Express.co.uk and other press, Martin revealed: “I suppose that a really sensible response is really exciting and a little bit scary.

Martin went on to explain he was “extremely nervous” to start filming after being away from the cast and set for such a long time.

“I did have sleepless nights, and I was very, very nervous. And then, my first day back before we actually started filming, I came in for orientation because obviously, it’s a new studio from the one that I was at. 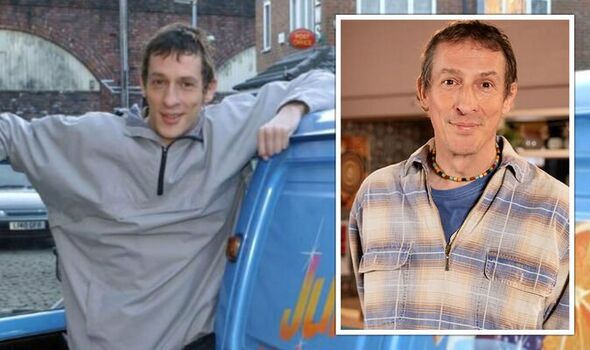 “And the first person I bumped into was one of the old ADs (assistant director) from the old days, and she was the first AD I ever worked with, which is Dale.

“Then the first members of the cast I saw were Georgia and Jane (Danson), and that was just like, yes!

“It’s brilliant. It was just like a huge warm blanket of love thrown over me. It was lovely.”

Teasing what’s in store for Spider, he said: “Toyah’s got this protest with the council and the whole recycling thing and not meeting up to their responsibilities.

“She puts a call out into the activist community, and Spider answers the call, except, of course, actually, I think he was already up doing a protest.

“He happened to hear about it and came by, but basically, she put the call out, and Spider answered.”

Spider is set to return next week as official spoilers reveal Leanne Battersby (Jane Danson) intends to repay her the money for her legal bills, and Toyah returns to work at Underworld.

But with Toyah snapping at customers on the phone, Jo Lafoe (Marnie Baxter) warns Sarah Platt (Tina O’Brien) that employing someone charged with murder isn’t a good look.

Trying to distract herself from her troubles and Leanne’s lack of faith in her, Toyah mounts a protest against waste incineration.

Leanne refuses to back off and insists she wants to help, so Toyah invites her to join the protest.

Toyah leaps into the cab of the bin wagon, much to Leanne’s dismay, whilst a man picks his way through the protest group and clambers into the cab next to her.

Turning to see who the strange man is, Toyah’s gobsmacked to see it’s her ex-boyfriend, Spider Nugent.

As the pair catch up and reminisce, Toyah breaks down about Imran Habeeb’s (Charlie De Melo) death.

She invites Spider to stay over. Could this be the beginning of a romantic reunion between the pair?