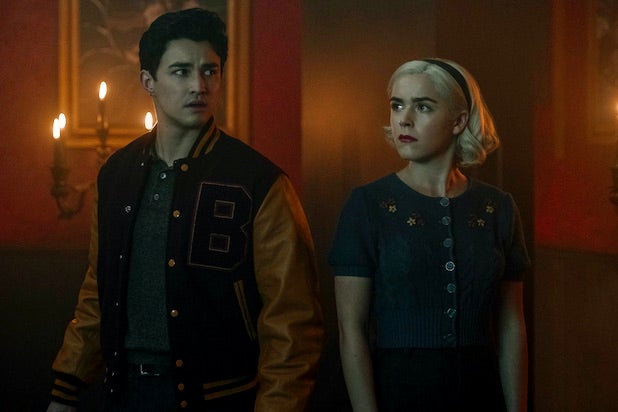 (Warning: This post contains spoilers through the series finale of “Chilling Adventures of Sabrina.”)

“Chilling Adventures of Sabrina” came to an end with the launch of its fourth and final season Thursday, an installment that closed with the death of Sabrina Spellman (Kiernan Shipka) and the more unexpected death of her boyfriend, Nick Scratch (played by Gavin Leatherwood).

And while the teenage witch dies a most heroic death, saving her friends and family — not to mention the world — from the Eldritch Terror known as The Void, Nick dies because he goes swimming in the Sea of Sorrows following Sabrina’s passing. Nick’s death at his own hand to join Sabrina in the afterlife is sure to be a final scene that hits fans in the feels, realizing Nick committed suicide to be with his love.

“I do think that it’s a tragic end. It’s heartbreaking, it’s absolutely heartbreaking. I don’t think that there is a way around it,” Shipka told TheWrap. “Obviously, Nick’s love was the driving factor in his decision and it’s complicated and it’s messy and his intentions for doing it were probably mainly love motivated and also ‘Maybe I can figure out a way to bring her back to planet Earth’-motivated. I think at the end of the day, Nick’s power is so strong that he probably believes that he could somehow get back to Greendale if he really wanted to. But there’s no way around the fact that it’s a huge bummer and it’s sad. But it’s also, they’re together at the end of it.”

Netflix revealed in July that “Chilling Adventures of Sabrina’s” upcoming fourth season, which had wrapped filming in February, would be it’s final. Shipka says the cast and creator Roberto Aguirre-Sacasa went into Part 4 knowing that it could be the end, as it turned out to be, and prepared by filming what she believes to be a “true” ending for the series.

“I think that going into the last season, we knew that there was a possibility that it could be the last season, we just didn’t know if it was going to be or not,” she said. “But I’m so happy that we shot it with it being a true series finale in mind. I definitely think that there is sort of an alternate editing version if we kept going. But to actually have true closure and have that be the final shot was really … I think that was known, at least from my perspective. I was like, ‘Yeah, this is the last shot.’ And I’m happy we wrapped it up the way we did. I would obviously love to revisit it at some point, however that may come about. But I think we really solidified that. The story came to a close.”

The series finale of “Chilling Adventures Sabrina” put nails in the coffins of Sabrina (Spellman and Morningstar) and Nick, and also laid to rest the Harvey (Ross Lynch) vs. Nick debate. And Shipka definitely thinks Nick and Sabrina ending up together was the right way to go.

“I think that there is something so special about Harvey because he’s Sabrina’s first love and I don’t think they will ever not love each other,” Shipka says. “But I think the second that Nick walked in, people knew that Sabrina and Nick were it. I mean, they were just sort of made for each other. And as the Harvey and Rosalind (Jaz Sinclair) relationship sort of blossomed into something so beautiful, I would hate to see that tarnished. So I’m really happy with where that ended up. I think that at the end of the day, it was my gut instinct, and I’m pretty sure that it’s other people’s as well, that Sabrina and Nick are — as Nick so eloquently said, ‘endgame.’ I think that they’re perfect for each other, I really do.”

Check back with TheWrap for more of our coverage of the final season of “Chilling Adventures of Sabrina.”