Ratings: ‘The Voice’ Pulls Ahead of ‘American Idol’ on Night of National Championship Game

After weeks of incremental growth, “Godzilla vs. Kong” provided a big leap in the recovery process for the domestic box office. In Canada, however, theaters are still closed in approximately 75% of the country, making the country the next big challenge in the struggle to return to normalcy.

The $48.5 million 5-day opening of Warner Bros/Legendary’s “Godzilla vs. Kong” was fueled by the widest release for a film since the start of the pandemic at 3,064 theaters, compared to 2,860 for Warner Bros.’ “Tenet” back in September. But by comparison, the film’s 2019 predecessor, “Godzilla: King of the Monsters,” opened in 4,108 locations.

That approximately 1,000-theater difference isn’t entirely attributable to Canada. All of the top U.S. markets are still in the process of reopening theaters, including Los Angeles, where chains like Arclight and Laemmle still remain shuttered. But Jeff Goldstein, president of domestic distribution at Warner Bros., explained that unlike Canada, there’s basically no part of the country where an American moviegoer can’t find at least one theater that’s open now, thanks in good part to the nationwide reopening of the country’s three largest chains: AMC, Cinemark and Regal. 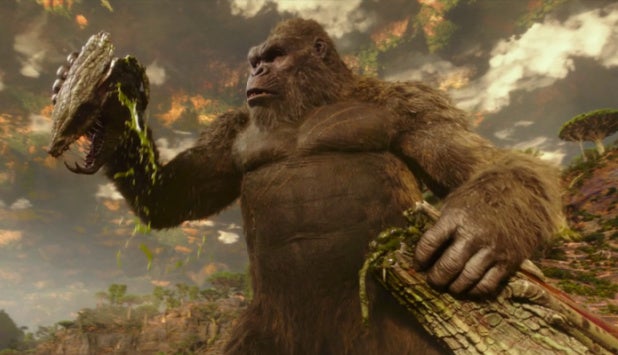 “We still don’t know how many theaters still have to reopen because we don’t know how many theaters will never reopen,” Goldstein said. “But in L.A., for example, the Arclight Hollywood is closed, but a mile west, the Chinese Theatre is open. So we estimate that around 99% of markets are open again, even though the number of theaters that have reopened is about 55% of what it was before the pandemic.”

However, several provinces in Canada still have their theaters closed as the country grapples with the spread of the B117 variant of COVID-19, which originated in Britain and is believed to be responsible for the surge in daily cases over the past month from 2,808 on March 1 to 5,808 on April 1, the highest count since mid-January. In response to the surge, officials in Ontario, Quebec and British Columbia have issued new lockdown orders forcing the closure of theaters, gyms and some other businesses, though stopping short of a stay-at-home order.

Thanks to new closure orders, the number of Canadian theaters that had reopened fell from 532 to weekends ago to 142 this weekend, according to Comscore. By comparison, 2,842 U.S. theaters are currently open, compared to just under 5,000 in early April 2019. The U.S. is on track to keep that number rising, but the closure orders in Canada are expected to stall reopening efforts at least through April.

Distribution executives told TheWrap there’s hope that the new surge will subside by mid-May, but films that try to release this month must work around the closures. “Godzilla vs. Kong” did this by taking the hybrid route used by “Raya and the Last Dragon,” releasing in both theaters where available and on premium on-demand across Canada. Warner Bros. reported that “Godzilla vs. Kong” earned $3 million in Canadian PVOD sales.

But the new Canadian shutdown could be a warning sign for reopened American theaters if the B117 variant spreads nationwide. Already, epidemiologists are warning that a fourth wave of infections has begun in the U.S., with new outbreaks reported in Michigan, New England, and the tristate area around New York City. Variant cases are also rising in Florida, where experts are worried that out-of-control crowds gathered for spring break could create a super-spreader event as they travel back home.

“We’re heading into the fourth surge. Cases are increasing. Variants are increasing. Variants are more deadly,” former CDC director Dr. Tom Frieden told “Good Morning America” on Saturday. “We just have to hang on until a larger proportion — particularly of the vulnerable — are well vaccinated and more of us are vaccinated, or we will have a large fourth surge. We will have a fourth surge, I’m afraid. How large and deadly? That depends on us.”

For now, there have been no orders to close theaters or other businesses in new COVID hotspots. In California, infection rates have dropped so low that theaters in Los Angeles and San Francisco have been permitted to raise their capacity limits from 25% to 50% — a big step for the venues to achieve profitability.

But even if U.S. governors continue to choose to reopen the economy, there’s still the chance that variant spreads could delay efforts in the U.S. and Canada to raise capacity limits nationwide. “Godzilla vs. Kong” posted by far the strongest domestic opening weekend since the pandemic started — more than double the $16.7 million earned by “Wonder Woman 1984” from its opening on Christmas Day when several major markets were still shut down. But the hard limit on how many tickets theaters could sell for each screening of the MonsterVerse film put a ceiling on revenues.

“‘Godzilla vs. Kong’ did a great job showing how much closer we’ve gotten back to normal and how there’s still great interest in seeing the biggest movies in theaters,” Comscore analyst Paul Dergarabedian said. “But it also showed how it’s going to take a lot of time to get theaters back to full capacity and why so many studios have been delaying releasing their biggest tentpoles.”