In modern movie terminology, “epic” usually just means long, crowded and grandiose. “Birds of Passage,” Cristina Gallego and Ciro Guerra’s follow-up to their astonishing, hallucinatory, Oscar-nominated “Embrace of the Serpent,” earns the label in a more honest and rigorous manner. Parts of the story are narrated by a blind singer — a literally Homeric figure — and the story itself upholds Ezra Pound’s definition of the epic as “a poem containing history.” It’s about how the world changes, about how individual actions and the forces of fate work in concert to bring glory and ruin to a hero and his family.

The history in question, divided into five chapters, involves the Colombian drug trade from the late 1960s to the early 1980s, but the film defies narco-drama clichés and superficial period atmosphere. Set among the Wayuu of northern Colombia (an Indigenous population whose language and customs survived the Spanish conquest and the rise of the modern nation-state), it also resists the temptations of exoticism and hazy magic realism. Even as you may be reminded of other sweeping chronicles of fortunes made and souls undone by ambition and greed — “Giant,” “The Godfather,” even “Breaking Bad” — your perception of the world is likely to be permanently altered. The experience made me think of some of my favorite movies (I’ll add Visconti’s “La Terra Trema” to the list), but it’s also like nothing I’ve ever seen before.

Not only because of the cultural and geographic milieu, which may be as unfamiliar to many Colombians as it will be to most North American viewers. The landscape the Wayuu inhabit, on a peninsula jutting into the Caribbean, includes patches of desert and lush, green hillsides. Mostly ranchers and farmers, the Wayuu conduct trade and manage potential conflict through a system based on ritualized exchange and communication. A family’s honor is bound up with its word, and certain members, designated “messengers of the word” are treated with special deference. “Don’t shoot the messenger” is close to a sacred principle.

Over the years, that and other, equally venerable rules will be broken, a slow unwinding of the old ways that escalates into full-scale slaughter and chaos. It all begins innocuously enough, with the courtship of Zaida (Natalia Reyes) — whose coming-of-age ceremony starts the film in a swirl of color, music and celebration — by a young man named Raphayet (Jose Acosta). He is a bit of a prodigal son figure, returning home after seeing some of the non-Wayuu world. Zaida’s mother, Úrsula (Carmiña Martínez), the matriarch of their clan, regards him with frank suspicion. Raphayet has spent time among the alijuna (as the Wayuu refer to Spanish-speaking Colombians), and she wonders if he has been corrupted by their ways. 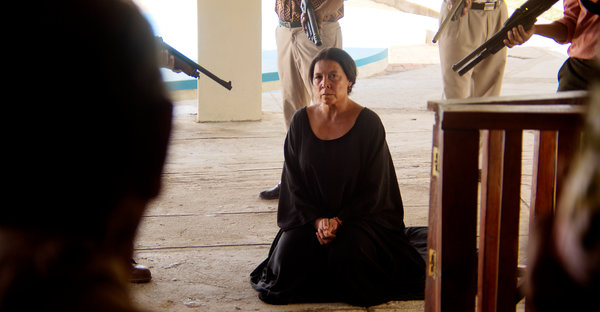 She turns out to be right, but it’s also true that Zaida’s suitor is an enterprising and attractive prospect. In a hurry to acquire the livestock and jewelry that Úrsula demands as the price of her daughter’s hand, Raphayet and his alijuna partner, Moisés a.k.a. Moncho (Jhon Narváez), start trafficking in marijuana. The opportunity arises by accident, a moment of serendipity and a portent of future trouble. Moncho and Raphayet, who have been hauling sacks of coffee beans in a battered truck, meet some American Peace Corps volunteers looking for weed. They know another gringo with access to planes and an airstrip, and Raphayet persuades Aníbal (Juan Martínez), Úrsula’s cousin and a patriarch in his own right, to devote some of his fields and manpower to the new cash crop.

What could go wrong? Everything, of course. In Gallego and Guerra’s hands, a tale of shady deals, double-crosses and miscalculations becomes a domestic tragedy and a cultural apocalypse. As the money flows in, so do the guns, and the old codes of honor and reciprocity are corroded by acquisitiveness and vanity. Raphayet, Zaida and their two children move into a grand stucco villa that comes to symbolize both their worldly success and its grotesque absurdity. The house sits in the middle of a barren stretch of land, looking desolate and abandoned even when it’s newly built and full of people.

The opulent, sterile rooms are visited by some of the birds alluded to in the film’s title, omens of change and catastrophe. “Birds of Passage,” while clearly the result of long and careful research into the Wayuu, doesn’t feel like an ethnographic document. Instead of stepping back to explain the beliefs and practices of its main characters, it plunges you into the reality of their lives, trusting that both their humanity and their distinctiveness will be apparent, that they are no more inherently mysterious — or inherently noble — than anyone else.

This unassuming empathy — the refusal of the filmmakers to stamp their subjects with otherness — makes the losses the characters endure all the more devastating. The ease and charisma of the performers, trained and nonprofessional actors alike, heighten the emotional impact. Acosta, as handsome and dashing as Douglas Fairbanks, also has a sadness about him, and a diffidence that suggests a man unsure of his own powers.

Though their marriage is at the center of the narrative, Zaida and Raphayet are not quite the protagonists of their own lives. The authentically tragic figure here, the one who secures the film’s epic scale and timeless gravity, is Úrsula, whom Carmiña Martínez plays with heartbreaking authority. Regal in her bearing and steadfast in her commitment to being right, she resembles a queen in an ancient Greek play, a woman whose actions are at once grounded in clear ethical principles and utterly catastrophic in their consequences.

Not that Úrsula is entirely to blame for the violence that consumes nearly everyone around her. There are plenty of individual lapses that accelerate the destruction. Moncho is impulsive; Raphayet can be passive; a boy named Leonidas (Greider Meza) drifts toward wanton criminality, untethered from the discipline of tradition. Behind these actions are the half-invisible, lethally powerful forces of alijuna expediency and Yankee appetite. The history this poem contains is not only the history of the Wayuu.