Big Ed uploaded a picture of himself as his mother worked on his hair. His mom wore gloves as she handled Big Ed’s hair. She is shown holding a comb as she separates his hair.

Fans have taken to the comments section to show their love for Big Ed’s mom.

“You have a great mama,” one fan commented.

“I love your mom @thisisbiged . She’s so sweet!!” another exclaimed.

“obsessed with your perfect mom,” a third fan wrote. 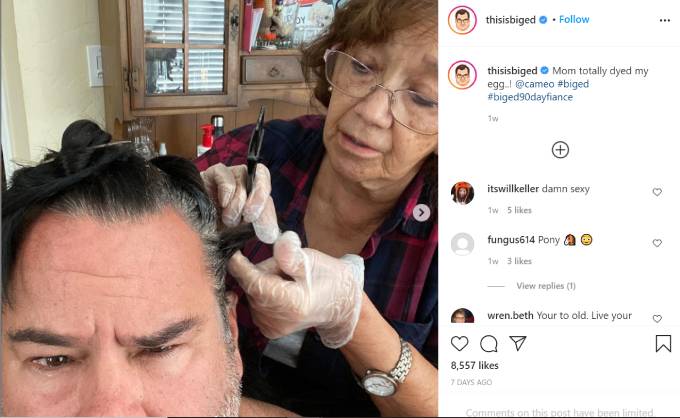 One fan referenced how Big Ed used mayonnaise on his hair.

“Yesss, you don’t have to use mayonnaise anymore,” one fan joked.

Big Ed revealed during his time on 90 Day Fiance that he used mayonnaise when he dyed his hair because he claimed it made it smoother.

“I have been dyeing my hair and it irritates my scalp. I found out that mayonnaise makes it smoother and less dry,” he said on the show at the time. “I am self-conscious about my physical appearance, because Rose is 31 years younger than me. I smell like an egg salad sandwich, but it really, really works.”

Other fans think that he should go with a more natural look as opposed to dying his hair.

“You should leave the salt n pepper look. I think it works look great!!!!!” one fan exclaimed.

“Why do you dye your hair. Such an outdated thing to do. Stay grey,” another fan added.

90 Day Fiance star David also joined in to share his own hair secrets.

“Annie colors mine for me,” David revealed.

David and Annie Suwan are one of the franchise’s most beloved couples. The couple was featured on Season 5 and is still together.

They often appear on Pillow Talk to give their feedback on the current seasons and have even weighed in on Big Ed and his former girlfriend Rosemarie Vega.

Since appearing on 90 Day Fiance, Ed Brown has used his nickname Big Ed to create a brand.

He created a merchandise line called Big Ed Wear with shirts, leggings, and shoes that feature his signature sweat stain design. He also recently added bobbleheads of himself and his mom to the collection.

90 Day Fiance: Before the 90 Days is currently on hiatus at TLC.