During Sunday morning’s instalment, BBC Breakfast presenter Sally Nugent spoke with zookeeper Abigail Wiseman about how she and a racoon from the zoo have been video people from the animal park in Yorkshire throughout the coronavirus pandemic. Although it’s safe to say, the raccoon stole the show entirely.

Speaking from Mayfield Animal Park, Abigail tried to speak with Sally about what she has been doing at the zoo to sustain the business while they have been closed.

The manager has been virtually meeting people throughout lockdown, via the platform Zoom, with her sidekick Crear so that people can still feel like they are at the zoo.

Although, as Abigail was chatting away, Crear decided to do her own thing.

“She’s been with us since she was a baby,” Abigail began. 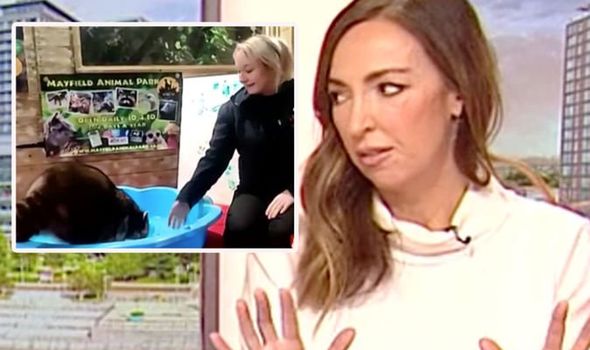 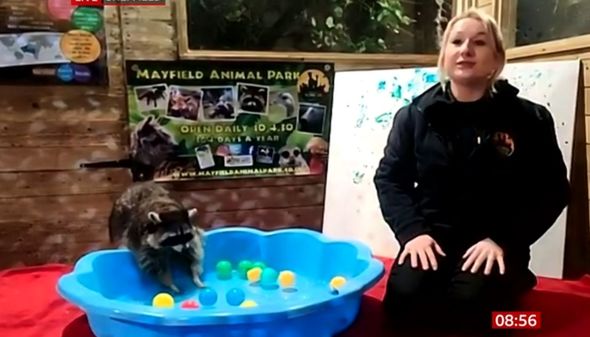 “We take on quite a lot of rescue animals, she has become one of the ones who has become quite well known here.”

Sally asked: “Now, tell me how did your Zooms with raccoons start?”

As Abigail splashed Crear with water, while she was playing in the paddling pool, the raccoon “went crazy” and stormed out of shot.

A shocked Sally continued: “Oh my goodness, is she alright?” 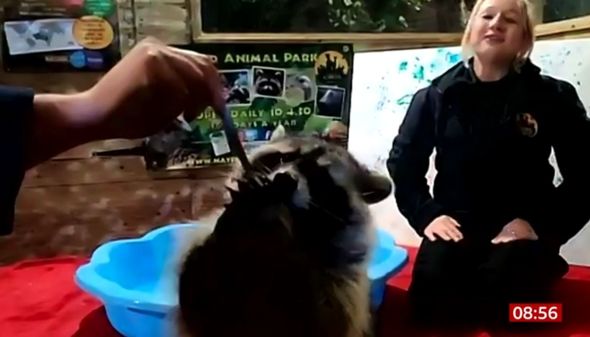 Abigail went on to explain that the Zoom meetings started with some children who were doing their school work from home.

However, when the word got out, it got even more people interested in taking part in the Zoom calls with Crear.

“It kind of took off from there and it’s been a godsend, I’m not going to lie,” Abigail told Sally.

She added: “Lots of places have been suffering during lockdown and zoos, in particular, have really suffered.

“I think unlike a lot of businesses, they have completely shut down but at a zoo, we need to be here to look after the animals, buy the food, so it has been really difficult for us.

“As you have probably seen like a lot of other zoos, they are trying to find crazy ways to keep a little bit of income coming in.

“Luckily we had this beautiful star to come in doing a little bit of craziness for us and entertaining you lot.”

Sally asked Abigail about Crear’s personality as she pointed out: “She seems a bit shy.”

“She’s like a playful toddler, she wants to be involved in everything and she has the mental capacity of a three to four-year-old child, so everything around her is entertaining.”

Trying to get her interested in the camera so Sally could see a close-up shot of the raccoon, Abigail’s colleague dangled a treat right in front of the camera and Crear went straight to it without hesitation.