A BBC Breakfast interview was forced to abruptly end after it was interrupted by a man holding a sign that read ‘Anti-British BBC’.

The presenter appeared live from Smithfield Market in Manchester to chat to some sellers about the news and how they would be impacted.

Mid-interview a man stepped into shot with the handwritten sign and began shouting about being ‘deceived’.

Nina tried to move the conversation away from the gatecrasher to ‘talk about this later’ but he moved along with them and continued to talk.

The interview was swiftly cut off and the programme returned to presenters Dan Walker and Louise Minchin in the studio. 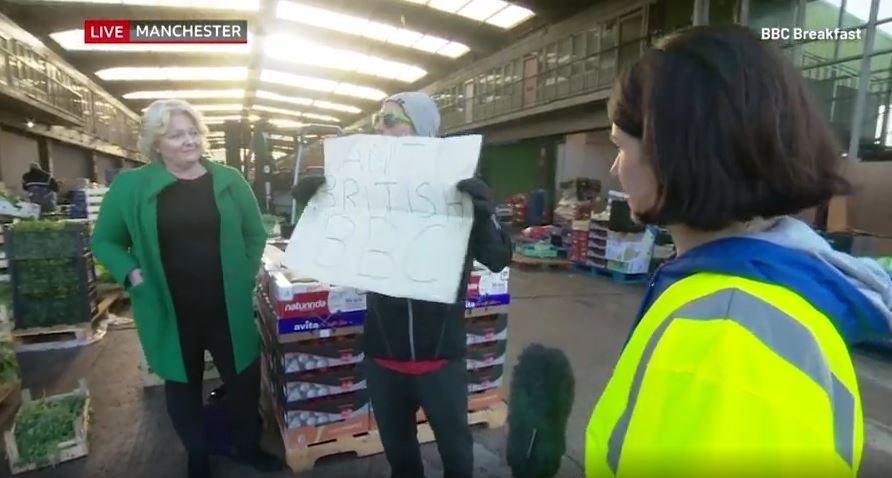 The two presenters handled the unexpected situation deftly and said they hoped to return to Nina later on in the programme.

Dan commented: ‘That’s a bit unfortunate, isn’t it, because we were relying on Nina to give us a bit of an insight into how the new inflation figures are gonna affect businesses and what sort of things we should be discussing this morning as well.’

Wednesday’s episode also marked the end of Louise’s time on the programme after 20 years.

The 52-year-old was given an emotional send off by co-star Dan Walker and Breakfast hosts and guests from years gone by.

At the end of the programme she said she was looking forward to not needing to wake up at 3.42am every day and being able to enjoy having breakfast with her family.

She first presented BBC Breakfast in 2001, and in late 2011, it was announced that she would replace Sian Williams as one of BBC Breakfast’s main presenters alongside Bill Turnbull and Charlie Stayt when the programme moved to Salford, with the first edition airing in April 2012.

She revealed on her last show that one project she will be taking on is a programme about the menopause, a topic she has spoken in depth about on Breakfast.

Breakfast airs weekdays from 6am on BBC One.