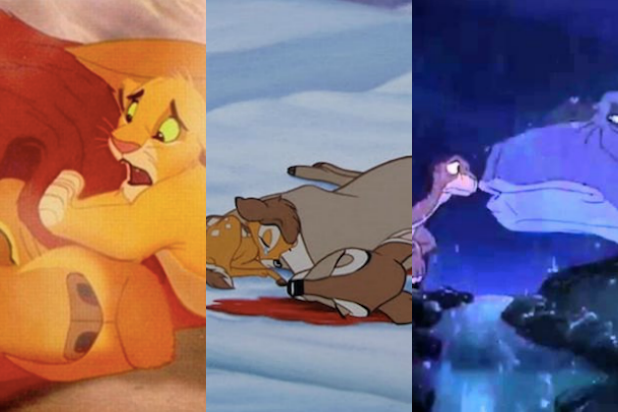 Very few movie scenes are more soul-crushing than the shocking demise of Bambi’s mother. Here are 13 of the saddest moments from children’s movies.

The Iron Giant’s noble sacrifice to save Hogarth and his town from a nuclear strike left kids despondent when they saw it in theaters, but we’re putting it at the bottom of our list because — 18-year spoiler alert — he comes back in the end.

Big props to little 5-year-old Levi Alexander for his performance in the opening scene of David Ellery’s tender, superior remake of a 1977 Disney dud. The cold opening shows a terrified young Pete lost in the forest after his parents are killed in a car crash, until he experiences the fantasy of every young boy: meeting a mystical dragon.

“I’ll…be…right…here.” Not many people — adults included — can get through “E.T.” without shedding a few tears. Even though no one dies in this tearful goodbye scene, we feel like a part of ourselves has as we watch ET and Elliott embrace for the last time.

It’s easy to forget that Woody, Buzz & Co. are toys, not people. As the toys lock hands and slip down into the fiery furnace, their despair is almost tangible, the panic in their eyes  scarily human. Luckily, the little green aliens swoop in and save everyone from toy-death.

At some point, Pixar realized the generation that had grown up watching their movies had come of age, and started making movies about looking back at childhood from an adult perspective. “Inside Out” was one of those films, as it turned an imaginary pink elephant into the source of many tears with a powerful commentary on how it’s OK to leave childhood things behind.

There are many deaths on this list, but only one involves a live-action horse suffering a tragic end. Yet “The Neverending Story” goes there, as the horse Artax is sucked beneath the muck in the Swamps of Sadness. And looking at that horse’s eyes, we can’t help but wonder just how terrified he really was on set.

Who knew a cash-grab movie designed to sell toys could be so poignant? The death of the Autobots’ leader was a ploy to push a new generation of Transformers to the fore in the hopes that kids would buy action figures of them. Instead, the backlash from kids was so intense that Hasbro brought Optimus Prime back in 1987. And then killed him off again. And then brought him back. And then killed him off again…

We could have made this entire list from scenes from “The Last Unicorn,” but we’ll restrain ourselves and go with the moment when Molly Grue, who spent her youth longing to meet a unicorn, finally gets her wish long after her maiden years have passed and life has beaten her into despair.

First, Littlefoot almost gets eaten by a T-rex. Then, he sees his friends perish in an earthquake. And then, he has to watch on as his mom slowly and painfully dies and somehow find his way back to the Great Valley on his own. Poor little guy!

Anyone who watches the scene of Carl’s courtship and marriage and doesn’t cry should see a doctor, because their tear ducts are obviously defective. “Up” captures the essence of Carl and Ellie’s relationship in less than five minutes. From their marriage to Carl’s devastation upon the death of the love of his life, their relationship is sweet but ultimately tragic.

When young Travis Coates (Tommy Kirk) learns that his beloved four-legged friend has rabies, he does what he has to do — with a shotgun blast that will send tears down your face without fail.

Right before he goes off to college, Andy has says goodbye to his favorite cowboy toy. This scene was particularly powerful for the generation that grew up watching “Toy Story,” because “Toy Story 3” came out when many were heading off to college, themselves.

The death of Bambi’s mom is often cited as one of the saddest movie moments of all time, and it’s easy to see why. That’s a lot of blood for an animated movie marketed to kids! According to this book, even Walt Disney’s daughter objected to Bambi’s mother dying. Who knew the plight of a cartoon deer could touch so many people?

Cue the sound of every ’90s kid’s heart breaking all over again. Even sadder than this lion king’s actual death is how his cub, Simba, tries to wake him up. Mufasa may have left us more than two decades ago, but it’s still. Too. Soon.