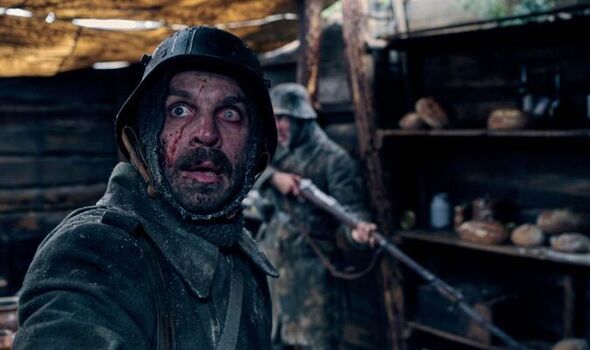 And perhaps this harrowing film couldn’t have arrived at a better time. Director Edward Berger says he was inspired by Brexit and Trump to make a movie that warns of the dangers of unthinking nationalism.

But events in Ukraine resonate more in this spectacular film about young lives sacrificed to the vanity of cowardly old men.

The film, which should win the modern equivalent of the Best Foreign Language Oscar, begins with a young German soldier almost surviving a deadly charge into No Man’s Land.

Then it follows his blood-stained uniform to a laundry and back to Germany where it’s passed to an enthusiastic new recruit Paul (an excellent Felix Kammerer).

The 17-year-old, who forges his father’s signature, is quickly packed off to northern France in 1917 where he discovers the war isn’t going quite so heroically as he’s been led to believe.

The grim battle scenes are less showy than those in Sam Mendes’s 1917, but even more devastating. A scene featuring allied tanks and flamethrowers could burn itself into your memory.

When we get to November 1918, the action in France is intercut with scenes of German politician Matthias Erzberger (Daniel Brühl) nervously preparing for armistice negotiations with the French.

Ezberger is desperate to stop the slaughter, but his bitter counterparts are more interested in revenge than a lasting peace.

And we all know what happened next.