The One Show: Alex tells Robbie Williams he’s ‘our favourite’

Robbie Williams arrived in The One Show studio this evening alongside fellow musician Jamie Cullum for a special performance. And word of Robbie’s appearance led to Alex Jones and Alex Scott hearing from members of the public about they thought of the former Take That singer. However, when one person said his old bandmate Howard Donald was their favourite member of the band, the BBC presenter dished out a cheeky swipe at the singer.

After hearing the member of the public’s opinion on Howard and Robbie, Alex stepped in.

“Well, Howard may be Michaela’s favourite,” she said. “He’ll always be ours, it’s Robbie Williams.”

The studio broke into applause at Robbie’s introduction before Alex continued: “Do you hear that a lot, Howard’s the favourite?

“I doubt it,” she remarked, which brought a straight-faced reaction from Robbie. 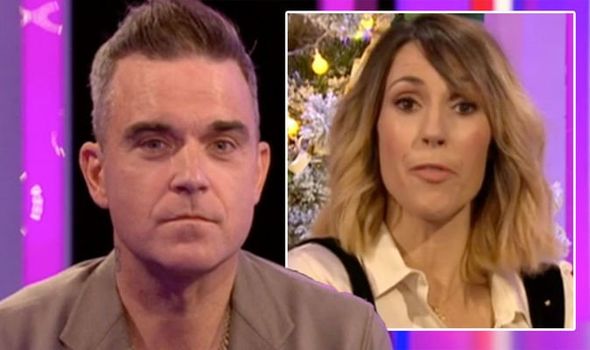 We will use your email address only for sending you newsletters. Please see our Privacy Notice for details of your data protection rights. Alex Jones left cringing at Strictly Come Dancing throwback

“No offence to Howard if you’re watching,” Alex backtracked as Robbie feigned he was insulted at The One Show host’s remarks.

He continued: “There he was on a Friday evening, stocking into his dinner and he got slighted on The One Show by you.”

“Stop it,” Alex interjected before the trio laughed off the incident.