Often, when actors or directors with Oscar contenders sit down opposite your Carpetbagger, I can sense the barely concealed anxiety underneath their brave faces. There are so many year-end movies jostling for award-season attention, and it’s possible that their passion projects could get lost in the scrum.

It was striking, then, when I recently met up with a relaxed and grinning John Krasinski, who’s treating the awards run of “A Quiet Place” as an unexpected victory lap. Krasinski directed and starred in the postapocalyptic horror movie about a family besieged by sound-seeking monsters, and since “A Quiet Place” was an out-of-the-gate hit last spring, “it’s nice to have the pressure off and have this be a celebration than for it to be an angsty, scary time,” Krasinski said.

[Read our review of “A Quiet Place.”]

In a year with many populist contenders in the mix, including “A Star is Born” and “Black Panther,” the team behind “A Quiet Place” now hopes to convert that box-office passion into award-season heat. So far, Krasinski’s wife and co-star in the film, Emily Blunt, has picked up a SAG nomination for her work, and the movie has scored top 10 mentions from organizations like the National Board of Review and American Film Institute. That means Krasinski, 39, has spent almost an entire year promoting his film, but he’s happy to overextend himself. “I do feel wiped,” he told me, “but it’s a whole different ballgame to be talking about something you love.”

Here are edited excerpts from our conversation:

Your first breakthrough was as an actor on “The Office,” which became a hit later into its run. By contrast, “A Quiet Place” was an overnight phenomenon. How did you experience that kind of success?

“The Office” was so gradual that there was time to process it, but with “A Quiet Place,” when you’re fired out of a cannon, you don’t really know you’re in the air until you’re almost on the way down. It’s changed my life completely. It felt like this was a story I had always wanted to tell, and I didn’t even know it was lacking in my life, so there was this satiation from it that I didn’t realize I needed. When I was walking my daughter to school for the first time after we premiered at South by Southwest, I felt like, “You’re getting your full dad for the first time.”

We were driving there, and my wife said: “What do you want to worry about? Focus on one thing, because if you worry about the whole movie, you’ll drive yourself crazy.” I remembered [George] Clooney told me that they clapped at the end of [the drama he directed] “Good Night and Good Luck,” so I said, “It’d be cool if they clapped.” Of course, I chose the end of the movie, which was stupid. She said: “O.K., just focus on that. Don’t worry about what the audience does until that moment.”

When Emily cocked the gun at the end of the movie, they exploded. They jumped out of their seats, they were shaking the chairs. I remember that so clearly because Emily turned to me and screamed, “Oh my God!” And very apropos, I couldn’t hear because everyone was so loud. That’s when I knew, “There’s something here.”

A horror movie is not unlike a comedy in that way: If it works, people have a visceral reaction to it.

That’s how I approached this movie, and I don’t know if I would have done this had he not given me that advice. I would have gone in thinking, “I’ve got to scare people because this is a genre film,” and it would have been horrible.

The film is expected to be a strong Oscar contender in the two sound categories, which people often mix up. Since sound was such an important part of your movie, it strikes me that you might be the perfect person to explain the difference between those two categories. 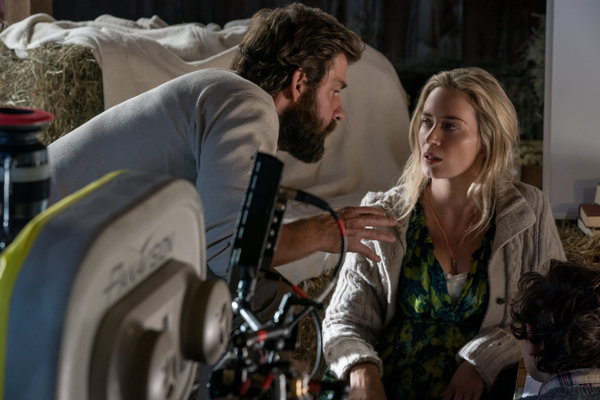 There’s sound mixing and editing. The editing is getting all the sounds in place, putting this sound next to that sound. Sound mixing is making sure they all come together to sound real. If crickets were as loud as the music, it would be insane: You have to diminish the crickets to whatever it’s supposed to be to feel real. That whole idea, I thought I understood until I did this movie. It can either be a tool set that will fix things, or it can be a magic kit where you blow the lid off and start concocting potions of sound. That was mind-blowing to me.

At the same time, if a movie really works, it may play well even without sound — when you’re watching it over someone’s shoulder on a plane, for instance.

The truth is that I did that exactly for the first month of editing. On the first day or two, I was going through different sounds with my editor to equalize it out, and I just said, “Hit mute.” And we hit mute for what might have been five weeks. The first cut and the second cut were all done without one ounce of sound. I needed to be able to connect with these characters without anything else.

When you had that silent cut, did you ever think, “This could practically be a complete film on its own?”

One hundred percent, and that sounds super pretentious, but it’s true. Even on silent, there was so much communication happening. I didn’t think our movie would be so commercially accepted because the only other time I’ve seen someone do a movie with no spoken dialogue is Paul Thomas Anderson at the beginning of “There Will Be Blood.” That first 12 to 14 minutes where Daniel Day-Lewis doesn’t speak was a huge touchstone for me.

Paul Thomas Anderson hosted an award-season screening for your film. That’s got to be gratifying.

I think I’ve only told my wife this, so why not say it in an interview: That was the moment that was the most surreal of all this. He emailed me and said, “You need to call me,” and we talked on the phone and he was so specific and so honest about the movie. He’s been so kind to me through my career, but we were talking like we were on an even playing field and that tripped my wires. What I love most about Paul is that he loves movies.

I’ll tell you a big life lesson. Paul was over at my house, I think it was my 30th birthday party, and I had just seen a movie I didn’t love. I said to him over a drink, “It’s not a good movie,” and he so sweetly took me aside and said very quietly, “Don’t say that. Don’t say that it’s not a good movie. If it wasn’t for you, that’s fine, but in our business, we’ve all got to support each other.” The movie was very artsy, and he said, “You’ve got to support the big swing. If you put it out there that the movie’s not good, they won’t let us make more movies like that.”

Dude, Paul Thomas Anderson is out there on the wall for us! He’s defending the value of the artistic experience. He’s so good that maybe you project onto him that he’s allowed to be snarky, but he’s the exact opposite: He wants to love everything because that’s why he got into moviemaking. And ever since then, I’ve never said that I hate a movie.

[John Krasinski explains how he went about writing “A Quiet Place.”]

You’re writing a sequel to “A Quiet Place.” Does it worry you that the first film was such a big hit that Paramount may treat this like the “Purge” franchise, cranking out new installments on a yearly basis?

Totally. I can’t stop them from doing that. I’m a realist, I know how the studio operates. At first, I wanted nothing to do with a sequel — I told my wife, “It can never be this good again.” And she said, “Of course it won’t. Take this movie, put it on a mantel so you can look at it anytime you want, and then go out and do something else.”

Paramount was asking a bunch of writers and directors what they might do with it, and to their credit, they didn’t take any of those pitches because they felt a little more franchise-y. Meanwhile, I had this tiny idea that fit that world and could be exciting. Paramount asked if I would write it and I’m doing that now, but I’m still thinking about what I want to do next. If I can crack the idea, I would love to direct it again, and if I can’t, I would love to give it to someone else with my fingerprints on it to make sure it’s being taken care of.

I know that anyone reading this will be like, “Yeah right, art guy,” but I do have sort of a parental feeling about this movie, and I don’t want “A Quiet Place” to turn into an action movie where 400 people have machine guns. Or did I give away the ending to the sequel? [Laughs.]