It’s time to start shutting up again. In its second season, “A.P. Bio” gives reprobate high school teacher Jack Griffin (Glenn Howerton) an even more morally bankrupt reason to be awful, and by extension, awfully funny. Having set the curriculum for gleefully selfish schemes in Season 1, the NBC comedy from former “SNL” writer Mike O’Brien updates the syllabus to broaden the scope of Jack’s pomposity and ploys in the show’s sophomore outing.

The disgraced Harvard philosophy scholar who had lost his dream job to an academic rival is now stuck teaching advanced placement biology in his hometown of Toledo. Instead of teaching his class, Jack mined their brilliance to carry out a personal vendetta in Season 1, and this year, their exploitation continues.

“I’m going to describe how the good, hard-working people of Toledo have unlocked the secret to happiness through simplicity,” Jack explains of his new philosophical thesis, which he expects will gain him acclaim, money … and his ticket out of Toledo. Naturally, he conscripts his students to help research these ordinary folk in their everyday lives and perhaps even learn what it means to achieve Beer o’clock. 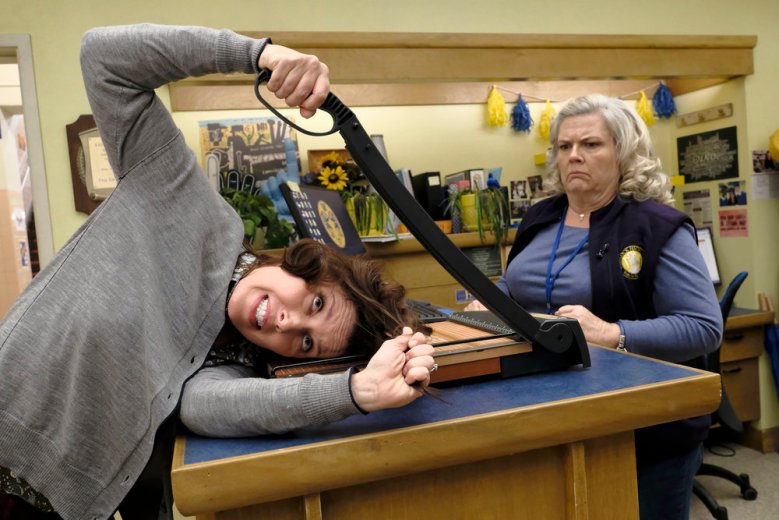 The sheer condescension that fuels Jack’s thesis is breathtaking in its arrogance. In this way, “A.P. Bio” has become more confident in its tone and characters in Season 2. Very little time is devoted to setup before jumping into the wicked and wacky shenanigans, which includes working at a butcher shop and revisiting Jack’s childhood church. Also, the secondary characters are now entrusted with their own storylines, which creates fresh dynamics and opens up the narrative possibilities. Viewers will feel an immediate difference from pairings like Principal Durbin (Patton Oswalt) and his assistant Helen (Paula Pell) on their own good-hearted yet misguided adventure or the teacher trio of Stef, Mary, and Michelle (Lyric Lewis, Mary Sohn, Jean Villepique) operating more as individuals instead of a glorified girl group.

More importantly, the show starts to distinguish the students in the class independent of Jack, which means an exploration of teenage angst “A.P. Bio”-style. With this increased definition in their characters come new insights into their individual wretchedness. Compared to Jack, the students might be more innocent, but they are by no means pure.

This is the key to why “A.P. Bio” continues to be so much fun to watch. It is unrepentant in how it embraces the naughty, transgressive side of humanity. Jack is not a nice person, but he is living the Id-driven dream. His student Heather (Allisyn Ashley Arm) doesn’t fall in with his schemes just because he’s in a position of authority; she follows him because it appeals to the dark, mutinous part of her soul.

Despite this penchant for rebellion and wrongdoing, “A.P. Bio” isn’t in danger of devolving into a the bleakness of “Breaking Bad.” It’s just removed enough from reality to feel safe. Even its blue-tinged cinematography by Blake McClure (“You’re the Worst,” “Drunk History”) gives the entire show a sheen of fantasy and distance. This cool color palette contrasts with the real-life interviews in the sneak peek of Season 2 below:

Because of this, “A.P. Bio” is a show that can happily live in a state of disgrace. It provides a safe space to fail, to backslide, to hit rock bottom and stay there… until one is ready to climb back up. Each day, Jack shows his disdain/comfort by telling the class, “Start to shut up,” and then tossing his partially eaten apple in the general vicinity of — but never in — the wastebasket. In this classroom, if the apple never makes it into the trash it’s not just OK; it’s liberating.