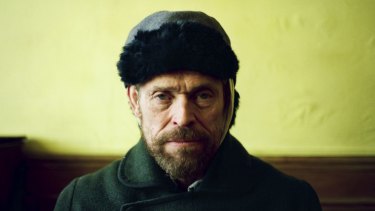 Besides being among the most beloved of painters, Vincent Van Gogh has been a gift to cinema. Superficially at least, everything in his biography aligns with Romantic myth: his sense of oneness with nature, his mental health issues culminating in one of history's most famous acts of self-mutilation, his poverty and obscurity during his lifetime and subsequent worldwide fame. 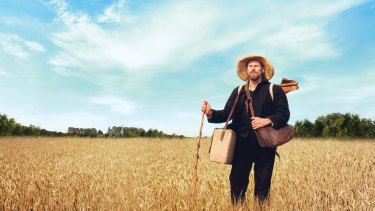 No wonder his life story has been chronicled by filmmakers as different as Vincente Minnelli, Robert Altman and Maurice Pialat (not to mention Australia's own Paul Cox). The latest to attempt a biopic is Julian Schnabel, who unlike most of his predecessors in the field is a painter in his own right – in financial terms, a far more successful one than Van Gogh.

A New Yorker with a cosmopolitan sensibility, Schnabel since the 1990s has developed a sideline as a filmmaker, working both in Europe (The Diving Bell and the Butterfly) and on home turf (Basquiat). At Eternity's Gate, his fifth feature, has many of his hallmarks: a visionary protagonist, an appealingly decorative visual style, and a relative lack of story sense.

An international production with the American star Willem Dafoe in the lead, At Eternity's Gate gives a loosely factual account of Van Gogh's agonised yet productive final years, spent partly in the outskirts of Paris, partly in the South of France. Schnabel's interest, however, centres less on the man than on the artist: what would it be like to see the world through Van Gogh's eyes?

The answer comes in the form of a barrage of "subjective" effects – some corny, some authentically inspired. Wheat fields and trees in autumn shine out at us in brilliant colours, often viewed through distorting wide-angle lenses; lurching editing seems intended to mimic the mood swings of manic depression. Considerable screen time is devoted to the act of painting, filmed by cinematographer Benoit Delhomme in a handheld, unsteady fashion that emphasises the risks taken with each brushstroke.

In his choice of leading man, Schnabel has himself taken a significant risk: Dafoe is in his 60s, whereas Van Gogh died at the age of just 37. But the gamble pays off, on the visual level above all. With his shock of orange hair and heavily lined face, Dafoe seems neither old or young. Or rather he seems both at once, ravaged yet vivid – in short, not too far from the figure we encounter in Van Gogh's self-portraits.

Insistent on painting outdoors, the character is positioned as one enigmatic natural phenomenon among others, with Dafoe's singular physical talents put on full display: he turns his face into a mask of anguish, and contorts his body into poses that might appeal to a sculptor, as when he huddles up to his brother Theo (Rupert Friend) like a child with its mother.

Through all this, however, it's hard to shake the sense that Schnabel and his collaborators are reinventing the wheel. Even a virtuoso like Dafoe can't wholly make the tortured-artist archetype seem fresh, any more than the veteran screenwriter Jean-Claude Carriere can save the film's faux-naif romanticism from becoming cloying.

The focus on Van Gogh's solitary agony feels vaguely at odds with Schnabel's own air of sophistication, of knowing the right people as well as the right stylistic moves. Through no fault of their own, the big names in the supporting cast give the film the feeling of a TV special where celebrities might drop by.

Mathieu Amalric has a genial cameo as Dr Gachet, the subject of one of Van Gogh's most famous portraits; Oscar Isaac is a swashbuckling and charismatic Paul Gauguin, despite being saddled with some classically awful biopic dialogue ("So good to see you, Vincent, and this fine group").

Most effective is Mads Mikkelsen as a priest who serves as a spokesman for orthodoxy, resisting the excesses of Van Gogh's painting and his grandiose way of comparing himself to Christ; their war of words, presented in stark, alternating close-ups, is one of the film's most powerful passages. Here and throughout, the best tribute to Schnabel's natural talent as a filmmaker is that it's the images which stick in the mind – far more than any of the windy exchanges about nature, God and art.