Young gun Dylan Wenzel-Halls has come off the bench to secure the Brisbane Roar a 1-0 A-League win over Wellington Phoenix at a rain-lashed Suncorp Stadium.

The 22-year-old forward, who hadn't featured for the Roar since mid-December, made the most of his second-half substitute's appearance to score the only goal of Saturday's game in the 69th minute. 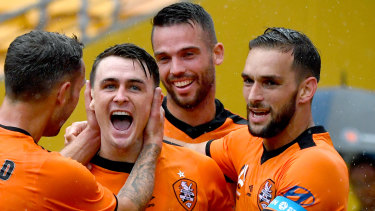 Wenzel-Hall's strike extends Brisbane's unbeaten run to four games, and moves them up to seventh on the ladder, just a point outside the top six.

The defeat ends a nine-match unbeaten run for the fourth-placed Phoenix, who will head back across the Tasman ruing a wasteful first half.

The Phoenix hit the crossbar twice through Jashua Sotirio and Steven Taylor in the opening half, while Sotirio also sent a good chance sailing over the goal after getting behind the Roar defence.

Brisbane defender's Scott Neville and Daniel Bowles stopped the visitors with last-gap defending, and there was a strong penalty shout for the visitors when a Sotirio shot appeared to strike Jacob Pepper's arm.

Having been on the back foot for most of the opening 45 minutes, the Roar fought back in the second half as the heavens opened with torrential rain.

Roar coach Robbie Fowler threw on recruit Scott McDonald early in the second half but the former Socceroo was overshadowed by the display of his fellow substitute in Wenzel-Halls, whose first goal of the season came just minutes after he came on to the field. 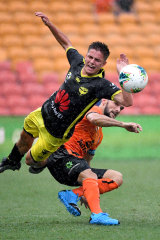 Cameron Devlin (left) of the Phoenix is tackled by Jack Hingert.Credit:AAP/Darren England

The Phoenix attempted to find an equaliser, but again lacked a cutting edge in front of goal, although Mexican schemer Ulises Davila did force a smart diving save by Roar goalkeeper Jamie Young with a strike from outside the box in the 82nd minute.

The Roar had to dig deep in the final minutes to seal the win when Wenzel-Halls broke clear down the right and fed in-form winger Brad Inman with the goal gaping, but Inman, who came in to the match with four goals from his past three matches, fluffed his lines and sent his shot wide.

The Phoenix will be without Matti Steinmann for next weekend's home match against Newcastle after he picked up his fifth booking of the season in the first half.

Brisbane travel to Gosford next weekend to take on Central Coast.