Few knew quite what to expect as Mollie O’Callaghan waited behind the starting blocks.

She was about to dive into the unknown, because the Duel in the Pool had been lost to Australian swimming for 15 years. Athletes were scrambling to find their names on event schedules to see when they were due in the water to compete for points. Even organisers were trying to wrap their heads around the format long after the races had started.

Yet as soon as Australian swimming’s fastest rising star hit the water, the Sydney Olympic Park Aquatic Centre erupted. At its core, the Duel in the Pool between Australia and the United States is a revival of the sport’s great rivalry.

O’Callaghan surged home to clinch the opening event on day two, leading an Australian team boasting Emma McKeon, Zac Stubblety-Cook and Brad Woodward to success in the mixed 4×100 medley relay in front of 3355 fans on Saturday night. It sets up a tantalising finish on day three with the US taking a 159-148 lead.

“It’s pretty sick,” O’Callaghan said. “It’s nice to come back after a big few months, it’s great to do it alongside these guys and especially in front of this big, humungous crowd.” 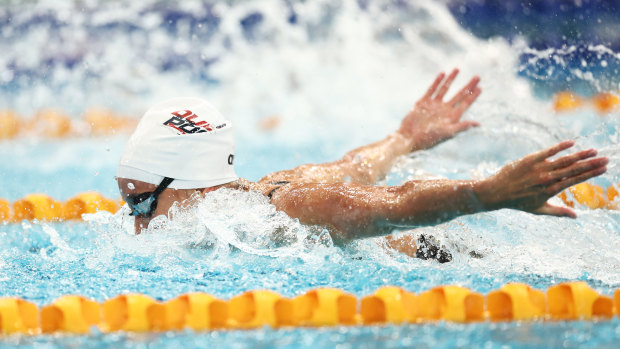 Emma McKeon was a star of the show in Sydney on Saturday night.Credit:Getty

It was as big as it was loud. Fans threw swimming caps and posters down to McKeon as she stood poolside, hunting autographs from Australia’s greatest Olympian who, like her teammates, relished the chance to compete without the pressure of a major international meeting.

Swimmers were here to win, no doubt, but enjoying a meeting like no other was at the top of the agenda as Swimming Australia looks to build on a bumper 12 months for the sport and engage a growing fan base.

They did so with what Stubblety-Cook calls swimming’s answer to Twenty20 cricket. Athletes competed in random order medleys – when swimmers learn the order of their strokes right before they start – and broken races. Teams could use power plays and flag frenzies to double their points in a race.

Then there were the mind games. On the final leg of a skins race, when just one swimmer from each team remains, a team can call a double dip and make those swimmers go an extra 50m. So McKeon coasted in what was to be her final lap of the 3×50 butterfly before Australia used a double dip. McKeon, with plenty in the tank, dominated Beata Nelson on a fourth lap to earn double points. 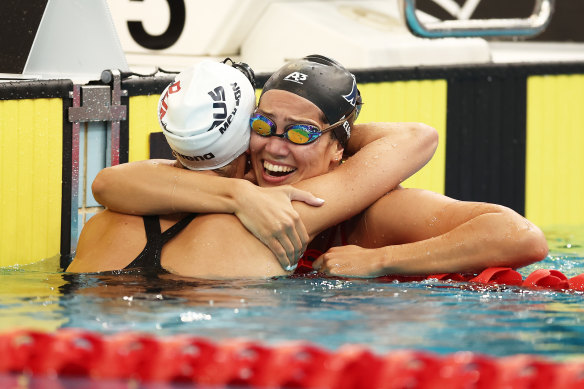 The Dolphins struck first in an open water relay at Bondi Beach on Friday and could become the first team to beat the US in the Duel in the Pool as the attention turns to day three on Sunday.

The event is a far cry from the norm, but it is just what many of the Australian team needed after nine weeks on the road at the world championships in Budapest and Commonwealth Games in Birmingham.

“I’m not going to lie, I found the nine weeks away quite exhausting,” Australian butterfly swimmer Brianna Throssell said.

“When I came back to Perth for a period of time last week, I was really feeling it. I was sleeping for nine to 10 hours every night, just catching up on sleep.

“It was a really long time overseas, so it’s nice to go into this competition knowing there’s not as much pressure, you’ve just got to get up and race for the team. There’s not that many events, it’s all a bit of fun with mixed relays and things like that.”