The smallest of hits decided a huge pitching matchup.

After striking out three times against Scherzer, Gleyber Torres blooped a tying single in the ninth inning and won the game with a 50-foot single into a five-man infield that gave the Yankees a thrilling 4-3 win over the Washington Nationals on Saturday.

“Especially with the five-man infield, you don’t usually expect to see an infield single like that to win a ballgame,” Aaron Judge said. “But Gleyber’s been hitting the ball — he’ll hit it right at somebody 110 miles per hour and it’s an out, and sure enough he had two hits today that were 50, 60 mph off the bat — if that. That’s the crazy game we play.”

Scherzer, coming off a five-hitter that beat Miami at home last Sunday and the birth of son Derek Alexander less than two hours after the final pitch, struck out 14 in 7⅓ innings, allowed two hits and walked one.

“It’s pretty cool to join the club,” Scherzer said, “but it’s tough for me to put really put that in perspective. I think that’s more for other people, the other pitchers that pitched before me and obviously guys after me.”

In a matchup totaling five Cy Youngs, Washington built a 2-1 lead against Kluber on Juan Soto’s bases-loaded walk in the third and Starlin Castro’s single in the sixth that followed Kyle Schwarber’s double.

Kyle Higashioka’s home run on a hanging slider had tied the score at 1 in the third.

“If I could execute that pitch better, maybe we win the game,” Scherzer said.

Closer Brad Hand walked D.J. LeMahieu leading off the ninth, Judge hit an opposite-field single to right and Torres followed with bloop single to right that tied it 2-2.

“Just mechanically was a little bit off,” Hand said. “Had a tough time commanding my fastball.”

“Take a win any way we can get it,” Kluber said. “Every win counts the same, whether it’s a 10-0 game or you come back and kind of fight and claw and get one like we did today.”

McNeil and Lindor Lead the Mets to Win 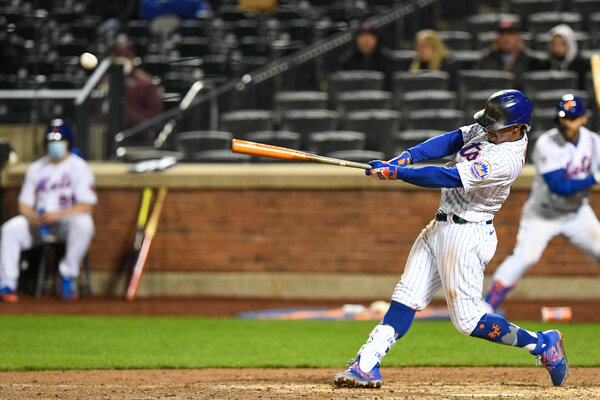 Jeff McNeil and Francisco Lindor teamed up to produce all four runs a night after scuffling in the dugout and the Mets beat the Arizona Diamondbacks, 4-2, Saturday night.

The pair attempted to dismiss Friday’s dust up by bizarrely claiming they were arguing over an animal spotted in the clubhouse tunnel — Lindor said it was a rat, McNeil’s story was that it was a raccoon or possum.

No critters Saturday — just a couple All-Star hitters. McNeil hit a two-run homer in the third off Merrill Kelly (2-3), and Lindor had a double, an R.B.I. and scored on a throwing error after a stolen base.

Five pitchers combined for an eight-hitter on a bullpen day for the Mets, who have won four straight. The Diamondbacks fell to 0-5 on a six-game trip, during which they have been outscored by 29-10.

Opener Tommy Hunter tossed two hitless innings before Joey Lucchesi (1-2) followed and earned the win after allowing one run over two and a third innings. Trevor May earned his first save with the Mets with a one-hit ninth.

Lucchesi drew a walk leading off the third against Kelly. McNeil followed with a homer, after which Lindor drew a walk, stole second — his 100th career theft — and raced home on a two-base throwing error by Diamondbacks catcher Carson Kelly.

In the seventh, McNeil beat out the back end of a potential double-play grounder, stole second and scored on Lindor’s single.

Josh Rojas reached via catcher’s interference in his first two plate appearances for the Diamondbacks, delivered their first hit — a single leading off the sixth — and scored their first run on a groundout by David Peralta.

Arizona was 3 for 11 with runners in scoring position Saturday after going 1 for 16 in such situations Friday. The Diamondbacks left the bases loaded in the seventh against Jeurys Familia. Pinch-hitter Stephen Vogt had an R.B.I. single in the eighth before Aaron Loup stranded runners at the corners by inducing Pavin Smith to hit a comebacker.