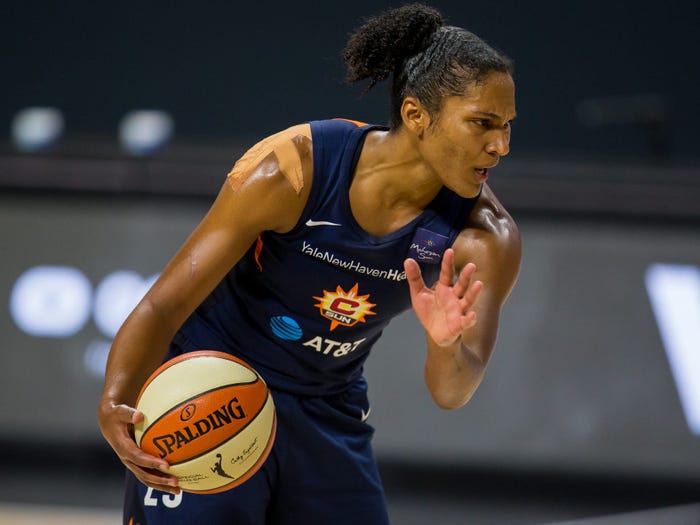 The seventh-seeded Connecticut Sun were already facing an uphill battle in taking on league MVP A'ja Wilson and her top-ranked Las Vegas Aces in the semifinals of the 2020 WNBA playoffs.

But without Alyssa Thomas, it may have been too much for Curt Miller's squad to overcome.

After the 6-foot-2 forward suffered a gruesome right shoulder dislocation mere minutes into Tuesday's game, Connecticut was confronted with the very real possibility of facing the Aces juggernaut for Game 3 of their best-of-five series without one of its foremost stars on the floor.

But Thomas — who has played a good portion of her career with a partially torn labrum in each shoulder — was having none of that.

"They pretty much left [the decision to play or sit] up to me depending on how I was feeling," Thomas said during her postgame media availability. "As soon as I heard that, I knew. I knew I'd be out there."

Despite literally having her shoulder forced back into its socket — an exercise so agonizing that players could hear her screaming from the locker room as Tuesday night's game continued without her — Thomas miraculously found her way back into playing shape. She had been listed as "out" in the Sun's injury report Wednesday before getting upgraded to "questionable" midday Thursday. By tipoff at 9:30 p.m., the two-time All-Star was back on the court as one of Connecticut's starting five.

And Thomas didn't just play; she engaged in a grueling physical battle in the paint against Wilson and WNBA Sixth Woman of the Year Dearica Hamby for a full 39 minutes. When all was said and done, Thomas had racked up a game-high 23 points, 12 rebounds, four assists, and three steals to lead the Sun to a 77-68 victory.

It took its toll.

Now, Thomas and her Connecticut squad are just one win away from punching their ticket to their second-consecutive WNBA finals appearance despite starting the playoffs as the penultimate team in the rankings. Should the Sun take down Las Vegas in Sunday's matchup, they'll play either the Seattle Storm or the Minnesota Lynx for this year's title.

And though Thomas will almost certainly be even more banged up and bruised should Connecticut reach that point, there's little doubt she'll persevere through the pain to help the Sun bring home their first chip in franchise history.

"She's just a warrior. There's nothing else you can say," Miller said. "She just is as competitive a person as I've ever been around. You're going to have to amputate that arm and shoulder before it's going to keep her out."